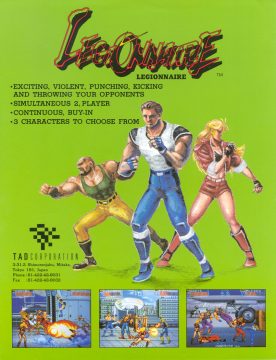 Blood City used to be such a nice place. However, the Crimson Gang has overrun the district with crime and corruption – the only citizens willing to fight back is a four member group that calls themselves Legionnaire. In a desperate attempt to break their spirit, the Crimson Gang captures one of them, leaving the rest to beat up everyone else in the city to find them.

This is fairly typical setup for Legionnaire, which is also a fairly typical Fight Final-type beat-em-up. The game was developed by TAD Corporation, formed by some Data East employees, and mostly known for the gallery shooter Cabal and the oddball monkey side-scroller Toki. It was one of the last games developed by them before they closed, with much of the staff moving to Mitchell Corporation. The Japanese title translates to “Final Fighting Nobles: Legionnaire”. 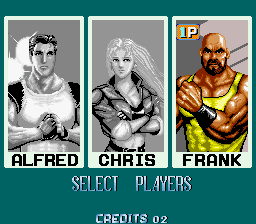 You pick from one of the three remaining members of the team – Alfred, Chris, and Frank – in order to pummel through a series of bad guys and rescue Judy, who actually looks a lot like Lucia from Final Fight 3, released a few years later. Even the between level cutscenes are reminiscent of Capcom’s classic, presenting a map of your five level journey, though it also shows the level boss’ portrait and a short quip about them.

The controls should be familiar, though even for these type of games, it’s fairly simple and stripped back. There are no weapons (with the exceptions of explosive canisters), and while there are tons of boxes to smash, they mostly just hold health or score items. The moveset is fairly small too, and even the health-consuming special attack – where your fighter jumps into the air and drops a grenade towards the ground – is identical between the three characters. The most distinctive addition is the ability to dash, executed by tapping the jump button twice. When you hit the attack button, you’ll either execute a dashing attack with a powerful swipe, or if you’re right on top of an enemy, grab and throw them. (This is the only way to throw enemies, as you can’t nab them when stunned like in other beat-em-ups.) This changes the pacing slightly, although it’s a little awkward to pull off since one slightly mistimed button press will make you jump instead. Also, if you hold up or down at the end of a combo string, you’ll pummel them across the screen instead of knocking them down, giving you some extra crowd control. (This is reversed for Frank, who smacks them to the other side by default.) In spite of the simplicity, the game controls fairly well and is accurate to the other type of games it aping. 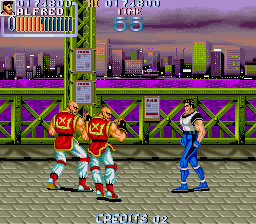 Where Legionnaire becomes memorable is in the small details of its otherwise seemingly archetypal cast of enemies. There are dwarves wearing claws and occasionally suicide bombers that leap from the sky. A particularly weird enemy with a huge nose and goggles only takes a single hit before running away in panic, dropping bonus items as they scurry off the screen. One of the bosses, a hulking woman who breathes fire, will, every once in awhile, look at the screen and flash the middle finger at the player. Then there’s the guys who give a goofy-as-hell yell before barreling towards you like a linebacker. Most of the enemies seem like normal beat-em-up gang members, except for the fourth level boss, who has extending limbs and draws a sword out of his arm. It’s actually disappointing that the penultimate bad guy is just a classy bearded man in a red suit.

You beat him once, then head off into a space station (!!) for a final encounter, but rather than anything surprising, you just fight him again, except he has a pair of electric claws. At least the ending, which shows off the cast in their post-game life, is fairly atypical – Alfred and Judy settle down and raise a family, while Frank follows his long standing dream to set up a hot dog stand. There’s also the question of the title – what exactly is a “Fighting Noble” supposed to be? It seems to be a slightly goofy/pretentious way to just refer to a vigilante gang – everything seems classier when you give yourself a French name. 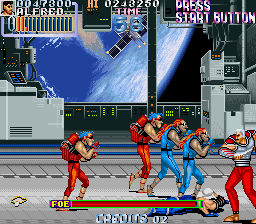 Legionnaire once had a reputation as a lost game, as its copy protection prevented it from being properly emulated in MAME. As a result, it was basically forgotten until the MAME team decrypted it. In the end, it’s nothing special outside of its sporadic bits of weirdness, but preservation is always a worthwhile endeavor regardless of quality.