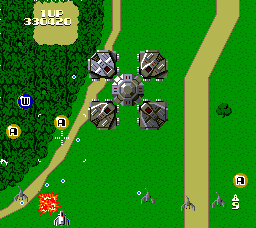 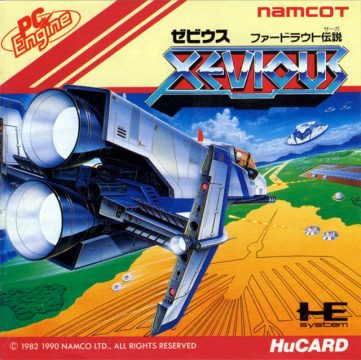 The MSX2 Fardraut Saga ended with the message “See you again next game -Episode 2 Final Weapon”, and so Compile kept the promise: Fardraut Saga on the PC Engine, despite sharing the same name, is not a mere port of the MSX2 version, but rather a whole new game. It still allows to choose between an original mode (a flawless port of the arcade which stands as the best conversion of the pre-PlayStation era) and a four stage “story mode” that’s even nastier than the MSX2 one. The story is told via cutscenes, and the player doesn’t get to pilot the Solvalou until stage three: although Solgrado, Zeodalley & Gampmission are nowhere to be seen, the first stage is played in a small craft, while the second resembles an enemy Tarken scout ship. Once again the game reacts to the player’s performance – a little too effectively, perhaps: it’s not easy to decide whether it’s even worth to pick up power-ups, as enemies become merciless quickly.

The graphics in this one are pretty much of arcade quality, if not better. The music is quite dramatic for a Xevious game, especially the third stage’s tune, a reprise of Fardraut Saga‘s MSX2 ending theme.