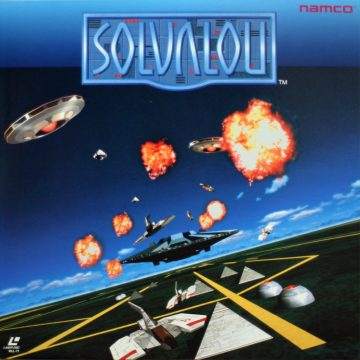 In 1991, Xevious fell into the 3D trap with an arcade game titled Solvalou. It’s a first-person on-rails 3D shoot-em-up very similar to Namco’s Starblade. Although the polygon models are very simplistic, seeing classic Xevious ships modeled in 3D is kinda cool. Some of the smaller flying enemies are just pre-rendered 2D sprites, though.

Only certain older versions of MAME are able to run the game somewhat properly (it works on 0.89) although some of the graphics are a bit messed up. More recent versions of the emulator look better, but the game always crashes halfway through the first stage. In Japan, Solvalou was released onto the Wii Virtual Console in 2009, being the first VC game to make use of the WiiMote’s functions for the cross-hair controls.