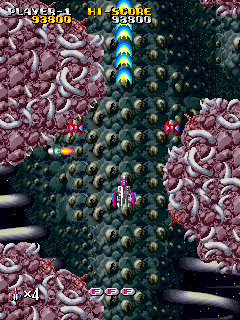 A distant cousin of the Terra Cresta series, Armed Formation F (also known as Formation Armed F) brings back the formation button – but not the docking ships – of past games in the series. When powered up, your Vowger is given escorts called Armers, which fire pairs of exploding spheres. A tap of the formation button reverses the direction of the Armers, letting you pick off enemies attacking from behind. Power ups change the Armers’ active weapons, while collecting an F icon lets you briefly send them outward, spreading their firepower. It’s a play mechanic not far removed from R-Type‘s Force Unit – the Armers can even shield you from bullets, although they can’t move independently of your ship as the Force Unit could.

Armed Formation F was created by an outside development team called Fillmore, led by Takanori Tanaka. Tanaka is a professional artist, painting backgrounds for the film The Cat Returns and the animated series Last Exile, which goes a long way toward explaining why Armed Formation F is more flamboyant than games in the mainstream Cresta series. Each level has its own theme, ranging from the Insect Stage with its tangled nightmare of fossilized bugs, to the Bone Stage, where the Vowger must carefully navigate through mold-caked rib cages and graying lumps of flesh. The game is an ordinary shooter in most respects (and more cramped than many thanks to its vertically oriented monitor and barrier-filled margins), but at least its artwork makes a strong impression. Sadly, those striking visuals lose much of their impact in the PC Engine port, which relies on repetitive tiled graphics to squeeze itself into the tight confines of a 256K HuCard. 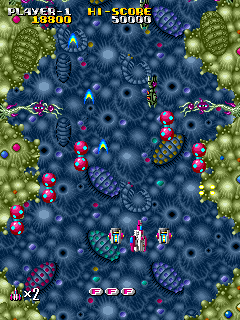 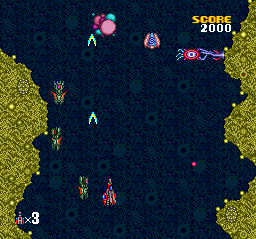