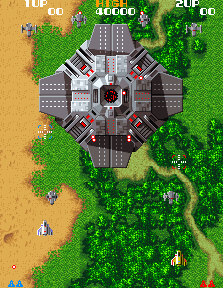 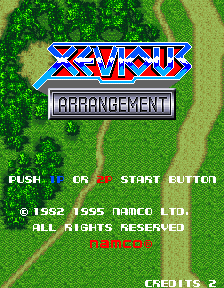 Xevious Arrangement should be in game design manuals under “how to successfully remake a classic game”. The game was originally included in Namco Classic Collection 1, a multi-game arcade board which also featured revamped versions of Mappy and Galaga. While playing mostly the same, Arrangement deals with some issues that made the original seem not having aged too well. First is the repetitiveness of the music: instead of just one tune that loops endlessly for the entire game, now each area sports a different music, although they all blend together in a long medley. 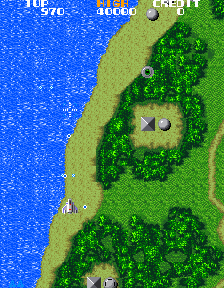 Second, the game was given a proper end at area 16, and the landscapes now alternate between classic South American forests and metallic GAMP bases (vaguely reminiscent of Capcom’s Exed Exes), to differentiate a bit. Three uber-hard extra areas are available as well for those players with superhuman reflexes that manage to complete the game. The Andor Genesis underwent a facelift as well, and they are all different from each other now. Compared to the audio/visual update, the gameplay remains mostly unchanged. The most welcome addition is the simultaneous 2-player coop mode. Some enemies were added from the 8-bit system ports, like the horizontal flying Bacuras. The Solvalou can pick up a power-up item that increases the Zapper’s fire, although it’s sparse to get and the game retains the “no powerups” feel of the original. All in all, it’s a nice update, especially pleasing to play due to the quality of its electronica soundtrack.

The only home version of Xevious Arrangement was included with Xevious 3D/G+ for PlayStation. It is an arcade perfect port, at least in tate mode.