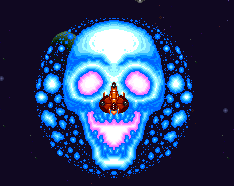 Truxton or Tatsujin (Japanese for “Expert”) is a nearly legendary game, at least among Japanese shoot-em-up enthusiasts. Back before the days of danmaku, tiny hitboxes, and secret final bosses, it was initially thought to be one of the hardest games ever created.  Enemies are fast and abundant, checkpoints are scarce, and bosses are huge. It became the centerpiece of many strategy guides at the time, and due to its recognizable patterns, it eventually became easy to clear by veterans, but it’s still retained its reputation over the years as one of the Toaplan’s first truly great shooters.

The story involves a galactic overlord from the Gitan empire assembling five asteroids and sending them all straight toward your the Borugo homeworld. And so, one tiny, poorly equipped space ship called the “Super Fighter” is sent against all odds to defeat these insurmountable forces. 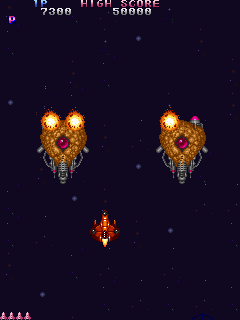 Truxton is fundamentally similar to Toaplan’s earlier shooters, Tiger Heli and Kyuukyoku Tiger, but fixes their major issues. Even in its weakest state, your ship always has a trusty three-way spread gun that. Like Twin Cobra, the weapons pickups are colored. Red is the default weapon, while Green shots are powerful piercing lasers and Blue is a impressive lightning attacks which auto-aims at enemies. The most impressive weapon is easily the skull bomb. Functionally, it is a normal bomb that does heavy damage with a large radius and erases all enemy attacks upon use. Truxton goes the extra mile by making its bomb a large, awesome looking, screaming skull. In some versions, the skull bomb is accompanied with a star that goes around it that does noticeably less damage than the skull itself. No matter which version, the skull bomb is always its defining weapon, so much that it is prominently featured on every title screen of every version. The music is also amazing, composed by Masahiro Yuge, one of Toaplans’ most prolific composers.

The levels are also full of minibosses, usually more than one on screen at once. The main bosses are usually much larger than these sub-bosses and have special music to accompany them. Generally, the sub-bosses are harder to defeat than the main bosses, mostly because they attack in numbers. The checkpoint system is brutal, of course, especially since not all of them offer power-ups upon respawn.

There are five levels in total each separated into two areas – the approach, which takes place in outer space, and the actual asteroid. It’s somewhat cinematic, but graphically the outer space segments are a bit on the dull side. Sometimes once the ship actually enters the asteroid, level design can get creative, and the graphics here are indeed quite impressive. There is one high-speed section in the third area where, if you’re fully powered-up, you can get tons of bonus points and numerous bomb power-ups, which you can fire off rapidly. There are also colored levers throughout the game, which will grant you an extra life if you destroy them with the same colored weapon. If you’ve managed to stay alive without dying at all, some of the power up containers grant two extra lives. Along with the checkpoint system, bonuses like this stress how important it is to simply not die, which is naturally why the game is called “Expert”. 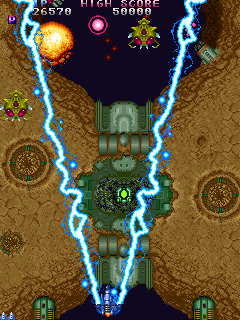 Truxton received two ports to home consoles, one for the Genesis and the other for the PC Engine. The PC Engine port was published by Taito and it may have been developed by Atlus, seeing as the sound arrangement was credited to Atlus employee Tsukasa Masuko. The graphics are brighter and the audio is muddled. There’s an added option screen where you can change the numbers of lives, bombs, credits and so forth.

The Genesis version was published by Sega and ported by Toaplan themselves. The visuals only inhabit about 3/4 of the screen, with the rest being taken up by a black status bar. It’s a bit easier than the arcade version, and it’s mostly faithful, though the fully powered up red weapon has been changed from a 15-bullet shot to a 9-bullet shot with an added barrier, that can absorb collisions with enemies but not bullets. There are five different endings in the Genesis version, one for each of the five loops, a nice bonus considering the arcade version didn’t have any endings at all, it just restarted on the next loop.

Amusingly, the music in this version plays at a faster speed than the arcade or PC Engine versions. This is because the developers only obtained the Mega Drive sounds specifications a mere two weeks before release, so the tunes were erroneously developed under PAL specifications. Therefore, when played in a Japanese or American NTSC system, the music is sped up by 120%. 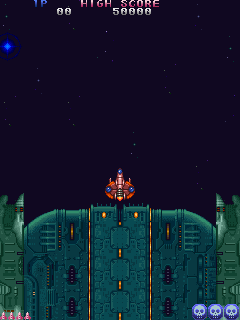 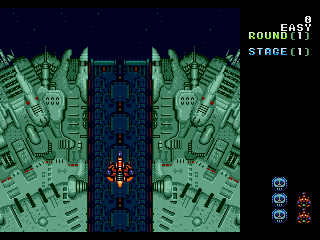 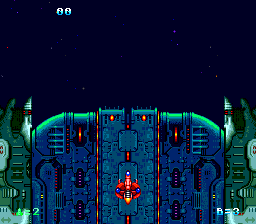 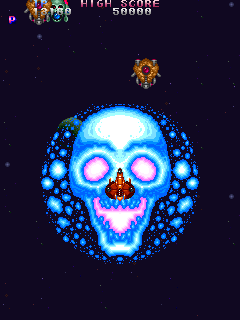 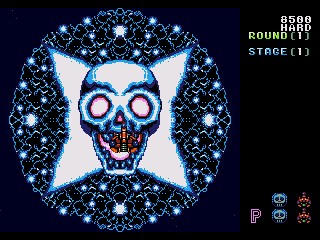 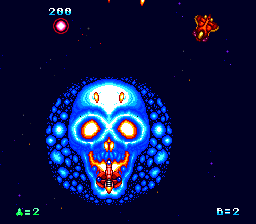