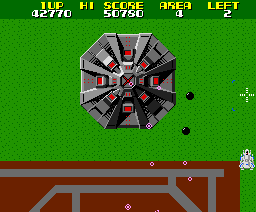 The next game in the series is Xevious: Fardraut Saga, released in 1988 for the MSX2. Developed by Compile, it features both a “Recon” and “Scramble” mode. The Recon mission is just a port of the arcade original, but Scramble mission is a new 16 area-lasting game where the player is initially offered four different crafts, each with different arsenals (as well as their own musical theme). Besides the original Solvalou, there is Solgrado (comes with a spread shot), Zeodalley (odd twin back fire) and Gampmission, a huge combination of the previous three with massive firepower and the beloved big lock-on from Gamp no Nazo. Each craft is assigned to one of the player lives. However, the more powerful ships are chosen for the trip, the more points are required to get an extend life; not only that, but enemies will become increasingly stronger as the game goes on. Destroying targets during Scramble will reveal power-ups, which increase the Zapper’s width and even its rate of fire. In exchange for all this additional firepower, the Scramble mode is much tougher than Recon from the very beginning. 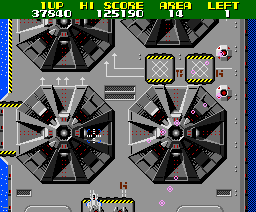 Although Compile’s logo is not shown in the game, the staff, led by Compile’s legendary Moo Nitani, had fun to name some of the new enemies with some funny in-jokes: they inlcude the “Pilecom”, the “Mootani” and even the “Alestan”!