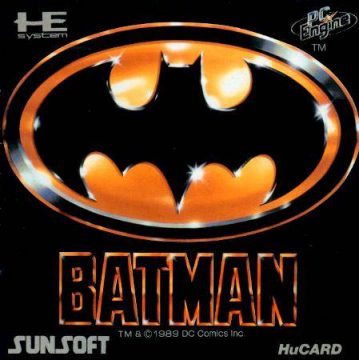 This would be Sunsoft’s final Batman game to tie in with a movie. It’s “based on” the 1989 film again but despite taking place in the film’s locations, it doesn’t really have a plot to speak of. In a weird change of pace, this game is actually a Bomberman clone! Instead of just defeating enemies, however, a few more twists are added with multi-screen levels and obstacles like busy streets to walk across. 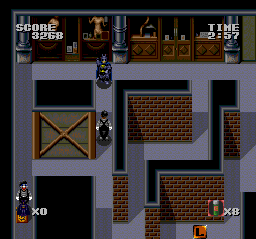 The real reason to play this game is to see it attempting to evoke the 1989 Batman film while presenting one of the goofiest, most boy scout like depictions of Batman since the 60s TV series. Crossing the street is a big deal in this game. You have to approach a crosswalk, wait for cars to come from each direction, then cross to avoid being run over. The game hilariously doesn’t even let you jay walk, you can only cross the desolate Gotham City streets where you see a traffic light and crosswalk. Now, unlike Bomberman, all enemies reappear regularly, and completing a stage requires finding a number of pieces of evidence scattered throughout each level. This is how most levels play out.

When you reach a museum that’s just been vandalized by Joker and his cronies, however, your task is to methodically walk around each gallery and clean every painting. It’s surreal, you’re just strutting around these narrow hallways incapacitating folks with batarangs and then wiping paintings with some kind of bat-anti-graffiti-cloth until you literally see them sparkle.

Batman’s only method of attacking is by standing in place and throwing batarangs, which can be pretty difficult. Whenever you lose a life, you lose any items you’ve gathered. Similar to Gradius, this leaves you moving at a hopelessly slow speed with only the most pathetic offensive capability. It can be nerve-wracking to waste time plodding around collecting power ups to do basic things like walk at a normal pace before attacking the meat of each level. Without the charming presentation of a Bomberman game and the expanded amount of tasks and larger levels, this gets very tedious. 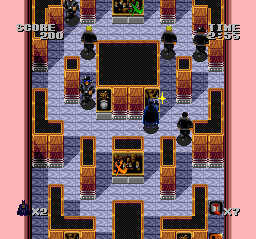 This PC Engine Batman game is not bad, but every gimmick in it will be exhausted long before the game’s many levels are completed. While the previous installments don’t outstay their welcome, this one gets boring before it’s even half over. Though it is worth a play for the fun music (the iconic first level song and some other previous Sunsoft tracks make an appearance) and generally colorful graphics. For obvious reasons this game was only released on the PC Engine in Japan and was never ported to any other region or system.