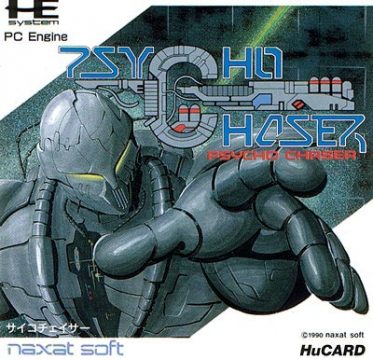 While Japanese game developer Sting is most famous for the unusual combat systems in their various RPGs as well as for creating the gloomy cult adventure game Baroque, they actually started fairly small. Their first game is a little known PC Engine shooter titled Psycho Chaser. Made by only five people, it’s an impressive debut that already shows off the strong atmosphere and unique power up systems that Sting’s later work would become known for. The game’s programmer, Shinichi Abe, is also the main programmer for Baroque, and the other five members of Sting that made Psycho Chaser stuck together for a while as well. While Psycho Chaser was originally published by Naxat, most of Sting had previously worked for a variety of developers and publishers. The most notable would be programmer Toyofumi Kunihiro, who designed Xevious: Fardraut Saga (1988) for Namco as well as the excellent PC Engine port of Truxton (1992). 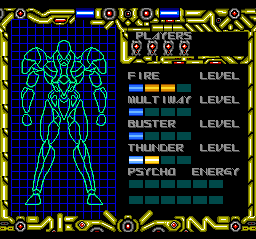 The premise of Psycho Chaser is pretty basic. You control an android, the titular Psycho Chaser, sent out by humanity to destroy an evil AI that’s out of control. Along the way you fight a pretty nice variety of enemies consisting of small flying drones in the air and larger mutated life forms on the ground. Compared to other overhead shooters, Psycho Chaser‘s protagonist feels very powerful. A slowly marching robot rather than the futuristic aircraft one normally plays as in this kind of game, his default weapons is a rapid line of fireballs that quickly destroy almost anything in their path. The trick though is that enemies will approach you from all sides, and you can’t afford to let any survive for long or you’ll quickly get cornered, so you have three other more specialized weapons you need to quickly switch to and from to destroy them efficiently. There is also plenty of debris you want to avoid running into. While touching the scenery won’t damage you like in most overhead shooters, it’s very easy to get trapped between a rock and an endless hail of enemy gunfire if you’re not careful.

Despite the simple setup, Sting does a few interesting things with the game. While he is featured prominently on the game’s cover, in the game itself you are never shown Chaser’s war torn face until the last boss is beaten and the credits have rolled. Instead, the instant you turn on the PC Engine on you hear the explosion sound effect used whenever your character is destroyed as a screen filling image of his torso being blown apart fades in. The huge mechanical heart that is the source of his attacks briefly dominates the screen (iconography of this heart rather than the hero itself used to show the number of lives the player has remaining rather than the android’s face). A fast, desperate theme song plays as the game’s logo fades in. It’s a basic but very efficient way to tell you in two seconds how the game is going to feel and what it’s about, an impressive detail for a small developer’s first game on limited hardware.

The first level is simple enough, the screen scrolls at a pretty slow pace, and enemies come in predictable waves. There are only two bosses in this level, and the second one is just a slightly more mobile version of the first. It’s not particularly easy, but is a good way to ease players into the rest of the game. From the second level on the screen scrolls significantly faster, and there is a much larger array of aggressive enemies to deal with along with many more obstacles to navigate around. Each level also has something unique to it, as an example the second area lets you actually destroy most of the obstacles, while the fifth level takes place on a series of narrow walkways to limit your movement options. 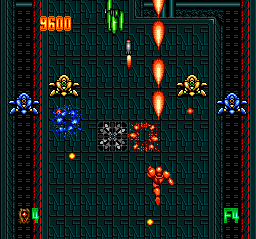 Enemies become much more durable from the second level on as well, but luckily Chaser has a way to make his own weapons more powerful. Throughout the game, destroyed enemies will drop shards of “Psycho Energy” you can pick up. Between levels you can redistribute these between your four weapons to change their properties and make them more damaging. It will be a while before you have enough to maximize every weapon, but the great thing about this is that each time you lose a life you can redistribute them any way you want to try out new tactics. It’s a cool idea that gives you some breathing room to play around with the weapons more deliberately than with most shooters. It does make the first two levels of the game a bit difficult though as your options are very limited before building up your stock.

Psycho Chaser, while simple, plays great. The backgrounds are repetitive (though they get better as the game goes on), but the enemies are varied, as are the six bosses you fight at the end of each level. Each boss move and attacks in a unique way, forcing you to move around the entire screen and quickly make use of all of your weapons to survive. It’s also impressive that the game has a large number of enemies and projectiles on the screen at once with almost no flickering or slowdown. 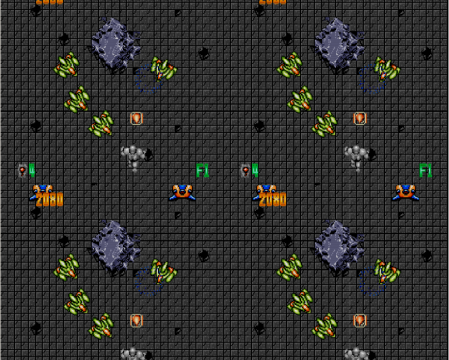 There is one more notable thing about Psycho Chaser, it’s one of a few PC Engine games that can be played with four split screens without any extra slowdown. This feat is accomplished by the PC Engine being able to output multiple resolutions on the fly, though very few games on it actually take advantage of this to improve the game itself (two prominent examples that do are Art of Fighting and Order of the Griffon). In Psycho Chaser the feature mainly exists so you can smugly point out to your friends how their Super Nintendo and Sega Genesis can’t do that.

Structurally, Psycho Chaser is a pretty by the numbers overhead shooter, but we can already see the focused design philosophy Sting displays in their later games thanks to its unique power up system and consistently desperate atmosphere. While relatively unknown today, it does have a small cult following amongst PC Engine fans and did actually get released on the Wii Virtual Console in Japan. Psycho Chaser‘s cool soundtrack and weapons make it worth checking out even today.