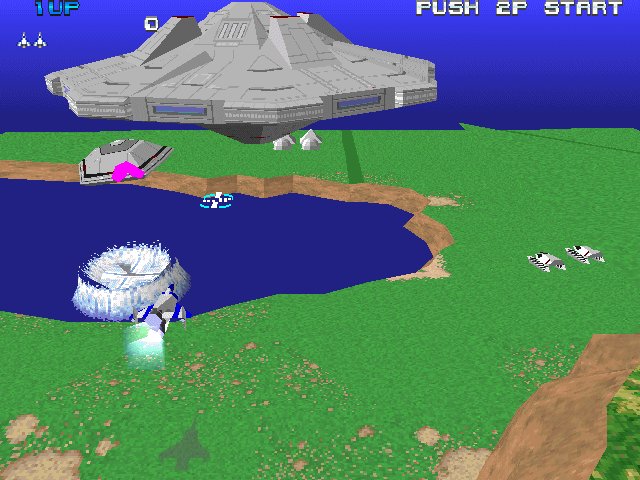 Xevious 3D/G was released in arcades in 1996, and shortly thereafter on the PlayStation, under the title Xevious 3D/G+. The graphics are again 3D and pretty bland (despite the use of the PlayStation’s high resolution mode, which was uncommon for the time), but the game returns to the formula of a traditional vertical shooter, instead of the first-person viewpoint of Solvalou. The player ship can now equip three very powerful weapons, including a massive laser and a homing electric tentacle, which may target both air and ground enemies. It’s still possible to bomb the ground in search for SOL towers and such, but much of the original’s charm is gone: the game is more of a nostalgic homage, and doesn’t feel like a real sequel. Still, it’s hard to complain when the music score is composed by Ayako Saso and Shinji Hosoe.

Faithful to Xevious‘ legacy, the game was filled by Namco with easter eggs, from the signature hidden messages to cameo appearances of Pooka from Dig Dug. Best of all is the cheat that transforms the Solvalou into either Paul or Heihachi, of Tekken fame. They were even given their own hilarious ending FMV sequences. The PlayStation 3D/G+pack comes with the original Xevious and its Super and Arrangement versions as well, so it contains pretty much all a Xevious fan needs.