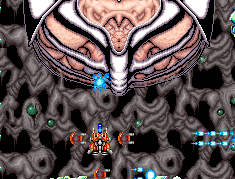 Released in 1988 by Irem, Image Fight was released a year after their massively influential R-Type. There are some similarities between them, as with most other Irem shoot-em-ups, though the main difference is that it’s a vertical shooter rather than a horizontal one. But while the game is well recognized inside of Japan, it never achieved any real international success.

The story takes place in the year 20XX, as the moon is destroyed by an alien force. (These are from the Boondoggle Galaxy, according to the English NES instruction manual.) They have also taken over the moon’s still-intact military computer, Mariko, and have used it to produce ships to destroy the humanity. The only hope for survival is the Orbit Fighter-1 (OF-1) Daedalus ship. 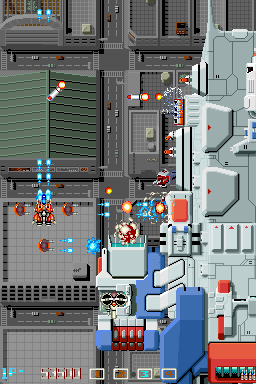 There are eight stages in total, though the first five levels are technically training missions. These are meant to be like holographical simulations, the “image” part of Image Fight. After each stage, you’re graded on the number of enemies you’ve destroyed, which is then averaged together with your performance throughout the rest of the game. If it’s above 90%, then you pass the test, with the remaining three missions being the “real” fight against the aliens. Fail, and you end up an incredibly difficult “penalty zone” level. If you manage to clear this, then the game resumes as normal.

The game resembles R-Type in that it’s relatively slow and methodical. A single hit will send you back to an early checkpoint, and many areas are heavily reliant on memorization. Beyond that and some graphical flourishes – the design of the OF-1 is similar to the R9, and some of the enemies bear some resemblance – there really aren’t any other connections.

There are two separate weapon systems. From power-up containers, you can grab pods, colored red or blue, which are positioned around your craft. Blue orbs only fire upwards, while red pods are aimed in the opposite direction you’re moving in. These pods cycle colors when revealed, so you can pick and choose how to equip yourself. You can equip three at a time, and mix and match the colors, prioritizing whether you want a powerful forward firing attack or a more versatile offense. There is a weird catch though – if you have three pods and grab one more, it will change all of them to the selected color, rather than just one. You can also command your left and right pods to execute a short range attack, after which they’ll boomerang back into formation. 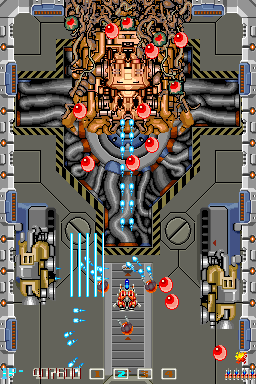 Your ship’s main weapon can be replaced by grabbing a weapon accessory, attached to the front of your ship. There are nine of these in total, with attacks ranging from forward firing lasers to homing shots to V-shaped blasts. The wide variety of weaponry recalls Compile shooters like Zanac and Aleste, but they’re only dropped in pre-determined POW boxes, and many of the weapons are quite uncommon, so it rarely feels like you have full access to the game’s arsenal. These also act as simple shields, as it will protect you from a single frontal attack, though it will destroy the weapon in the process. However, there’s also another quirk – once you equip a weapon, you can’t grab another one until the current one is destroyed. You can’t manually jettison it either, if you see something you want to switch to, you need to intentionally get hit and then grab the new weapon.

You can also switch between speeds, a feature which became common in many later shoot-em-ups. Your speed configuration also determines the shape of the OF-1, which is a cool touch. Shifting speeds will also let out a small blast of fire from the rear, which can be used to damage enemies, though in practice it’s tough to use effectively.

As to be expected from an Irem shooter, Image Fight is incredibly difficult. Many enemies take several hits to kill and approach from off-screen without warning, and checkpoints are sparse, Technically this is no different from R-Type, which frustrated in the same manner. But R-Type also gave you the Force Pod, which encouraged creative use to defeat otherwise seemingly insurmountable scenarios by acting as a shield or attacking in areas that were otherwise out of reach. In spite of its difficult situations, you had a powerful tool to use in your favor. Image Fight has a huge arsenal, but there’s nothing that functionally replaces the Force Pod. 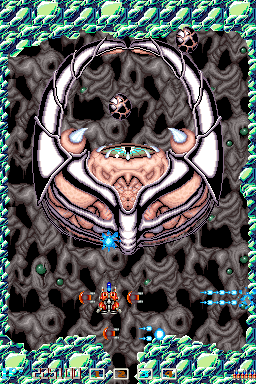 There’s also the fact that R-Type has an incredible visual style and a appropriately creepy soundtrack, which coupled together, created an atmosphere like no other. Image Fight‘s visuals are impressive on a technical level, but they lack the distinct character of Irem’s other games. The first few levels are standard late 80s shooter sci-fi, and while it gets creepier and more alien as they process, the visual style resets once you graduate from the training missions, and the final three levels are nothing exciting. The music is also forgettable at its best and abrasive at its worst. As a result, there’s not really a lot here for anyone that isn’t a shoot-em-up expert up for the game’s extraordinary level of challenge.

Still, the game is sourced as an inspiration for other now-classic shooters. In particular, Hiroshi Iuchi, designer of Treasure’s Radiant Silvergun, revealed that Image Fight was an influence on his title’s development, which can be seen in the types of weapons it uses.

Image Fight was ported many times. The first was for the NES, developed by Irem themselves, which is also the only version released in North America. Unfortunately it’s quite a poor effort. It was released in 1990, but the sound and visuals are barely any better than something like Zanac, which which released four years prior, and in many ways is worse. The sprites are incredibly small and lose all of the detail from the arcade game. The stages lose a lot of detail – in the later levels that take place in space, there’s not even a starry background, you just fly over blackness. Half of the weapons are gone too. The upside is that there are less sprites on the screen so it’s much easier – the penalty zone here is a joke – but it’s so compromised to the point where it’s not worth playing. 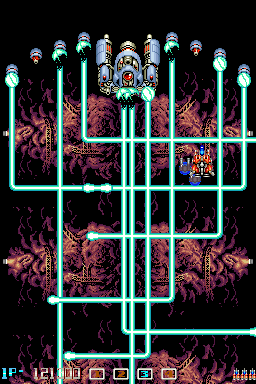 Faring much better is the PC Engine port, released in the same year. The graphics are similar to the arcade, though much darker. However, when reorienting from a vertical arcade monitor for a horizontal TV screen, the playing field is cut down by more than 50%. The sprites are still the same as the arcade game, though, making the playing field feel cramped. The music and sound has also been poorly converted. There are multiple difficulty levels though, plus the rapid fire afforded on the PCE controller is welcome. There’s also a secret option to play as Mr. Heli, from the Irem game of the same title.

Image Fight was ported to the FM Towns and X68000 home computers, by Ving and Irem respectively. Like the PCE version, they both suffer from the same cramped playing field. The FM Towns version features wobble scrolling, which scrolls the view up and down as you move forward and backward, which feels really strange. Otherwise, these are visually identical to the arcade game. The FM Towns version also offers a stereoscopic 3D mode, and both have difficulty adjustments and rapid fire options. The FM Towns version uses CD audio that uses recording of the arcade game soundtrack, while the X68000 version has music retuned to the computer’s FM chip. It’s very close to the arcade, though not identical.

The game was also released in compilation with X-Multiply for the PS1 and Saturn as part of the Arcade Gears series by Xing. While largely accurate to the arcade version (including streamed CD audio music from the arcade version), it suffers substantial display issues when playing on a horizontal TV. The screen is vertically squashed into order to fit the entire playing field on the screen, and it looks atrocious, with distorted sprites and significant tearing when the screen scrolls. The Saturn version is pillarboxed while the PS1 version is full screen, with even chunkier visuals due to the lower resolution. However, it also offers a tate mode, so you can turn your TV sideways for an aspect ratio similar to the arcade. It does cut off a tiny part of the side of the screen (noticeable on the status bar). The Saturn version doesn’t support the full vertical resolution of the arcade and PS1 versions, but the difference is only 32 pixels. There’s also an “extra” control option that turns both the screen and controls sideways, effectively allowing you to play the game as a (slightly awkward) horizontal shooter. Altogether, these are the best ports, as long as you’re playing in tate mode. 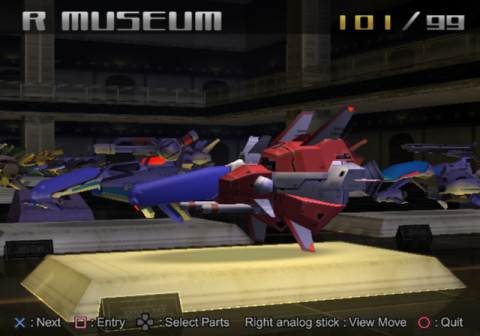 As with most ships from assorted Irem shooters, the OF-1 Daedalus reappears in R-Type Final as a playable ship. 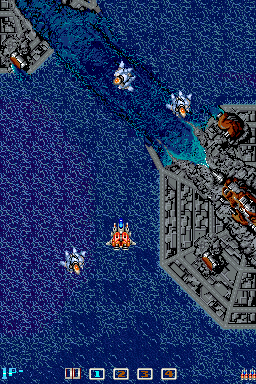 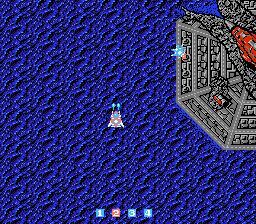 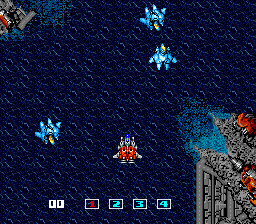 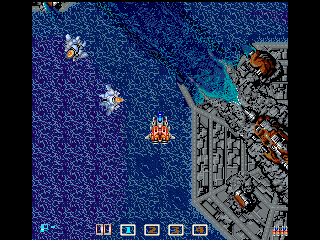 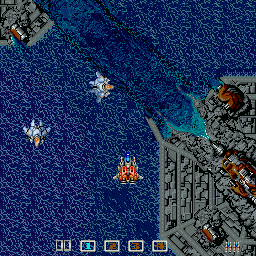 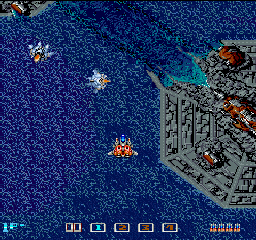 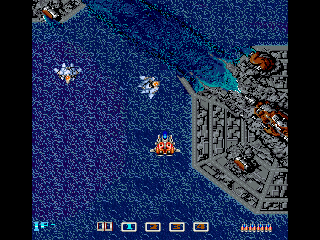 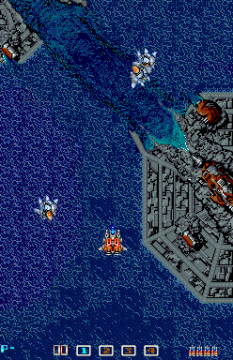 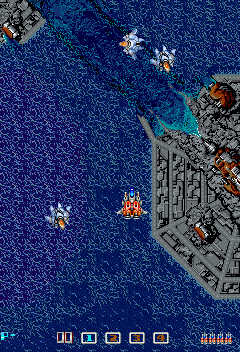