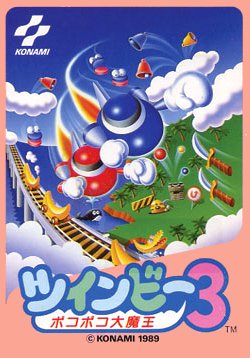 TwinBee 3: Poko Poko Daimaou (“Demon King Poko Poko”) is quite an improvement compared to the previous two games. The side-scrolling levels of Stinger are gone. It looks nicer and the game runs faster, though the animation for the enemies feels weirdly choppy. 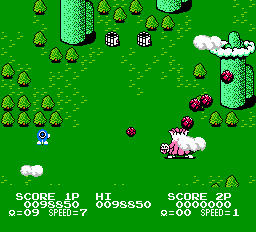 Getting power-ups from bells is now somewhat easier. The color cycling is now pseudo-random, so while speed-ups are more common, you don’t need to shoot a bell nearly as much to get something good, and sometimes they’ll keep their color if you hit them too many times. The weaponry is mostly the same as Stinger, though some of the multidirectional shots have been removed. A new ground-based icon is the matchstick, which will cause the next bell to be lit on fire. Grab this and your ship will be set ablaze, granting temporary invulnerability.

In the all-new option menu you can choose to play as either TwinBee or WinBee, instead of just forcing them on player one or two, and set the number of extra lives. You can also choose the order of the first four stages. There are only five areas in total: Air Island, filled with gigantic crystals and musical instruments; Wanana Bani, a tropical level; Castle Land, passed off a medieval castle; Dungeon, a coal mine; and the Final Stage, filled with checkerboards, playing cards and other magician-themed items. The game is clearly geared more towards novices, as you can choose up to nine lives. In previous games, an ambulance would only appear once per life, but now they’ll come every time you lose your arms.  There’s also a “jigoku” (hell) difficulty level for veterans looking for more of a challenge. 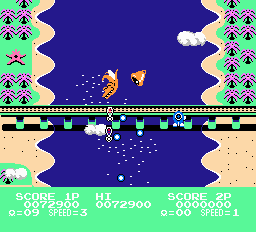 The backgrounds are more colorful and lively, and the level designs are more varied and complex.  Some levels have railroad tracks, which enemies ride on. The levels are filled with weird and amusing enemies, like the banana trains, or turtles with erupting volcanoes on their backs.

Before the later TwinBee games started introducing a variety of fanciful mechanized bosses, TwinBee 3 has some of the craziest creations Konami has ever devised, getting even weirder than the ones in Stinger. One is a ukulele band who bounces back and forth, attacking with musical notes. Kill them and their ghosts slowly scroll off the screen, although the lead singer is so attached to the mortal coil that she’ll stick around a little bit longer. The angry dragon with cavities seems right out of an ’80s toothpaste commercial. It’s hard to explain what the hell King Poko Poko is, appearing as some kind of gigantic tree-thing with a pulley on its side. 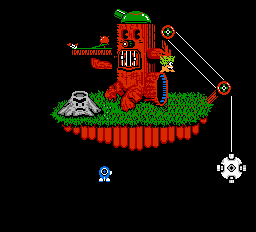 The sound quality has also drastically improved, particularly thanks to the PCM steel drum samples, which add considerably to the upbeat atmosphere. The regular theme music stays constant throughout the whole game, but each level has a unique power-up theme, and each boss has their own track as well. The levels are also introduced with a goofy digitized voice.

However, the three-player feature has been removed. The story justification is that GwinBee has been abducted. Also annoying is the bar at the bottom of the screen that keeps a record of your score, lives, and speed-ups, which reduces the playing field.

Overall, TwinBee 3 feels far richer than its predecessor, but this comes at the expense of the game’s length. With only five short levels, the game’s over and done with far too quickly. The only port of the game was to mobile phones, having been omitted from the PSP collection like Stinger was.