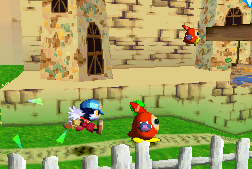 With the dawning of the 32/64-bit age, Super Mario 64 practically dictated that all games using polygons had to be 3D. There were a few games here and there that bucked the trend, like Pandemonium and Spider: The Video Game. These titles used 3D landscapes but maintained the classic 2D gameplay of the previous eras, a perspective that was dubbed “2.5D”. Due to the unfortunate fact that both of these games kind of sucked, this radical concept didn’t exactly set the gaming world on fire. Plus, while they represented a huge graphical leap forward compared to the 16-bit systems, the primary appeal of 3D games was that you could go in any direction – 2.5D was still confined to walking left or right. 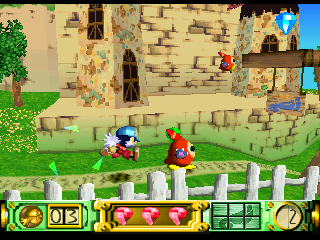 Enter Klonoa. It’s hard to tell exactly what the the hell Klonoa is. One guesses he’s some kind of anthromorphic cat thing with gigantic floppy ears that would make any rabbit jealous. But he’s a happy little bastard, and he’s happy for a reason – he’s one of the first games that actually pulled off the 2.5D act well. As a mascot, he’s a little late to the furry party started by Sega back in 1992 with Sonic the Hedgehog. But while he found some modicum of popularity in his native Japan, the rest of the world seemingly glazed him other. Maybe this is due to the old school nature of the gameplay, when other smiling mascots like Crash and Spyro offered true 3D. Maybe it’s because Namco of America just doesn’t know how to market games properly.

Or maybe it’s also because Klonoa is, perhaps, a little too cute for his own good. His early designs have him wearing a blue hat with an amusing Pac-Man stationed on top – later, he wears it to the side with a tuft of his black hair (fur?) sticking out. But the average kid on the playground doesn’t want anything too cutesy, lest they feel like a wuss. Klonoa just isn’t edgy enough – he’s far too wide-eyed to have any of that “attitude” that’s a necessity when targeting a younger market. This is all a shame, of course, because the actual games he stars are fantastic – they’re at least the quality of the early Sonic games, before they all went downhill at the end of the Dreamcast era. 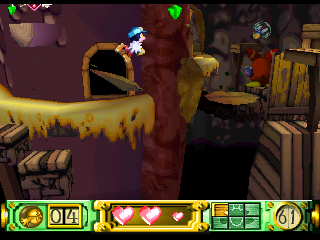 The gameplay in the Klonoa games is roughly derivative of Super Mario Bros. 2. Klonoa has a magic ring that inflates bad guys (much like the dude from Dig Dug), which he can then carry over his head like a balloon. You can toss one foe at another to kill them, but you can also leap and spring on top of their heads, allowing you double jump. It seems simple at first, but leads to some interesting puzzles.

These brainteasers usually seem kinda simplistic – let’s say that you have a ledge that’s out of Klonoa’s reach, but the only enemy around is way on the other side of the area. How can you figure out a way to capture the enemy and bring it back to the tall ledge? You can’t double jump or throw it, because then you’d lose the enemy. You can’t take it through narrow passages, because it won’t fit. They can also require some tight reflexes, to properly leap, grab another enemy, then leap again before you fall. Although these certainly aren’t Legend of Zelda-caliber puzzles, they’re require a bit more thought than you would usually find in a platforming game. They’re also pretty forgiving – since enemies respawn infinitely, you can just head back to retrieve another one if you screw up. 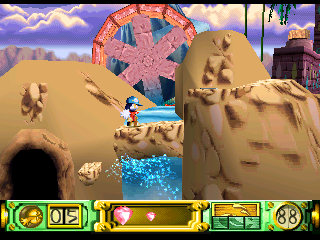 In order to give the games an otherworldly feel, Namco created a whole new language called “Phantomile” that everyone in the Klonoa games speaks. There’s even a whole vocal song in Klonoa 2 featuring this cutesy gibberish. Some titles (like Klonoa Heroes and Namco × Capcom, as well as the Wii remake of Klonoa) ditch this idea and have the characters speak in an understandable language anyway, but it’s a unique concept. The voices themselves are pretty decent, if a bit grating – Klonoa’s victory cheer of “Wa-hoo!” will certainly stick with you, whether you want it to or not.

There have only been two proper Klonoa games for the consoles – the rest are all sprite-based scrollers for portable systems. Considering the gameplay, these actually all work out pretty well. In Japan, the series as known as Kaze no Klonoa, or “Klonoa of the Wind”. This moniker has been dropped from all of the American releases.

One of the most common enemies you’ll find in Klonoa is the Moo. Easily as ubiquitous as Goombas or Shyguys, Moos are large, fluffy balls with large ears and blank round eyes. They never lose their vacant smile, even as they’ve been inflated by Klonoa and tossed across the screen into a wall. They come in all kinds of shapes, varieties, and sizes – you almost feel a little bad about murdering them just so you can jump a little higher. 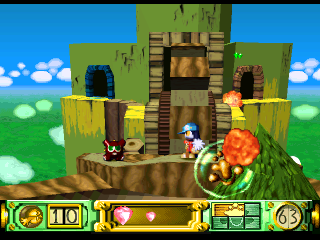 Klonoa’s first adventure begins when he witnesses a meteor falling from the sky. Upon checking the crash site, Klonoa discovers a ring in the wreckage. This ring, naturally, has super powers, and is the home of floating ball of light called Huepow. The villain is a rather evil bastard named Ghadius, who’s often accompanied by his foolish-but-still-nefarious sidekick Joka. There are numerous cutscenes throughout the game, sometimes in the middle of the stage, but they can be easily skipped.

In the original PlayStation release, the characters are sprites, so they tend to pixellate rather nastily as the camera zooms in and out. These look especially awful in the cutscenes, but their subpar quality is completely overshadowed by the gorgeous polygonal backgrounds. The fact that the PlayStation can pull this off at such a consistently smooth frame rate – without all of the usual texture blockiness that 3D games suffer – is a testament of brilliance to Namco’s graphics programmers. Though most of the action takes place on a 2D plane, you’ll occasionally need to throw enemies into the background or foreground to hit switches or obtain other items. Most of the boss fights take place on a circular track, with the enemy in the middle. Like many classic Nintendo games, you can’t directly attack them, but instead need to find some way to use the smaller enemies on screen to toss back at them. 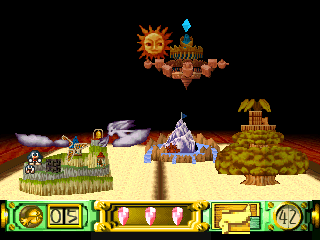 The game is fairly easy and short, with only twelve stages (called “Visions”) before the final confrontation, but, like Yoshi’s Island, the real challenge comes with rescuing all the prisoners in each stage. There are six in each level, and usually aren’t too hard to find, but occasionally require a bit of extra effort to find. The prisoners you save will affect the music on the world map screen – rescue a few, and it’ll be missing instruments, but rescue all of them, and you’ll have a full symphonic melody. Rescuing all of the prisoners in and all of the stages, and you’ll open up a super hard hidden level. 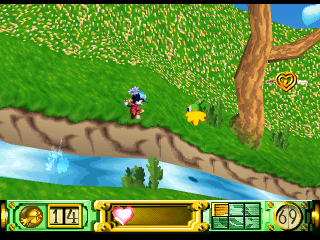 With its calming new age music and lush, nature-based locales – crystalline caves, glowing castles, beautiful waterfalls and wooden villages in the trees – it’s hard not to love Klonoa. Despite its relative simplicity and perhaps overt cuteness, Klonoa still manages to spin a surprisingly dark (and even emotional, as evidenced by the somewhat bittersweet ending) tale that is absolutely essential to experience.

Since Klonoa was mostly ignored when it was released, the game carries a higher price tag than your average used PlayStation game. To celebrate Namco’s 50th anniversary in Japan, they released the NamCollection for the PS2, which included five old PlayStation games. Amongst titles like Mr. Driller, Air Combat 2, Tekken and Ridge Racer, Klonoa is definitely the best game on disc. Unfortunately, there aren’t any enhancements to speak of – the only bonus is a small art gallery. 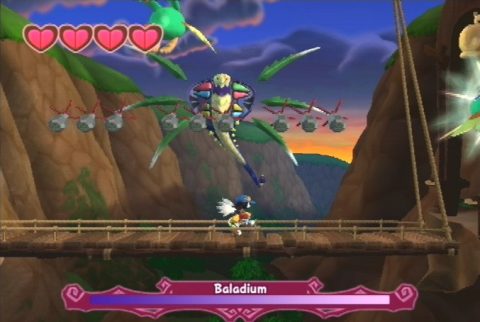 In 2008, Namco remade Klonoa for the Wii, updating the graphics to use a similar engine to Klonoa 2, although it doesn’t use cel shading. It still manages to look completely fantastic though. The game itself is pretty much the same – it can be played just like the original PlayStation version using the Classic Controller, although there’s a nearly useless spin maneuver if you play with the Wii remote – though it gives you the option to change the voices to an actual spoken language as opposed to the made-up gibberish language. There are also a few unlockable costumes, and the ability to play “flipped” versions of the levels. Hidden within these flipped levels is the ability to find another whole new, rather difficult stage. They actually made the game easier, though, by giving you six hearts instead of three. Even though the PlayStation game is still damned good, the Wii remake is probably the way to go. 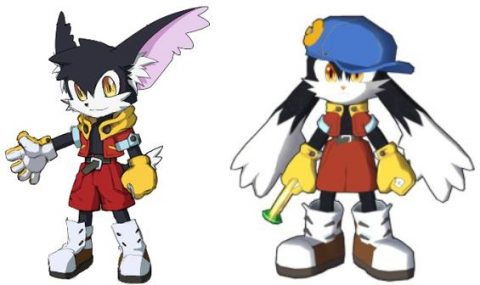 Before Klonoa‘s Japanese release, Namco polled English speakers regarding a drastic, edgy redesign of the hero. Thankfully, a vast majority of voters went with the old classic design over the hip and edgy abomination. 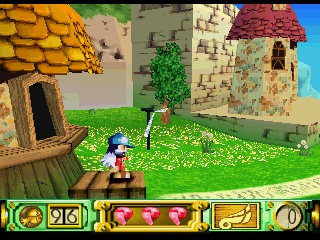 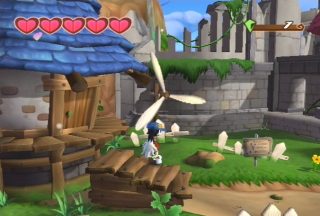 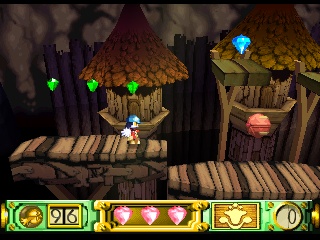 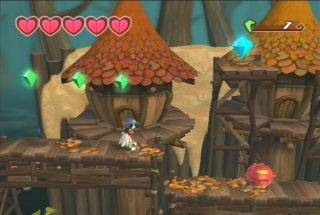 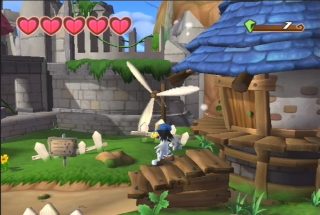