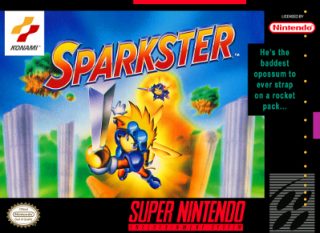 The SNES Sparkster title plays almost exactly the same as its Genesis predecessor, but tweaks various elements enough to feel like a different game. This title was directed by Hideo Ueda, who also worked on the X68000 version of Akumajou Dracula (Castlevania), as well as Axelay.

This time the little rodent is fighting against evil wolves, but otherwise the concept is much the same. Sparkster has a new move in which he flings himself forward in short bursts by pressing the L or R button. Rocket Knight Adventures was a little restrictive in its level designs, while Sparkster has more open stages, with larger vertical spaces that allow you to play around with the jetpack much more than its predecessor. In some ways it feels similar to TwinBee Rainbow Bell Adventure, released for the Super Famicom earlier in 1994, though that game had shorter stages and was much easier. 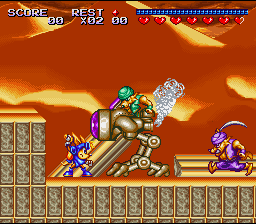 The levels themselves are more creative as well – there’s an Egyptian-themed level, a stage based around musical instruments, with gigantic pianos and trumpets that spew you into different parts of the level, and another has you jumping from mechanical birds. At the same time, they’re longer and a bit less involving – while there are still some mini-bosses here and there, the situation rush aspect is mostly gone. The levels are also filled with jewels which, in traditional platformer fashion, will award you an extra life when you grab 100 of them. The side-scrolling shooter sequences have been replaced with a single overhead shooter stage, which works a bit better than the original Rocket Knight Adventures.

Sparkster definitely benefits from the graphical prowess of the SNES – Sparkster’s sprite looks much cooler than before, and the background graphics are full of brilliantly vibrant colors, even if they don’t rely on any gimmicky effects. The music is fantastic too, as the game gets a brand new “theme” song, variations of which are played at various spots throughout. There’s some annoying slowdown, but you still zoom with near-unfathomable speed, negating any of those silly Sega “blast processing” ads. 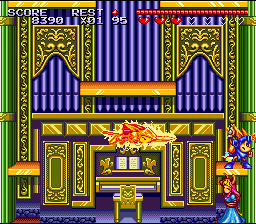 Though the game is only seven levels long, the easier difficulty settings cut out some of the stages, and the password feature makes the adventure a bit more manageable than the Genesis original. It’s quite an adorable password system, too – a series of branches suspended over some boxes, which Sparkster needs to hit to cycle through various symbols. Playing on the Very Hard difficulty setting is also the only way to get to the true final boss.

Like Rocket Knight Adventures that preceded it, the SNES Sparkster is a completely fantastic game, and undoubtedly an overlooked classic.