Months after the release of the original Front Mission, a new entry developed by Omiya Soft was made available to the public. Front Mission: Gun Hazard is a side-scrolling shooter spin-off that was released in 1996 for the Super Famicom. Set in 2064, it takes place during a time of violent revolutions and revolves around an orbital elevator known as “Atlas.” Despite what some would think, Front Mission: Gun Hazard is actually not a canon entry in the series timeline.

The main protagonist, Albert is a sergeant for the Bergen Army. He takes part in the effort to suppress a violent revolution in the country led by a Bergen Army colonel.

A Colonel for the Bergen Army, Ark is the de facto leader of a coup d’etat in the country. His goal is to take over Bergen and assassinate President Orwen.

Brenda is a mercenary who works for the coup d’etat forces in Bergen. She is assigned to find and capture the president of the country. 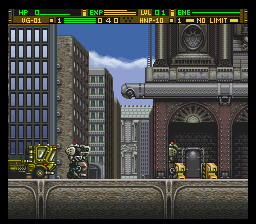 Front Mission: Gun Hazard‘s presentation takes inspiration from Assault Suits Valken in its futuristic design and setting. Yoshitaka Amano returns to provide art direction and as with the original Front Mission, players can spot similarities between this game’s characters and ones from the earlier Final Fantasy games. Amano aside, the rest of the visual presentation is good. Detailed backgrounds give a good sense of scale, the wanzer animations are nice, and the special effects keep the battles from being boring. The aural side of things is the star of the show, featuring a team effort from composers such as Nobuo Uematsu (Final Fantasy), Yasunori Mitsuda (Chrono), Masashi Hamauzu (SaGa), and Junya Nakano (Threads of Fate). The musical score while lacking real standout pieces, is powerful, engaging, and is very consistent quality-wise. The sound effects aren’t nearly as good, but they get the job done.

As a side-scrolling shooter, Front Mission: Gun Hazard plays out like Assault Suits Valken. The comparison is fair as Toshiro Tsuchida and his colleagues created that game. Players control the action in real-time through their wanzers, which can do a lot of actions from jumping to shooting. On-foot action is also an option for players daring to fight outside their wanzer. Front Mission: Gun Hazard progresses through the use of a world map, in which the player travels from location to location. Missions can also be done with an ally unit controlled by the AI if the player needs help. By defeating enemy units, the player gains experience points and money. The experience points are used to strengthen the wanzer, whereas the money is used to buy new parts and weapons. Although not as in-depth as the original Front Mission, the customization aspect is a huge part of this game. 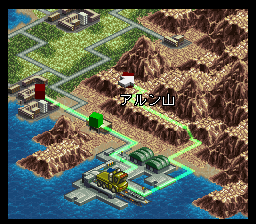 Although it’s inspired by Assault Suits Valken, Front Mission: Gun Hazard doesn’t quite play as smoothly. Whether it was intentional or not, the wanzers move rather slowly. It walks and jumps slowly and unless you use its boosters, don’t expect the game to play out in a fast-paced manner as the game it’s inspired by. The level design is also rather lackluster even though there are a lot of them to go through. It’s fun to customize the wanzers and play around with them for sure. However, with the lack of any mini-games or other game modes, Front Mission: Gun Hazard focuses strictly on the missions. The story is interesting enough that the game is worth a shot, but replay value suffers due to the lack of things to do outside of missions.

Front Mission: Gun Hazard was released in Japan only. Fortunately, a group of series fans worked on an unofficial English localization and finished in 2004. Thus, the game can be played in the English language.