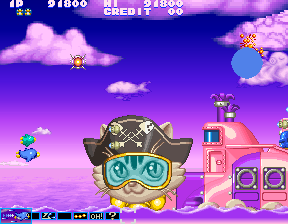 Gokujou Parodius: Kako no Eikou wo Motomete (translating roughly to “Fantastic Parodius: Seeking the Former Glory”) is a pretty direct sequel, running on the more powerful Konami GX system for better graphics. The characters were designed by Shuzilow.HA, who also worked on many of the TwinBee titles. 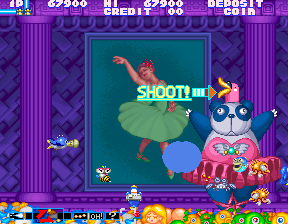 All four main characters return, along with four completely new ones: Koitsu, Michael, Hikaru and Mambo. Some of these characters also forego Options, so instead you can power up their weapon and strengthen it for massive amounts of destruction. There’s also two-player simultaneous play. Although friendly shots don’t hurt the other player, if you attack them enough, eventually they’ll rage for a short time and fire off extra bullets.

Overall, it’s a shorter game than the original, with only seven stages compared to ten. But the levels themselves are more interesting, featuring a jaunt through a crane game; an underwater battle against that cat battleship; a speed up zone reimagined as a construction site, featuring falling rocks, deer, and exclamation points; and a trip through a dance club. 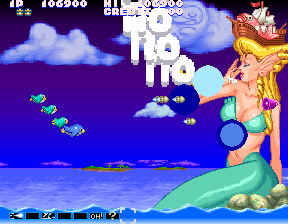 There’s also an outer space level that references a number of classics shooters. Most of the foes are tiny versions of bosses from Gradius II, and they swarm like enemies from Galaga. It also features those nearly invincible flipping tiles from Xevious, The moon level includes rabbits, a reference to the Japanese belief that a rabbit pounding a rice cake can be seen on the lunar surface. Further, the funniest part of the dance club isn’t even the gigantic array of screens that show a penguin in heavy metal garb, totally rocking out (though that’s pretty funny too), but the line of penguins holding their bladders, desperately waiting to get into the bathroom.

The bosses are a fine bunch of weirdos too, including a ballerina panda, a gigantic mermaid, and the penultimate foe, an octopus dressed as Indian royalty. After being killed, one of the enemies is also revealed to be a mere cardboard cutout, with voices supplied by two penguins with a microphone and a boom box. 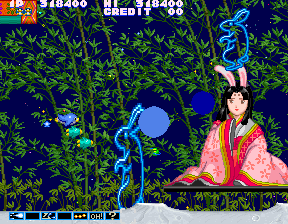 There are also two bonus levels. One is an assault against a gigantic Moai battleship, and is only reachable if your score ends with certain digits after completing each stage. The other is played after the ending credits, features a medley of music from other Konami games called “Shooting History”, and features a battle against a robotic penguin named Pentarou X.

The music’s even better this time too, with higher quality sound and more manic energy. The techno remix of Dvořák’s “New World Symphony” is hilarious, and the outer space zone level tune is a humongous mishmash of “Yankee Doodle”, “Ej Lucka, Lucka” (a Czech folk song), “Mary Had a Little Lamb”,”Der Flohwalzer”, “London Bridge”, and “Picnic”. 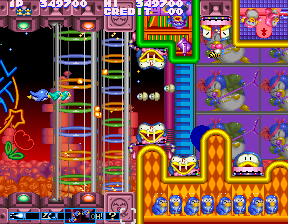 It’s also got a weirdly dark ending. The goal is to find some massive treasure in order to claim your former glory, but once you find it, you’re instead greeted with a bomb, which apologizes and blows you to smithereens.

The Super Famicom version is an excellent translation from the arcade game. The graphics aren’t perfect but it still looks fantastic, and the music is decent, too. Unfortunately the two-player simultaneous mode has been removed, and there’s some extra slowdown. Some of the weaponry on the characters has also been changed, particularly on Hikaru and Akane. However, it adds three extra characters: Goemon the Mystical Ninja (last seen in the MSX game), Kid Dracula, and Upa from Bio Miracle Bokutte Upa.

The 32-bit Deluxe Pack version of Gokujou Parodius is based on the arcade version and is nearly a perfect port, with the exception of some loading times, slowdown, and graphical glitches when the action gets too heavy. There are also a few vocal songs in the option menu. 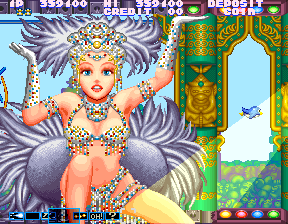 While the PlayStation version has vertical bars on the left and right side of the screen, due to the arcade game running at slightly lower resolution (288 horizontal pixels instead of 320), the Saturn version has an option to extend the screen to the full length. The Saturn version was also released in Europe, which features the extremely rare English version of the game Fantastic Journey.

The PSP version is also based on the arcade release, and features the screen extension option. However, for licensing reasons, the first level theme music has been changed. In the initial releases, it’s “In the Mood”, the classic big band tune by Joe Garland, but has been replaced by a rendition of “Turkey in the Straw”. The third level boss theme was originally “Mambo No. 5” by Damaso Perez Prado but has been changed to “Parade of the Wooden Soldiers” by Leon Jessel. 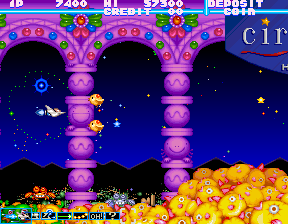 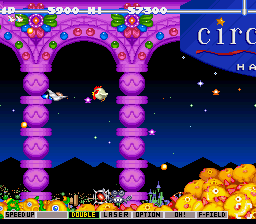