Moero TwinBee: Cinnamon Hakushi wo Sukue! (“Burn, TwinBee: Rescue Dr. Cinnamon!”) – was originally released on the Famicom Disk System. It’s remembered mainly for two reasons: discounting later rereleases, it’s the only TwinBee game that ever reached the US (where it was renamed Stinger), and it’s another one of those NES sequels that deviates from the original. As with many other second installments in video game franchises (Super Mario Bros. 2, Zelda II, Castlevania II), Stinger is quite different from the original TwinBee, as it’s the only game in the series that switches between horizontal and vertical scrolling stages. 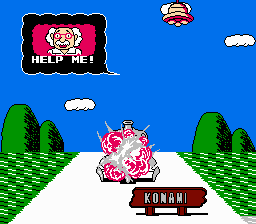 It’s especially bizarre because the mechanics aren’t consistent amongst the levels. The overhead stages play and look pretty much like the original Twinbee, with a very slight graphical upgrade. On the other hand, the side-scrolling levels have some weird changes. The sprite for the ships don’t even look the same, as they’re missing arms and have visible jets on the back. Perhaps because of this, you can’t lose your arms anymore, and instead are killed in a single hit.

Additionally, no matter what the perspective, the bells always drop towards the bottom of the screen. In the overhead stages, this works just as in the original TwinBee. In the side-scrolling stages, however, it makes it even more difficult to juggle the bells. It would’ve made more sense if the bells drifted left, towards the player, which is what Konami ended up doing when they implemented the bell power-up system in the Parodius games. In the horizontal levels, the B button shoots both the regular weapon and the bombs at the same time, while the A button fires little hearts directly up in the air. These don’t hurt enemies, but are instead used to juggle bells. Overall it feels like these segments were designed separately then pasted together at the last minute. It’s also unfortunate that the game begins with a side-scrolling level, since it gives a bad first impression. 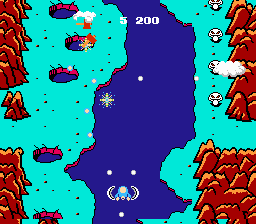 Despite numerous oddities like this, there are a handful of welcome improvements over the original game. When getting killed, the fallen ship will turn into an angel and drift towards the top of the screen. If you can grab this before it leaves, it restores all of the power-ups you had when you died, so you’re not left underpowered. It’s not as useful as it sounds though, considering you typically need to stay at the top of the screen to juggle bells, making it impossible for the next life to grab the angel before it drifts off. In general, though, it’s a bit easier than the original game, especially considering you can continue after losing all of your lives, though you need to restart the level.

There are a few new weapons like the laser, obtained in the form of a pink bell. In TwinBee, the three-way weapon was only available by grabbing items found on the ground. There are a few extra multi-directional weapons that are found in a similar manner. More hidden items can be found, including an icon of Goemon’s head (from Ganbare Goemon / Mystical Ninja) for points. Finding Professor Cinnamon’s head will take you to a bonus level after defeating the boss. 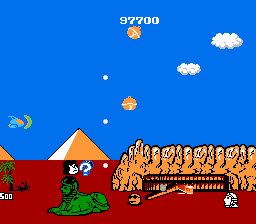 There are seven levels, with more visual distinction than the areas in TwinBee. One level seems to take place underwater, while another is above a land resembling Egypt. The bosses are much, much weirder, including a boom box and a water spigot.

The music works the same way as the original, with a “regular” slow paced song and then a higher tempo one when you get powered-up. And again, both songs are catchy, but repetitive. At least it changes up in the final level, which has a different song. 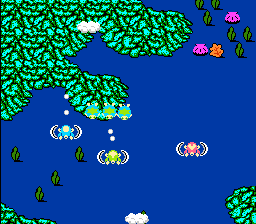 It could be unfair to compare Moero TwinBee to its US counterpart as its most interesting feature was taken out from Stinger. The Japanese version supports three players simultaneously, which is quite a rarity for a 1986 Famicom game. This was made possible since the Famicom has two built in controllers and an expansion port for the third. In addition to TwinBee and WinBee, a new ship, the green-colored GwinBee, was introduced. Since the NES lacked the hardware at the time to accomplish this, the three-player mode was reduced to two players. WinBee was cut out of the game entirely, despite appearing the cover of the American version, which uses identical artwork to the Japanese version. The Japanese disk version also offers two difficulty selections: normal or hard. This option is gone from the American version, but instead the first loop is played on the normal setting, then changes to hard for the second loop. 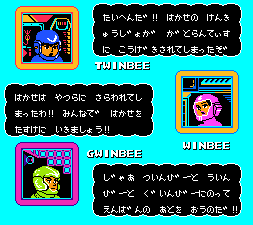 There’s a brief introduction sequence in both versions showing Dr. Cinnamon being kidnapped. In the Japanese version, the sign outside his laboratory reads “Donburi”, written in English, the name of the island where the TwinBee cast lives. This was changed to “Konami” in the English release. The Japanese version also has an extra screen where the three pilots talk to each other.

In the Japanese release, the story takes place 100 years after the original TwinBee, with the heroes fighting off the evil Gattlantis, the descendant of King Spice from the original game. Dr. Cinnamon is still around because he was placed in cryogenic sleep. The American version’s manual uses a slightly different take on the Japanese story, involving aliens from the far-away planet of Attackon, who kidnap the professor in order to steal his sweetener formula and turn the Earth into cotton candy. It also grants the first name Einstein to Professor Cinnamon.

In 1993, Konami released the game in again in cartridge format, just like it had with Akumajou Dracula (Castlevania) and Bio Miracle Bokutte Upa. It’s mostly identical to the original release, with an added easy mode. Additionally, in the instruction manual of Detana TwinBee Yahho! Deluxe Pack, the pilots of the three ships are identified as Dr. Cinnamon’s great grandchildren: Squash, Whip, and Mellow. They were originally nameless in the actual game.