Sparkster was Konami’s entry into the overcrowded “xtreme rodent” market. He’s an opossum, but you can barely tell since he’s clad in a thick suit of armor. He has a rocket pack and a sword that can shoot flames, and a typical 90s smirk on the cover. 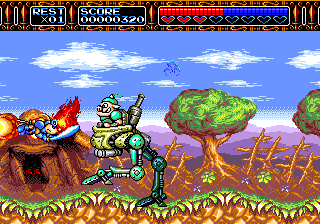 Except he never quite caught on, which is extraordinarily sad. It’s easy to be cynical, considering he’s crafted from the same “focus test- approved” mold as Awesome Possum, this game was made by Konami – the same Konami that pumped out some of the best 8 and 16-bit games ever made. Sparkster’s original games were directed by Nobuya Nakazato, the man who directed Contra III and nearly every Japanese-developed Contra thereafter. From the minute you start Rocket Knight Adventures, you know this is vintage Konami: clever graphical tricks, outstanding level designs, and bosses that refuse to die.

Much like Sonic, Rocket Knight Adventures puts a heavy focus on blazing fast speed. Charge up your rockets and you’ll hurtle forward, sword thrust outward and skewering everything in your path. Sparkster also deflects off of walls and ceilings, allowing you to ricochet through tight hallways or scale towers. In addition, he can also spin in place, becoming temporarily invulnerable to enemies while slicing them to bits. As mentioned, he wields a sword, which will send out short range bursts of fire, but can also be used in close quarters to gain extra hits.

When Konami first started making games for the Genesis, nearly all of its titles were watered down ports of SNES games (Sunset Riders, Teenage Mutant Ninja Turtles: The Hyperstone Heist) or new installments in established franchises. Rocket Knight Adventures was the first property exclusive to Sega’s system, and it was a remarkable debut. You guide Sparkster through seven stages to not only rescue the princess, but save the kingdom from an army of evil pigs. The battle takes place through the fields and in the castles of the rodent kingdom, until you reaches the pig capital, a bleak series of mechanical castles with a heavy steampunk influence. After this point, you rocket into space to fight the final battles with a series of robots on a satellite orbiting the globe. In addition to the legions of swine, Sparkster also must face his arch-nemesis Axle Gear, who wears the same armor as him and is encountered several times through the game.

Unlike most animal mascot games, Rocket Knight Adventures is much more of an action game than a straight up platformer. The levels are divided up into “situation rushes”, a variation of the “boss rush” term invented by Gradius. Each level is broken down into three or four substages – these parts are only a few minutes long each, but all put you in different scenarios. While it never strays from its core mechanics the way the Earthworm Jim games do, it provides a number of brilliant ways to not only keep the action fresh, but also shows off some fairly impressive visual and design tricks. Because of this, Rocket Knight Adventures feels much more in line with an arcade-style Contra, rather than following the ethos of typical console platformers like all of Sonic’s other clones.

One part of a stage takes place against a waterfall, with certain platforms delivering you between the foreground and background, similar to the first stage of Super Castlevania IV. In another area, there’s a pool of lava which rises and flows periodically, showing Sparkster’s reflection. The foreground blocks the upper section of the stage from view, so you need to use this reflection to navigate these platforms. 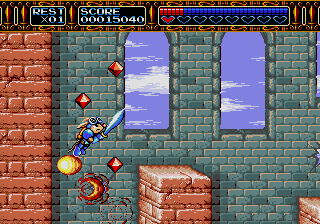 There are a few shoot-em-up segments, which feature plenty of references to Gradius, and a particularly amusing fight in gigantic Rock ‘Em Sock ‘Em-style robots. While novel, these are actually the weaker points of the game, as you’re too weak in the shooter segments and the gigantic robots are difficult to control. Still, Konami had some of the best graphics programmers back in the 16-bit era, and they really put the Genesis to task, with reflections, multi-segmented bosses, and other crazy effects – only Treasure games like Gunstar Heroes prove themselves better.

The music is fantastic, too. The soundtrack, supplied by a number of Konami composers including Castlevania mainstay Michiru Yamane, weaves a theme song that sounds about as close to an orchestra as the Genesis FM chip can get. There are also a number of foreboding electronica themes used for the later stages, as well as the boss fights. 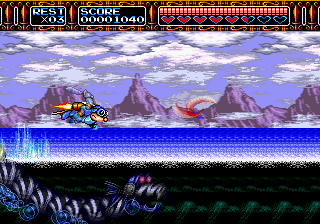 If there’s any major issue with Rocket Knight Adventures, it’s that you only occasionally get to take advantage of Sparkster’s rocket powers. They’re absolutely vital when fighting bosses, since you need to properly time your blasts to strike at weak points and find a way to ricochet back to safety. But most of the stages are fairly narrow, and flying around haphazardly will get you killed. That being said, it’s remarkably fun to toss yourself into the air, off the screen, and watch as Sparkster drops to the ground seconds later, his arms flailing wildly. Konami definitely got the “attitude” part of his character down with his charismatic animations. He’s much friendlier than, say, Sonic, as if you leave him idle, he’ll smile at the player and give a thumbs up.

Despite the kiddie demeanor, Rocket Knight Adventures is in no way easy. While the “Child” difficulty is manageable up until the final stages, the other difficulty levels greatly reduce the number of lives and continues, posing quite a challenge to even the most diehard gaming vets. The North American version is ridiculously difficult. The “Easy” mode offers two lives and three credits, “Normal” offers one life and one credit, while “Hard” offers one life and no credits. The Japanese version is much more forgiving in this regard, as “Normal” mode offers three lives and five credits, while “Hard” mode offers two lives and three credits, making it equivalent to the American “Easy” mode. Like many Konami games, you need to play on Hard mode to get the best ending. 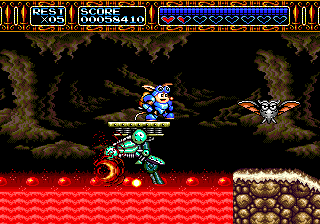 The Japanese and American/European versions of Rocket Knight Adventures have completely different intros and stage introductions. The Japanese version begins with a group of pigs terrorizing opossum kids in a field as the shadow of the evil emperor hovers above. The stage intro screen shows a small, cute rodent orchestra playing music. The American/European version instead begins with a view of Sparkster, standing on a mountain and facing the screen. He unsheathes his sword and the camera pans around, showing the evil castle while the emperor’s shadow appears. The stage intro shows a picture of Sparkster against a starry background, which changes at the beginning of each new level.