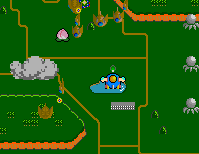 TwinBee is one of Konami’s most popular shooter series. There’s no doubt about the game’s immense popularity. However, those outside of Japan might not even know that the series exists.

At its core, TwinBee is a shoot-em-up, but that’s really just one part of it. It started as a shooting game, but in the middle of its life, the series became mostly centered on its characters, and they (or, maybe closer to truth, their voice actors) became so popular that they spawned an anime, CD dramas, idols, and other manifestations of Japanese pop culture. 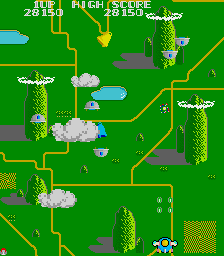 In 1984, Namco’s Xevious, the first vertical scrolling shooter, was one of the most popular games in Japan. Many other companies tried their hand at similar games, including Capcom’s Exed Exes and SNK’s Hal 21. While Konami had worked on other vertical shooters, TwinBee is undoubtedly their most popular take on this style of game.

Rather than mimic the sci-fi aesthetic of all of the other games, TwinBee went for a more original route. Its main distinctive feature is the cute fantasy setting. The ships, TwinBee and WinBee, are cute little things, colored blue and pink with little arms on the side. Their goal is to defeat the invading army of the evil Lord Spice. Most of the enemies consist of flying fruit, knives, octopi, and other silly objects. Instead of turrets on the ground, there are pine cones. The major exception, at least in the first TwinBee, are the bosses, which are typical spaceships, although they’re usually colored more brightly than other shoot-em-ups. The invincible flipping tiles of Xevious have been changed to spinning spiked clubs.

Outside of the visuals, the core gameplay is very similar. As in Namco’s classic, the ship can fire forward with a button and drop bombs (using their tiny arms) on the ground with another. It works slightly differently, in that there’s no targeting cursor on screen, but instead your ship will automatically lock onto a ground target if you’re at the appropriate distance. 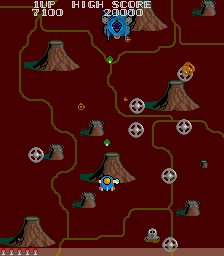 The other most innovative feature is its two-player mode. This is common nowadays, but it played a big role in its success at the time. Gradius and R-Type were both strictly single-player experiences, and most of its competition still relied on letting the two players take turns.

TwinBee and WinBee can also interact in several ways: they can unite by holding hands to shoot a powerful fire bullet. Perhaps more fun and effective, one ship can push the other to produce a spread bullet shot. This emphasis on teamwork was undoubtedly why the title of the game is TwinBee.

Also, instead of getting killed outright by enemy bullets, your TwinBees will lose their limbs, so they cannot drop bombs. (They can still shoot their main weapon, at least.) When they’re fully incapacitated, a little ambulance comes out from the screen, ready to resuscitate them, if you can catch it. However, taking a direct hit will still destroy the ship outright.

The other departure from Xevious is the power-up system. Whenever you shoot a cloud, a bell pops out of it. Regular yellow bells will add points to your score, and grabbing several yellow bells in succession will increase the bonus. However, if you shoot them, they’ll change colors and become useful power-ups. A blue bell is a speed up, the white bell powers up your weapon with a double shot, the red bell will create a shield and the green bell will add “bunshin” mirror Options that mimic your ship’s fire. You cannot equip the Options and the shield at the same time. 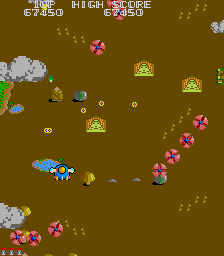 The bell power-up system is a “love it or hate it” issue, because it takes a lot of hits in order for the bells to color cycle into something useful. You only need to hit it five times to change to a white bell for a double shot, and a speed up takes ten, but it takes fifteen and twenty shots, respectively to get the Options and the barrier. If you shoot a colored bell, it changes back to yellow and continues on the cycle, so you need to be careful. They can also fall off the screen. So playing TwinBee is often like a juggling act – in addition to shooting enemies, you’re balancing bells, usually several at a time, trying to get the power-ups you want. Also, if you shoot a bell too many times, it’ll turn into a bee, which will kill you.

Further, destroyed ground targets yield different items. Most of the time you’ll just find fruit for a minor score bonus, but occasionally you’ll find a star which destroys all enemies on the screen (except for bosses), and a ground bell (candy in the home ports), which grants a three-way shot. If you already have a three-way shot, you can also find a “miracle ball”, which is a baseball that will fly around the screen and destroy things.

The boss encounters are a little bizarre. When you come to the end of a stage, the landscape abruptly shifts to a darker color palette, leaving a clear delineation between the bright style of the main stage and the darker hues of the boss fight. The scrolling doesn’t stop during these, so they essentially cut into the next level, though no additional enemies will attack. Once the boss is defeated, the landscape color palette changes back just as awkwardly and the game continues. There are technically five stages, and the game loops infinitely anyway, so there’s no real ending. 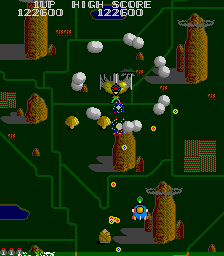 Like many arcade games of its time, TwinBee is no cakewalk.  The enemy patterns quickly become overwhelming, and bosses take too many hits to destroy without power-ups. Unlike Gradius, you resurrect immediately where you’re killed, leaving you in a weakened state that’s very difficult to overcome. Playing alone is difficult, as the game seems to be built for two players. There is no ability to continue when you run out of lives.

For most of the game, there are only two songs – the basic theme music, a calm, laid back little piece, and the power-up music, which is much more upbeat. It’s a little tiring to hear the same songs throughout the entire game, but they’re both pretty catchy.

The Famicom port isn’t so great. It loses the vertical screen ratio, and the graphics don’t translate too faithfully, with most of the background detail reduced to a single color. The bell color cycling has changed so the speed up comes before the twin shot, and the green bell for the Options has been turned into a flashing bell. You can now find extra lives from destroyed ground targets. The levels now stop scrolling and the screen properly darkens during boss fights, and then fades into a new level when they’re defeated, so it’s less awkward looking than the arcade game. The mirror Options are reduced from three to two, and they can no longer toss bombs either. 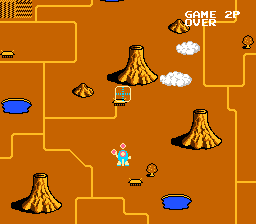 The MSX port is similar, but like many games on the system, it suffers from incredibly choppy scrolling. The sprites aren’t as detailed, either. The PSG music in the cartridge version is similar to the FC version. It’s also contained on the Konami Game Collection 3 disk release, which supports the SCC+ sound cartridge for superior music. The X68000 is one of the best ports of the era. It’s basically arcade perfect, with some redrawn and recolored graphics, and somewhat better music.

The Famicom version became part of the Famicom Mini series for Game Boy Advance, which is just an emulator playing the game in a squished resolution. A port of the arcade game was also included in the Konami Arcade Classics pack for the DS. You can turn it sideways for a vertical view closer to the arcade version, however, the DS resolution isn’t high enough, so the graphics will always look a little squished and distorted. It is, however, the first time the game was officially released in North America. It uses the name RainbowBell, which seems to imply that the game was originally meant to be released worldwide under that name, but never made it out to the public. 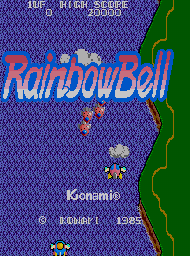 The PSP version, included in the TwinBee Portable collection, is also an arcade port done in a similar manner. The PSP has a higher resolution than the DS, so the screen can be represented accurately without any resizing. However, it’s missing two-player mode.

The Famicom version was also refurbished for the 3DS line of 3D Classics on the eShop. The graphics are slightly updated to include more detail, but the difference is barely noticeable. The 3D effects are rather underwhelming, too, and the game’s scale doesn’t sit well with the small screen. It’s presented in a 4:3 ratio, so the sides are pillarboxed with a red curtain. This version was released worldwide.

There are actually three different generations of TwinBee pilots, spanning the numerous games in the series. The 1985 arcade game features the faceless Annamon (for TwinBee) and Donnamon (WinBee), both sons of Dr. Cinnamon. The second (and most famous) generation of pilots, Light and Pascal, debut in Detana!! TwinBee. There’s even a third generation of heroes, Squash, Whip, & Mellow, who are the protagonists of Moero TwinBee and TwinBee 3. 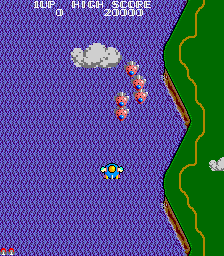 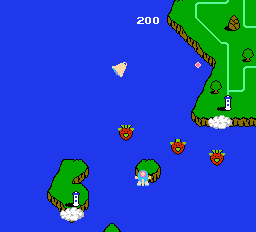 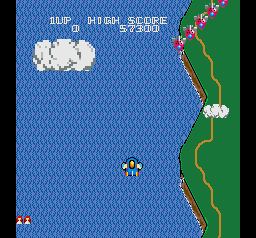 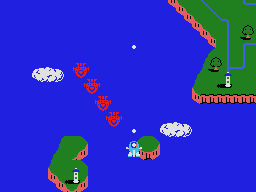 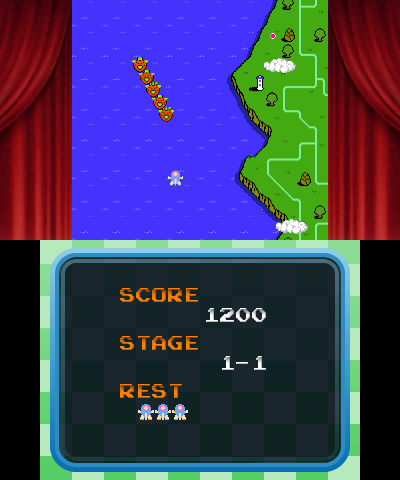