Rather than porting Detana!! TwinBee to the Super Famicom, Konami instead developed a sequel specifically for the platform. Pop’n TwinBee changes many of the mechanics of its predecessor, and generally makes it easier, though it’s still a very familiar game. 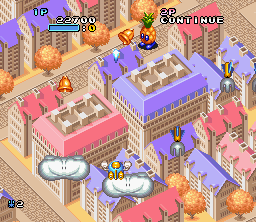 As the story begins, the heroes are patrolling Donburi Island when they meet a girl named Madoka. Her grandfather is the famous scientist Dr. Mardock, who usually uses his talents for good, but has bumped his head on a pole and is now determined to conquer the world. To reach these ends, he creates the Donguri Army (“donguri” means “acorn”), so TwinBee and WinBee set off to keep him in check. The plot is based on one of the TwinBee Paradise drama CDs.

Having been developed for a console, Pop’n TwinBee is quite a bit easier than Detana. Rather than dying in one hit, the ships are equipped with an energy bar. However, you only have a single life and need to restart the stage when you die, though the Bees don’t lose their arms anymore when hit. Moreover, they now have the ability to use their fists to deliver powerful blows to nearby enemies. It now takes several hits for a bell to cycle colors, so it’s easier to grab the one you want without accidentally hitting it again and changing it. The charge shot is gone, but the standard weapons are now more powerful, and have auto-fire capabilities built in. And the interaction between the two players is more amusing than ever, as you literally throw your buddy against enemies, making them bounce all over the screen (don’t worry, it doesn’t hurt them). The players can also give energy to each other, in case one is running low. You’re also granted a limited number of cluster bombs that attack everything on the screen 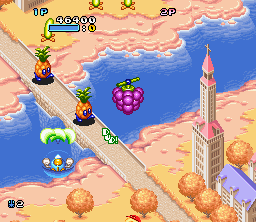 You can choose from three different Option formations at the beginning of the game. The default setting shadows the player like in previous games, but there are also formations that rotate around your ship, or move in perpendicular lines, depending on where you’re positioned on the screen. Alas, GwinBee does not appear at all. Though the standard difficulty level is pretty low, you can increase it on the options menu, like most Konami shooters. There’s also a “couple mode”, which makes the enemies focus their attacks on player 1, in case player 2 is less skilled.

The game’s palette is soft and pastel colored, perhaps drawing from the second loop of Detana. The first stage, Dandelion Town, is a bright autumn orange; the second, Aqua Park, takes the sky cities from the previous game and sticks them underwater. The third level draws from Chinese artistry, with both flowing dragons and a replication of the Great Wall of China. Later areas feature sentries designed like playing card soldiers, like something out of Alice in Wonderland, an inspiration that was expanded for the sequel. The care put into the animation, both during gameplay and in the cinemas, do a great job in depicting the two Bees as the alive, sentient, and funny characters they are intended to be. The music style is similar to the previous game, and the compositions are catchy, though the samples sound rather flat compared to the strong instrumentation of Detana. 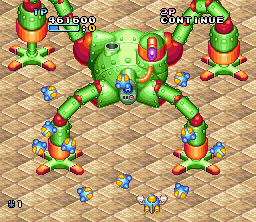 By 1993 Konami was very aware of the SNES’ strongest features (plenty of transparency effects for example) and biggest flaws (the slow CPU). It isn’t surprising, then, that they created a rather slow-paced shoot-em-up. TwinBee is the perfect franchise for this after all, since it puts great care into detailed background graphics that require more time to be appreciated. It’s a choice for atmosphere over frenzy; surely shoot-em-up experts won’t love this one. It’s also on the long side – it takes almost an hour to complete the game’s seven stages, and some levels do drag on. At least the game is almost without slowdown, unlike Axelay. And it’s not without its hectic moments, especially at harder difficulty settings.

Pop’n TwinBee never came stateside, but it was translated into English and published in Europe under the Palcom label. One can only guess at Konami’s rationale, but they probably guessed Europe was more willing to accept cutesy anime-like games at that point, as the company also took a chance on the Parodius games.