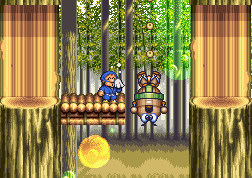 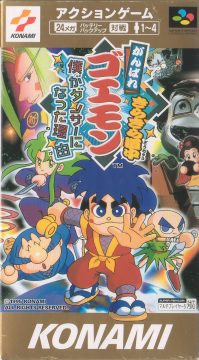 The fourth Super Famicom Goemon game – “The Glittering Journey: The Reason I Became a Dancer” – is the best of all of the Mystical Ninja games. The Goemon Impact shows on the doorstep and learns of a planet filled with people that look just like him. Mistaking him for their leader, they begin to worship him, but the planet is soon attacked by the devious Harakiri Seppukumaru. (“Harakiri” and “seppuku” are both methods of ritual suicide.) Unable to let his followers down, Impact flies his friend into outer space to save the day.

This game reintroduces the stage select from Goemon 2. Each character is marooned on their own planet, and these must be conquered separately before your team can reunite. You’ll still need to gather special powers for your characters, retaining some of the adventure game feel. The levels are fairly short, though, and there aren’t as many as Goemon 2. There are some town segments with minor puzzles to solve, which are annoying if you don’t know Japanese, but are a relatively minor impediment. While the character sprites are the same as in Goemon 3, the backgrounds are some of the system’s best. Konami also added some voice clips for the gang, as well as some insanely catchy music with extraordinarily high sound quality. This is a 24 meg game – huge for a non-RPG title – which accounts for the tremendous visuals. 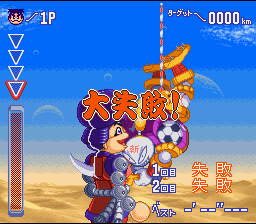 The first-person Impact fights are gone, and now each boss has their own mini-game. Each boss has their own mini-game. Some are lame, like a quiz game and a Track & Field ripoff. One of the better games lets you play Taisen Puzzle-dama, Konami’s answer to Puyo Puyo. By far the coolest (and hardest) is the bungee jump game – Impact is stationed on the ground, and an enemy mecha bungee jumps from lower orbit. You have to catch his sword as he falls before he slices you in half. The final boss battle has Seppukumaru tossing mini-Death Stars towards Earth, and you have to catch them and throw them back. All of these can be played with four players as well. And if you unlock all of the secrets in the game, you can play Time Pilot ’95, a rejuvenation of Konami’s old arcade classic. It’s not quite as cool as the levels from Gradius or Xexex in previous games, but it’s a nice throwback. 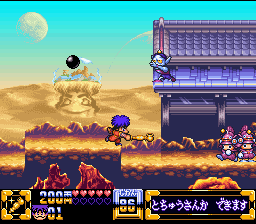 The rest of the game exudes even more of the wackiness one would expect – one boss is so obsessed with sports that you fight against baseball playing soldiers in a soccer stadium. One level has your character stalked by a firearm that looks suspiciously like the handgun from Doom. Another has you fighting robots of Ryu and Guile from Street Fighter II. Yet another crazy (and saddeningly short) scene has you riding on a car as it plummets through the sky. It’s this kind of wackiness that elevates Dancer not only above your typical side scrollers, but beyond the rest of the entire Goemon series. It also has the best game over screen, with a buff, hula-hooping demon. 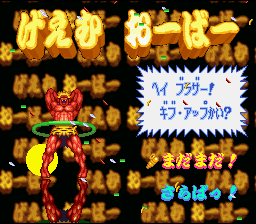