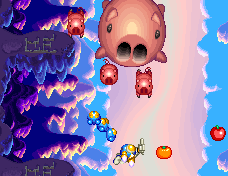 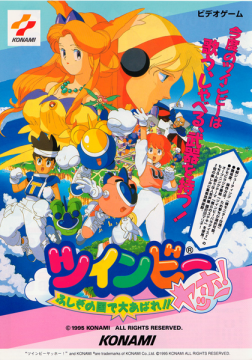 TwinBee Yahho! was released in 1995 in the arcades to celebrate the tenth anniversary of the series, and ported the same year to PlayStation and Saturn in a Deluxe Pack along with Detana!! TwinBee. It was developed by the Parodius team after their work on Gokujou Parodius. 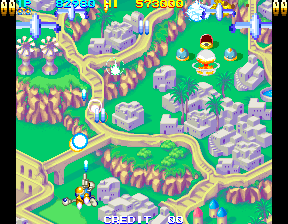 The story takes place in the Land of Wonders. Its ruler, Princess Melody, has been kidnapped by Archduke Nonsense, who has stolen her Harp of Happiness. The princess’s fairy companion, Flute, manages to escape, and alerts the TwinBee crew of their predicament, who set off to stage a rescue. A nicely animated intro shows Queen Melody imprisoned, as her loyal soldier Ace laments helplessly.

The gameplay is closer to Detana than Pop’n, with the return of the charge attacks. However, TwinBee Yahho! lets you choose between four charge beams: there’s the usual fire bullet from Detana!! TwinBee (which is the most effective), a flurry of fists (with the boxing gloves the heroes wear in Parodius games), an unlimited bunshin Option generator that lets you throw them at enemies (you’ll never need the green bell, but the lack of an extra weapon is rough), and finally a homing ground bomb (useful when your arms are broken). Despite this variety, Yahho!‘s arcade nature results in a less balanced game than Pop’n TwinBee. The energy bar and better control over the Options from the previous game are sorely missed. 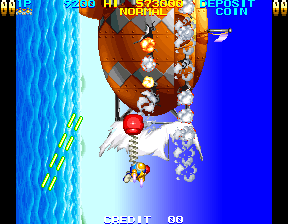 Also new are secondary weapons, found by destroying targets on the ground. These includes the spread bomb, a flame thrower, a 4-way shot, a bazooka, and a Vulcan cannon. You can equip two of these at once, one in each hand. GwinBee also reappears as a temporary companion, and Michael, the angelic pig from the Parodius games, makes a hidden cameo appearance in a similar capacity. These secondary weapons end up becoming the primary source of your firepower – it sure is better to get a ready-to-use flamethrower than to wait through four or five white bells to increase your regular shot. However, since your ships hold these weapons in their arms, any slight contact with the enemy will remove them. Also, having a secondary weapon in each hand is dangerous as that doesn’t leave any free hands to destroy the ground enemies.

There are also three gameplay modes: Practice mode is for beginners and makes it easier to obtain power-ups, though it only lasts until the third stage (unless you can fulfill certain conditions). Normal mode lets you play the whole game, while Special is the equivalent to a second loop, with higher difficulty and a different color palette for the stages. 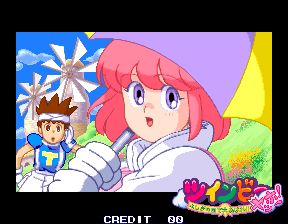 The intro features a vocal theme song with karaoke subtitles. The overall look of the game seems to pop out from an ‘80s anime. In addition to the intro and ending cutscenes, the pilots and characters pop in to chatter during gameplay, narrating the action and trading barbs with boss characters. The voice actors are the same as the TwinBee Paradise drama series. The music is again nothing less than exceptional, a true work of art, and suits the action perfectly.

The six stages are bright and colorful as usual, and more detailed than ever. There are some extremely cool pseudo-3D effects, like when you face off against Ace in the first level. After taking damage, he tries to make an escape, so your ships automatically kick into a loop-de-loop, causing the whole world to turn upside down as you continue pursuit. In a later stage, in a battle against Dr. Warumon’s battleship, your ships will automatically swerve sideways to avoid colliding with it, which is a little disorienting at first, but looks really cool. The series has always owed a debt to Lewis Carroll’s nonsense masterpiece Alice in Wonderland, so Yahho! goes full force by featuring a level filled with gigantic stampeding Cheshire Cats, and a boss battle against a prancing Tweedle Dum / Tweedle Dee duo.  Near the end, you take down a giant mech replication of Alice, piloted by the Archduke Nonsense himself. 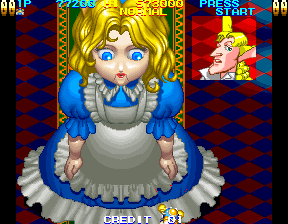 TwinBee Yahho! is much faster paced than the previous games, which is both its greatest strength and its greatest weakness. On one hand, it’s much more full of energy, especially compared to the lackadaisical Pop’n TwinBee. On the other hand, it’s also way too short, and you’ll blaze through all six stages before you even know it. Because of this, like Salamander 2, TwinBee Yahho! could be considered a case of style over substance – it clearly lacks the length and variety of the Parodius titles – yet it accomplishes perfectly the creators’ goal, to realize the ultimate anime shooter.

Yahho! sort of feels like a melancholic goodbye, a final departure for the series. It’s also the last proper TwinBee game featuring the main staff, including Shuzilow.HA, so in a sense it closes an era. 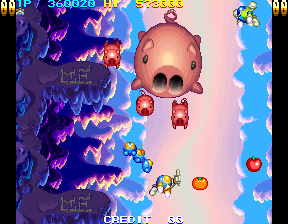 All three ports – PlayStation, Saturn, and PSP – are perfect ports of the arcade game, with some added voice acting. The PSP version is missing the two-player mode. Despite being a vertically scrolling game, it’s designed for horizontal monitors, so there is no tate mode, and no way to remove the black bars on the side of the screen, which is used to keep track of the bells you’ve collected.