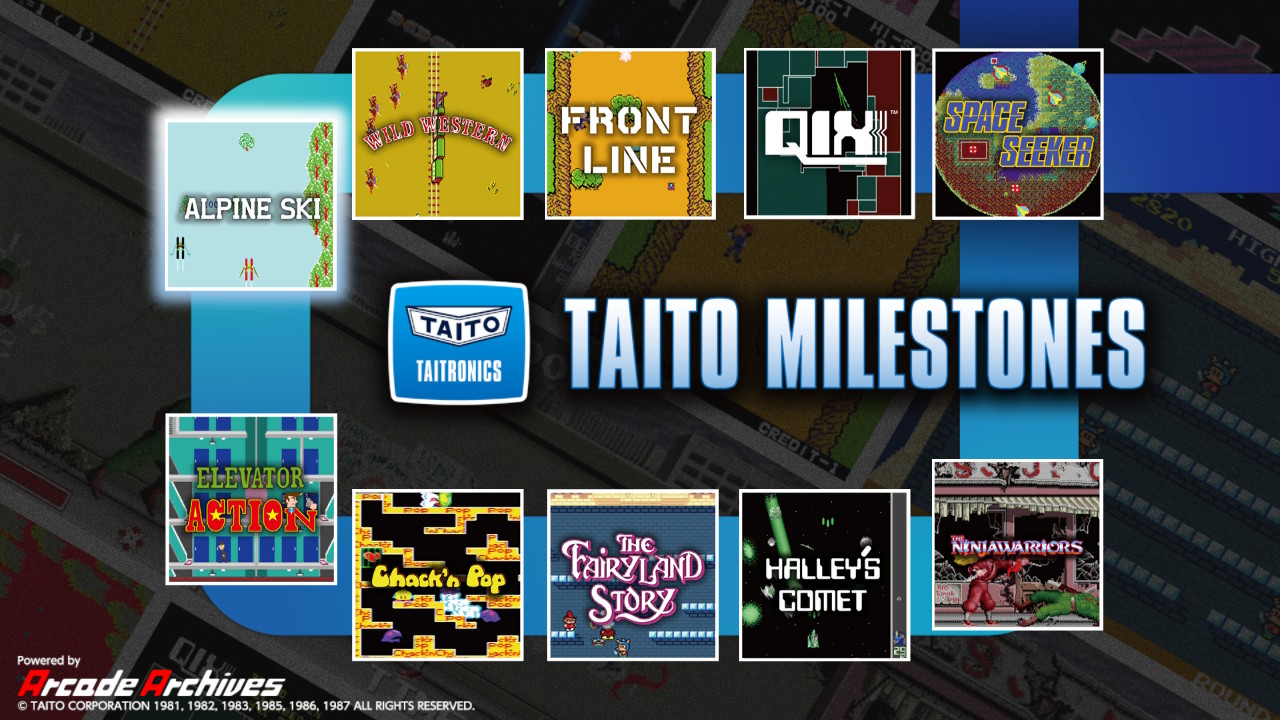 Taito Milestones is a collection of ten games from Taito’s early history, with releases spanning from 1981 to 1987. 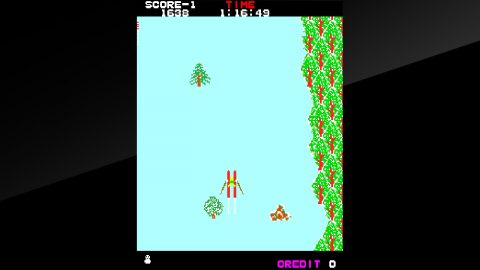 A skiing game where you weave through obstacles and other skiers, where you gain points based on both how far you travel and which score items you pick up. Carefully controlling your speed is the key for racking up the points without crashing. You have two minutes to play and no lives, as crashing just knocks ten seconds off your timer and sends you back to an earlier point. Later areas have flags which decrease your score. The course layouts are created to make you crash as much as possible until you learn both the controls and the stages, but once you get the hang of it, it’s a fun little score attack game. 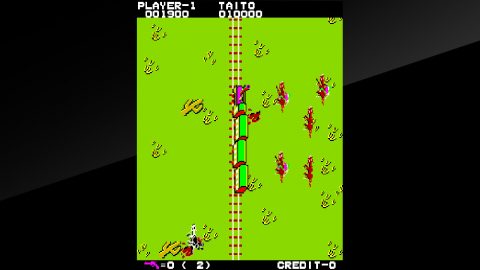 You control a horse-riding cowboy, protecting a train for other horse-riding outlaws. The arcade game used a rotary dial so you could aim and move in independent directions, though you can change it so you can move and shoot in the same direction. Hitting enemies is tough considering that you can only shoot two bullets at a time, they move slowly, and bad guys are constantly galloping back and forth. Your horse is also so large that it makes it tough to avoid getting hit. Plus, even killing rustlers will only knock off the rider, and their horse can still ram into you. This is too awkward to have much fun with. 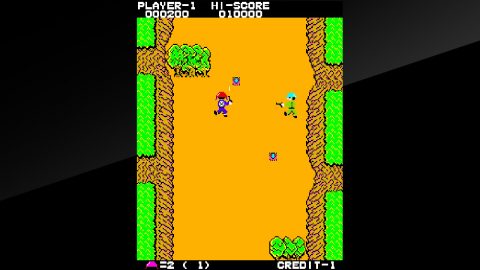 Capcom’s Commando is generally referenced as being one of the first run-and-guns, but Taito’s Front Line predates it by three years. It’s similar in that you run forward, shooting enemies with your gun and using grenades to hit enemies beyond obstacles. Like Wild Western, the arcade game used a rotary dial so you can move and shoot in independent directions. If you make it far enough, you can also commandeer one of two types of tanks, which make it much easier to destroy the enemy’s tanks that appear around the same time. It’s interesting to see one of the origins of the genre, but there’s a reason Commando gets all of the credit, and that’s because it’s a much better game, where Front Line is a bit too cumbersome. Even though it wasn’t terribly popular in the West, it did receive conversions to the Atari 2600 and Colecovision. 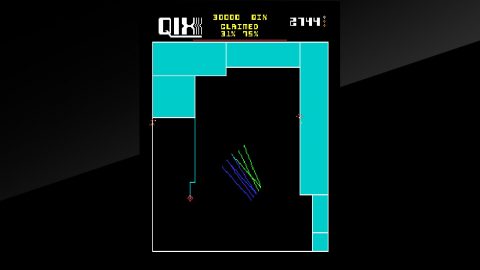 This game helped establish Taito’s early reputation as creators of unique and interesting games. Presented with a blank rectangular playing field, you control a little ship that can draw little lines turning right angles. When you connect the lines to complete the rectangle, you claim that part of the field, with the ultimate goal being to fill 75% of the screen. There are sparks that travel along the lines, which aren’t too hard to avoid. But the real issue is the flashing thing – that eponymous Qix – that bounces erratically around the empty part of the field, which will kill you if it touches any part of the line when you’re still drawing it. This is a brilliant game due to this risk-reward mechanic, where it’s always tempting to claim as much territory as possible, while hoping you’re quick enough to avoid getting caught. There are more modern variations of this game, including the sequel Volfied, but this original is still fantastic in its simplicity.  This was an early game by Taito America, and also one of the more well-known games on this release. 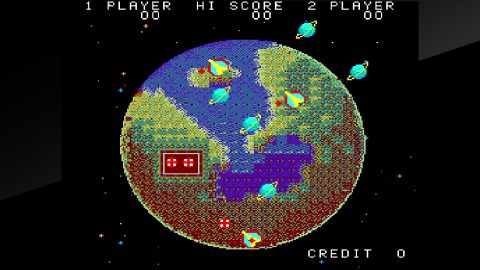 This is a planetary defense game with a few different gameplay styles. The game begins with a map view of the planet, where you control one of your spaceships and can pick from two types of targets. If you hit the red blips, the view will change to a first person perspective, where you blast enemies from a cockpit view a la Star Raiders. If you come into contact with their mobile fortress, it changes to a side-scrolling shoot-em-up a la Konami’s Scramble (also released the same year) where you shoot and bomb enemies. Even though this is basically just two more well-known games put in a different wrapper, it’s an interesting enough concept that works well. The planetary map music is the Mars section from Gustav Holst’s orchestral suite “The Planets”, which gives the action an epic atmosphere, even if it’s constantly being interrupted by the action scenes.  One of the most obscure games on this package, even in Japan. 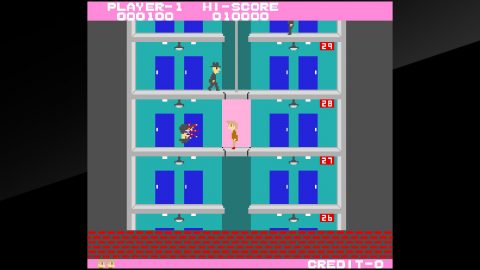 In Elevator Action, you play as a spy who’s rappelled onto the top floor of a skyscraper, and must slowly descend it, either by elevator or stairs. On the way to the bottom, you’ll also need to shoot enemy spies, as well as retrieve important documents behind red doors. Another early classic that’s seen plenty of sequels and variations (including the brilliant Elevator Action Returns), but this original is still quite fun. 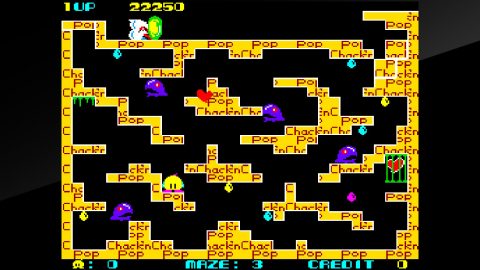 An eccentric game where you control a little guy called Chack’n, maneuvering through a series of tight platforms to release all of the caged hearts, and then reach the top of the screen. Chack’n has extendable legs which he can use to cling onto the ceiling. There are no enemies at the beginning of each level, but there are eggs which eventually hatch into monsters that will chase you. Your only means of attack are bombs, which can destroy the eggs before they hatch, or kill the monsters. While inventive, everything about this game is cumbersome – Chack’n never seems to be able to climb high enough, requiring you to take some roundabout routes to climb through the stages, and the bombs take too long to explode so they’re hard to use effectively. Still, an important title for Taito since Chack’n was basically their mascot for awhile, and many characters (including the monster enemies) appear in later titles like Bubble Bobble. 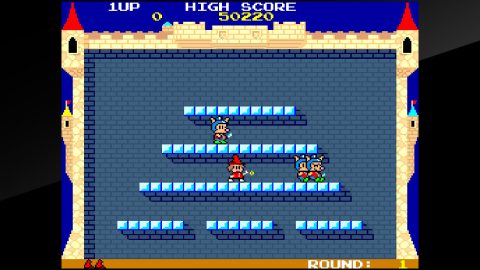 This single arcade action game is basically the predecessor to Bubble Bobble. As Ptolemy the witch, you can turn enemies into cake with your magic, and can either attack them further to kill them, or push the cake off ledges to smash other enemies. The many, many variations on this formula, from Taito and other companies with games like Tumblepop and Snow Bros., are a bit more interesting, but it’s still a fun little game. 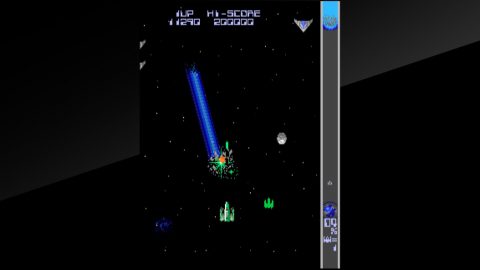 This is a vertical shoot-em-up themed around Halley’s Comet, which was passing by Earth in 1986. While the actual comet was a cosmic wonder, in this game it’s actually a threat, since large chunks of it have broken off and are headed towards the various planets of the solar system. In addition to shooting bad guys, you also need to shoot the meteor pieces; anything you miss will slowly damage the planet, and if that damage reaches 100%, you lose. This is pretty decent for a shooter of its era, comparable in quality to Toaplan games of the era like Tiger-Heli, even if the visuals are a little more simplistic. This also received a handful of follow-ups over the years, including the Game Gear game Halley Wars. 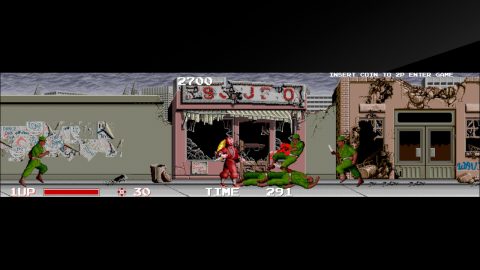 A side-scrolling single plane beat-em-up similar to Irem’s Kung Fu Master, except you control a ninja that can attack with either a short-range sword or long-range shurikens. While the gameplay is a little simple, it’s remarkable for its presentation, using three monitors for an incredibly wide playing field (a la Darius), with beautifully drawn backgrounds, striking character designs, and one of best early soundtracks by Zuntata, Taito’s in-house band. This game sticks out from the collection since all of the other games feel like early 1980s golden age titles, whereas this feels closer to a 16-bit era title, with much improved graphics and sound. It received an SNES sequel, which in turn received an updated remake in 2019, known outside of Japan as The Ninja Saviors: Return of the Warriors. 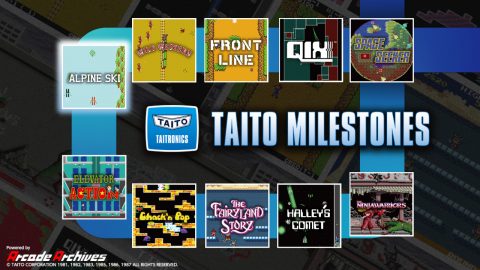 All games are emulated arcade versions provided by Hamster, using the same interface as their Arcade Archives releases. Almost all of these are also available separately, though getting these all together is a more economical if one were to purchase all of them.

There’s no avoiding the fact that the selection of games in this package is questionable. Taito has put out several other compilations in the past, including the nearly comprehensive Taito Legends/Memories sets back in the PlayStation 2 era. And Taito Milestones was released around the same time as the Taito Egret II Mini console, which has a far better selection of Taito classics that encompasses most of their essential games. There’s some rationale behind games like Qix and Elevator Action, which were early successes for the company, and Front Line and The Fairyland Story, which were establishing entries in well-known genres. And Space Seeker is neat because it’s never seen any kind of release before, even in prior compilations. But, no offense to the games themselves, inclusions like Alpine Ski and Wild Western are baffling. There’s no supplementary material either that could have put any of these titles in a greater context, leaving the impression that decisions were made based on a dart board. Most of the overall effort into the package seems have gone into the pricey physical limited edition, but that means little for the game product itself, which feels undercooked.