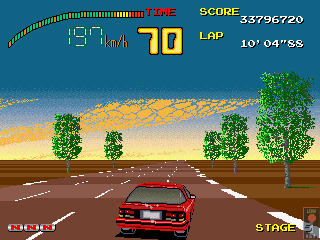 Sega’s 1986 arcade racer OutRun was a technical marvel, featuring brilliantly lush graphics, a stellar soundtrack, and super smooth scaling that put most of its competition to shame. Taito was one of the first competitors to really give Sega a run for their money with these type of games, and so they released Top Speed in arcades the following year, also known as Full Throttle in Japan.

There’s not a whole lot to say about the game itself beyond being an OutRun clone, though it does add some things. From a technical perspective, it adds in elements like underpasses, tunnels, and weather clouds, all things that were implemented in OutRun sequels. It also has a limited number of nitro boosts to temporarily increase your speed, which was, again, something Sega implemented in Turbo OutRun. The car is very easy to control, though – you can take pretty much any corner at top speed, so long as you can steer through it. It’s a game that really wants to go fast, as opposed to driving cautiously, hence the title. 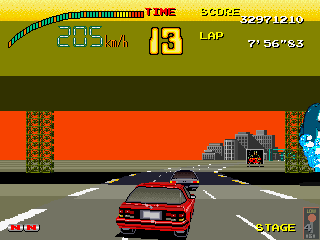 There are five stages, but rather than branching at the end of each level, most stages have a fork in the middle that will send you on an alternate track. The visuals – the scenery, the sky and backdrop – change within the levels, so there’s still plenty of visual variation, though ultimately it’s not as varied as OutRun, nor does it really maintain the same “world traveling” theme.

The soundtrack is pretty typical of late 80s Zuntata, which is to say that it’s really darn good. This is the one area where it’s completely distinct from Sega’s laid back, jazzy soundtrack, opting more for thrashing FM synth rock. There’s no theme selection, but instead it just cycles to a new track in each level. Unfortunately, the overwhelming sound of the engine drowns out some of the music, making it hard to appreciate during gameplay.

Top Speed is ultimately nothing special, but at the same time, as a clone of a more well known title, it’s still pretty good. It would also set down the technology that Taito would use to more innovative ends with their Chase HQ police chase series. 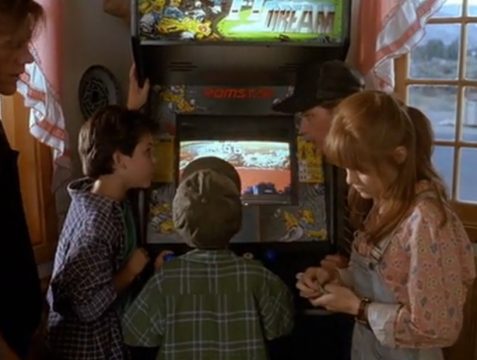 The game also makes a cameo in the 1989 movie The Wizard, though both the cabinet and characters refer to it as F-1 Dream, a totally different game by Capcom. It also plays a small part in the Black Mirror episode “San Junipero”, as the main character sees it in an arcade. She sees the car crash, making her uncomfortable, as she recalls a car crash in her own past. According to series creator Charlie Brooker, they wanted to use OutRun but they couldn’t clear it for use, so they went with Top Speed instead. Another Taito arcade game, Bubble Bobble, is referenced earlier in the scene.

Top Speed was only ported to the Sharp X68000 by SPS. While the computer was fairly powerful, it lacked sprite scaling functions – not only are the visuals incredibly choppy, but most of the sprites are fairly low res, and overall it’s a poor conversion.