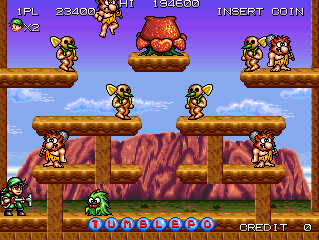 It’s the near future and Earth has been overrun by monsters, mutants and aliens. The only hope for the planet are two young guys… Given that this game was made by Data East, this description makes it sound like another violent, bloody beat-em-up in the vein of Night Slashers or Two Crude. However this time it’s actually a goofy, rainbow-colored single-screen platform game set in several real world locations. 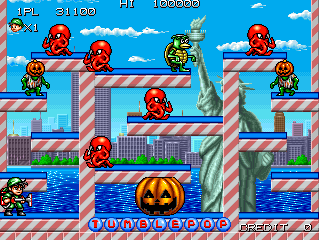 Tumblepop feels like a combination of two other popular arcade titles from the early 90s, Pang and Snow Bros. Let’s see: two boys in matching outfits go around the world defeating creatures by putting them together and making them crash one into another. This time however the heroes don’t pelt enemies with snow, but instead suck them into weapons resembling vacuum cleaners that they carry on their backs. When they capture enough baddies they can release them in the form of a tumbling (hence the title) ball of bodies that rolls around the level: it eliminates every enemy standing in its path and reveals invisible hidden bonuses such as gems, money or letters of the alphabet. If you manage to spell with these the game’s title, TUMBLEPOP, you are granted access to a simple bonus stage where extra lives and points items can be collected. At the end of each level there is a huge boss that can be defeated only by throwing back at him the enemies he spawns or his own weapons. Don’t keep enemies imprisoned for too long, or they will free themselves blowing the weapon’s canister up and taking one of your lives away with it. It’s possible to stun them by grazing them with the “beam” of your weapon – a useful move when you need to keep an eye on the enemies’ movement up or down the platforms.

There are ten levels with ten stages each, even if you never see a hundred screens all at once, because the first few locations you face only make you fight through the first half of the stages. It’s a nice idea to prevent the game from getting too long for coin-op standards. However, after having finished the eight countries and the ninth level set in the void of space, the disappointing final level on the Moon forces you to fight again all the previous bosses in sequence plus the lame true final boss, adding nothing of interest to the game (even the background image of the Earth is recycled from the intro). 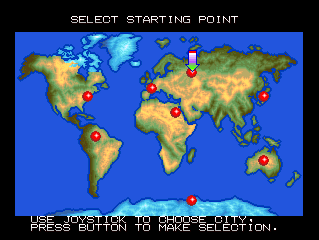 For once, a world map that is an actual map of the world.

National stereotypes are easier to convey in games like one-on-one fighting games (as Street Fighter II so brilliantly showed), but for this kind of game designers and artists have to work within the conventions of the genre. So, to name a few, Antarctica becomes the typical “ice world” with snowmen and yetis, and Brazil serves as its opposite, the “fire world”. For some reason, France is set as the “mechanical world” full of robots and conveyor belts, while the USSR is gently represented as the “circus/fun fair world”, populated with clowns, magicians and Karnov-like fire-eaters. And while many platformers have stages inspired by Ancient Egypt, here we have “actual” Egypt, complete with mummies, hieroglyphs and a couple pyramids too many.

There are also a few Data East self-references: the baddies in Australia are for the most part lifted from Joe & Mac‘s enemies, and the astronauts in the space level are super-deformed clones of Chelnov. Both of the tunes for the levels actually refer to this, being titled “Fighting Caveman” (which is the Japanese subtitle of Joe & Mac) and “Ah! It’s Chelnov!”. The guys at Data East sure loved their radioactive Russian miner.

Speaking of background music, it has been handled in an interesting way by composer Tomoyoshi “TOM” Sato: basically, the main melody stays the same for every level, but the arrangement and instruments change according to the specific world area the level is set in, even incorporating parts of popular songs. For example, the Australian BGM is heavy on percussion instruments, while the Japanese one has flutes and strings, and the USA and France melodies start with the first few notes of their national anthems and go on like an early rock-and-roll tune and a waltz respectively. The sound effects are nothing special instead, save for the weird retching noises the bosses make when they’re damaged and the few instances of vocal samples such as “Let me pop!” at the beginning of every stage, and what sounds like “You Did!” (or “you dick”…) whenever a stage is completed. 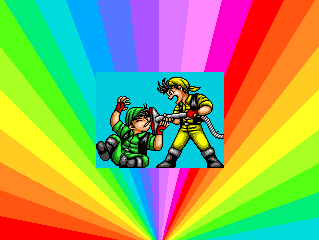 One of the intermission images.

One year later, the game was ported to, of all consoles, only the original Game Boy. Given the limited capabilities of the portable system, the whole “world tour” idea had to be dropped and the levels became set in generic places such as a castle, a circus and a pirate ship; however, they look all identical and bland when traversed. The sprites, on the other hand, are remarkably faithful to the originals, especially the big bosses, save for the Egyptian genie that has been replaced by some demon/ghost thing; the final boss, the mad scientist on a mecha, has been substituted as well with a far more interesting six-armed cyclops thing, being controlled by some dark specter that is the true final fight.  This time the world map is not just for choosing the starting level, but is a playable hub and, after having entered a level, another map opens up showing the road to the boss’ lair, a little like Super Mario Bros. 3‘s world maps. As a nod to the skipped stages of the original, it’s not mandatory to complete all these stages to fight the boss. 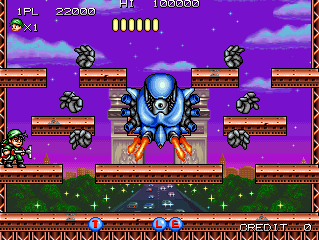 The stages are mostly multiple screen affairs that extend in either height or length. The enemies spawn from demonic doors, or something, that can’t be destroyed, there’s just a few of them on-screen at any time, and when you spit them out after having sucked them up, they turn into projectiles composed of one, two or three stars, that can still tumble albeit at a much slower speed. Every stage has a set number of them to defeat. The bonus alphabet letters are still there, as is the bonus stage, but the items (speed up, vacuum power-up, etc.) are handled differently: they aren’t activated immediately upon picking them up, but kept in a sub-menu that can be accessed by pushing Start. Item points are absent, since this time the coins aren’t there for score, but are used to buy more items in the shops scattered around the world map. Since there’s a visible time limit and you can’t complete stages in a few seconds any more, alarm clocks have been added to the item stash to buy a little more time, as well as temporary invincibility. Being a game for a console with a short battery duration, 9-digit passwords are given every time you complete one stage. There’s even “Construction Mode”, that is, a level editor, but it isn’t too flexible, there are no explanations for it (you need to keep the B button pressed to highlight the different blocks) and only up to three single-screen creations can be saved. All in all, a useless addition.

As expected, it’s not a direct port but rather a “reimagining”, and as such plays very differently. The arcade game is all about fast reactions and twitchy gameplay, the fun of causing chain reactions with the tumbling balls and the challenge of cleaning a stage with a single move; it starts easy (since you can suck the enemies in through the walls by default) but becomes slightly harder with the more complex later level layouts, moving platforms, etc. All in all not a “deep” experience for sure, but tailored to the arcade gamers’ taste, colorful, bizarre and fun enough to be memorable. The home version takes away half the fun with the removal of the world travel theme, and keeps the core gameplay but makes it much slower and more deliberate, to the point that most stages feel like a chore after a while, and the boring graphics do not help matters. Slowly inhaling monsters is not so fun when you have to follow them around everywhere and constantly switch to the sub-menu to go a little faster with the rollerskates. Also, it’s very hard to judge where the tumbling “ball” will go once shot forward. It’s a playable title, for sure, but the restrictions imposed by the system are too many for it to be enjoyable for more than a few games. In 2012 this version of Tumblepop became one of the retro games available for Wii’s Virtual Console service. 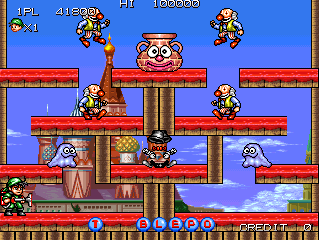 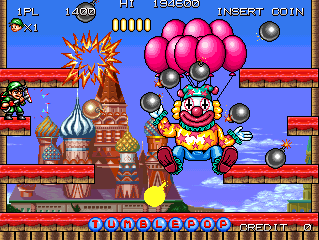