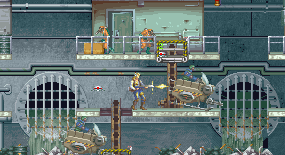 Unlike the other games in the series, Elevator Action Returns only deals with stealing documents in the first mission. All of the levels afterwards deal with you trying to defuse bombs within each building. The story deals with a psycho in a red suit placing bombs randomly in buildings to bring on a new order of society, or some nonsense of a revolution, and it’s your job as a spy to stop him. Unlike the original, this game features three characters to choose from. 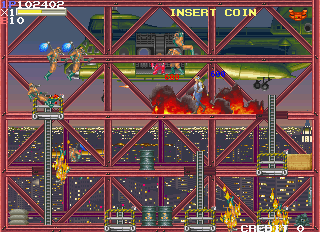 Kart Bradfield is the speedy character of the game, being able to run the quickest and jump the farthest. His subweapon is a Hand Grenade (which unlike in the Game Boy version, is actually useful) that clears an entire floor of enemies. His gun is the Glog 18, a spoof of the Glock 18 handgun. Edie Burret is the gun expert, possessing the most fire power and being capable of shooting at an incredibly fast speed. Her subweapon is a Fire Bomb which sets off a small blaze that will instantly burn enemies to death if they foolishly walk into it. Her gun is the Berltta M92F, a spoof of the Beretta M92F. Jad the Taff is the stereotypical powerful character, and the only one who can damage enemies just by running into them. His subweapon is the sensor bomb, which will set off a huge explosion when an enemy comes within its proximity. His gun is the Dessert Eagle, a hilariously named spoof of the Desert Eagle. 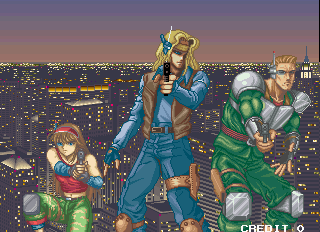 One thing you’ll notice when you first play is that this game is much faster than its predecessor. Your character can now run and make longer jumps than before (although now you can’t jump and shoot at the same time). Something that was carried over from the Game Boy version is the ability to go in other doors for items, though they’re now merely colored blue instead of featuring a question mark on them. While there aren’t any weapons you can acquire from these doors, they can give out points, health (you have a life bar now instead of dying from one hit), or more supplies of your character’s subweapon, so entering as many of these blue doors as possible is usually a good idea.

There are other weapons you can acquire by finding and breaking boxes, such as a machine gun or a rocket launcher. They have limited ammo, so you usually have to be mindful as you aim, as they aren’t common to find. 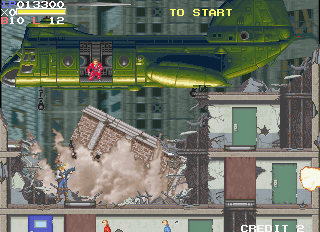 The game features more than one type of enemy now, and some take more than one hit to defeat. They range from guys in trench coats, suited businessmen, men wearing bio-hazard suits, punks in Hawaiian shirts, policemen with riot gear, and Doberman Pinschers. True to the nature of the game, they’ll come out of various doors and pursue you as you search for bombs. Security cameras are another new addition, and are usually placed near the red doors with the bombs. If a camera sees you, an alarm will go off and more enemies will show up, making it pivotal to shoot the camera before you blow your cover. The locales are also different from the original, as your mission, covering six levels in total, can take you from an airport terminal to the sewers to an oil rig located in the sea, rather than just being in a building. 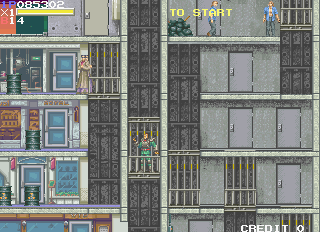 The one thing this game really excels at is its presentation. The graphics look fairly realistic, but not too serious, much like any good 80s action game. The sprites are small but impressively detailed, with some incredibly smooth animation. The music is passive light jazz and provides an element of classiness. It was composed by Yasuhisa Watanabe, who also worked on Metal Black and Growl.

What makes Elevation Action Returns really rock, however, is the fact that you never know what will happen within a given level. During the first mission, once you retrieve two documents, the upper part of the building explodes, while a helicopter flies by with a man in a red suit spouting something about a revolution. During the second mission, one of the bio-hazard suit wearing goons is patrolling the airport terminal. He happens to look out the window and notices something in the distance, calling the others over to try to figure out what it is. As it turns out, it’s your helicopter and you’re flying right at them. They start to run away from their impending doom, only to be killed as you slam your chopper into the glass window, effectively destroying your own means of transportation. It’s always awesome and makes you wonder just what will happen next. 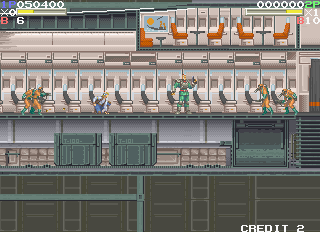 While leaps and bounds beyond than the original game, Elevation Action Returns didn’t do so well commercially. Whether you blame the popularity of fighting games in arcades at the time or the general decline of arcades during the era, one thing is for sure: the game was not timely, since it’s a sequel to a game that was made 11 years prior. People who saw this in arcades probably never encountered the original, and the people who played the original probably didn’t know of its existence, due to the extended period between it and when the sequel was produced, which really is a shame.

Elevator Action Returns was ported to the Saturn in Japan by Ving, and given the cult popularity of the game, is extremely expensive on the secondhand market. It’s basically an arcade perfect port, and if you beat the game, you unlock the original Elevator Action to play. 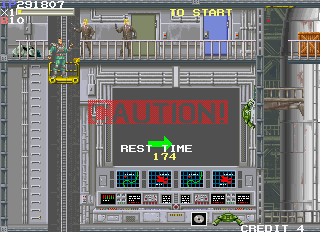 Elevator Action Returns also appears in Taito Legends 2 for the PC, PS2, and Xbox in American and European territories, while Japan would see it on Taito Memories Vol. 1 for the PS2. The emulation on the American and European PS2 version is a bit off, since the rapid fire on the machine gun just doesn’t work, and adds in a bit of extra slowdown. By comparison, the Japanese PS2 version has a bit of slowdown, too, but the machine gun functions correctly. The Xbox and PC versions have other glitches, like lights that don’t go out when you shoot them. These all display with blurry, filtered visuals instead of the crisp 240p of the Saturn port.