Panic Restaurant is one of the many late NES releases to fall between the cracks, and it is unfortunate that it has done so, as it’s actually quite a good action-platformer. You essay the role of the Boyardee-esque chef Cookie, owner of the oddly named “Eaten” Restaurant. A nefarious rival chef called Ohdove (who greatly resembles Snidely Whiplash and possibly a prototypical version of Waluigi) knocks out poor old Cookie by dropping a lot of fruit on his head and takes over Eaten with his army of foodlings. From the get-go, the ever-present visual motif for Panic Restaurant is flagrant: Food. Lots and lots of evil food trying to kill you, specifically. 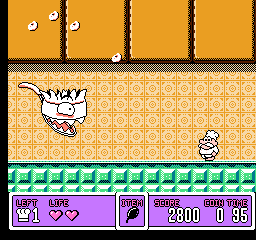 Right at the start, you’re assaulted by headless baked chickens and large carrots which pop out of the ground. The first boss is a large pan filled with popcorn, which bursts and flings popped kernels everywhere after hitting it thrice. Rolling pizza, jiggling flan on walking dishes, onions which peel down after the first hit, and diagonally-flying meat kebabs are among the many edible enemies you will face. It’s almost as if BurgerTime was made into a full-fledged side-scroller! 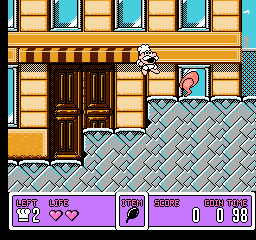 The incredibly colorful and cheery graphics are very immediately noticeable when first starting this game up, yet another example of a title released in the fading years of the NES and made the most of its evolved capabilities. Panic Restaurant has a sort of overall pastel palette with light yellows and blues predominantly floating about the first level and a generally calming appearance throughout the rest of the game. The enemies all seem as if they wandered out of an old-timey Warner Bros. cartoon, and the game does feel as if it was meant to appeal to a younger audience. It is regardless enjoyable for all ages, not dissimilar to how the Kirby series can be appreciated by anyone young or old. The soundtrack matches the cartoonish style, with a mostly bouncy and upbeat set of tunes which all fit their appropriate stages. 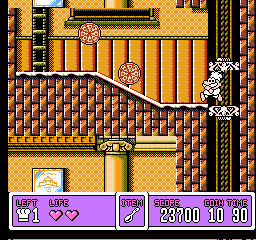 Cookie’s primary weapon is the tried-and-true frying pan, which is quick but has a pretty darn short range. It’s always there if you don’t have any of the other four weapons, all of which beef up your power significantly. The most common power-up is the spoon, which is unrealistically larger than the pan and doubles your attack range. You can also pick up dishes which come in potentially unlimited supply and are thrown in an arc, having more range than the pan or the spoon and can hit enemies below you if you aim it just right. 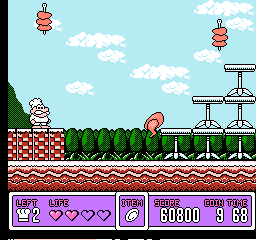 Then there’s the almighty pogo-fork, which completely changes your method of attack by making you able to actually destroy enemies in the classic Super Mario Bros. “jump-on-their-head” style. It can be tough to use as it disables the use of the B button for attack and has you constantly jumping around, but it’s a formidable albeit somewhat situational weapon. Finally, the cooking pot makes you completely invincible to attack for several seconds as Cookie spins around like a doof with the pot on his head. These weapons are all helpful but are taken away if you are hit even once (save for the pot, naturally), so if you want to keep belting out better offense, you’ll have to closely mind your defense. 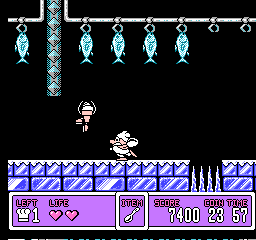 Cookie can only take two hits, which certainly seems like a small amount of damage, but the game’s easygoing pace makes it manageable to protect yourself once you get used to the short range of your default frying pan. Still, pieces of candy can replenish one of your missing hearts, and lollipops fully recover your life in addition to adding another heart, maxing out at four hearts for until you lose all of your lives. Of course, you can also pick up bonus lives in the form of chef hats, most of which tend to be somewhat out of the way and a bit tricky to collect. Amongst these permanent power-ups are briefly-bouncing coins that fall from clobbered enemies and shower out from wrecked bosses. 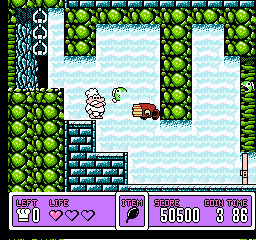 In between levels is where you get to make use of all those coins, where a slot machine can potentially add to your points, give you a heart, max out your hearts at the limit of four, or even snag a bonus life. Some stages even contain one of two bonus levels, where you either get to catch bird eggs falling on a pan (while avoiding bombs) and use a goofy extending hand to snag fish leaping from the ocean (and not grabbing exploding fish which resemble Bullet Bills from the Mario universe). Seeing as how points do earn you bonus lives, it’s worth tracking them down, as the latter stages get gradually lengthier and having to start them over can be annoying. You thankfully have infinite continues, so the game ends only if you run out of patience. 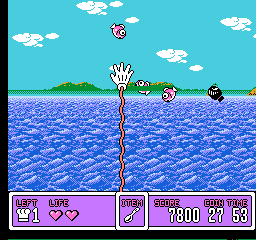 Panic Restaurant is not an incredibly challenging game, but it’s not a complete pushover either. It’s certainly not a lengthy one with only six stages for play, each one named after a meal course: Appetizer, Soup, Salad, Fish, Meat, and Dessert. It builds on a steady difficulty incline in which each stage is tougher than the last, but it’s a slight tad simpler to handle than that which constitutes standard action-platformer fare. It takes a bit of timing to hit enemies with your short-range frying pan, but once you get used to it, you’ll be good for most of the game 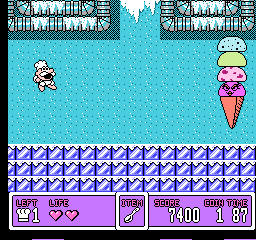 The bosses are pretty easy once you’ve figured out their patterns, like the rogue microwave which releases running fried chickens, the walking wok pan which bombards you with shrimp from above, and the giant hamburger which splits its patty apart from its buns which then attempt to squish you. The last two stages is where the difficulty gets up to a substantial level, as the penultimate level is the dreaded ice world, and the amount of old-school instant death sharp spikes ratchets up. Enemies come at you from weird angles and you have to not get knocked into pits, and the large ice cream cone at the end attempts to destroy the floor beneath you. 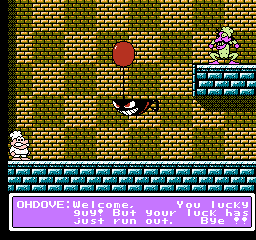 The finale against Ohdove is a decidedly interesting change of pace where you duke it out in an aerial duel. You get a unique weapon for this last battle in the form of eggs, which don’t have too much for horizontal range but can be dropped below you indefinitely. Meanwhile, Ohdove fires carrots at you in a three-way spread and keeps charging at you with his evil balloon pan. You have to avoid his attacks and hit his balloon quickly enough before he can re-inflate it, actually making for a tricky final battle if you play too conservatively. 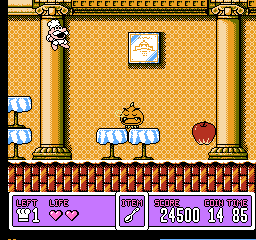 That’s all there is to digest about Panic Restaurant, one of the last uncomplicated 2D action games on the NES. It’s quite a delicious dish that may come in small portions, but it’s a rich and delectable selection. 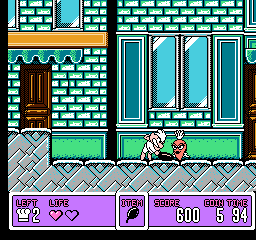 Before Panic Restaurant came to Western territories, it was called Wanpaku Kokkun no Gourmet World in Japan, with “wanpaku” meaning “naughty” (a familiar word to Splatterhouse enthusiasts) and “Kokkun” being the name of the protagonist. Kokkun looks much younger than Cookie (below), and instead of a frying pan, he bashes opponents with his head. It has the exact same functionality as Cookie’s pan, but it looks significantly goofier. The bad guy is also called “Hors D’Oeuvre” (the French word for “appetizer”), likely what the rather goofy “Ohdove” was supposed to be in America but was badly localized. Wanpaku Kokkun mostly plays the same as Panic Restaurant, but it is quite a bit easier with less frustrating enemy placements and a bit more generosity in power-up distribution. 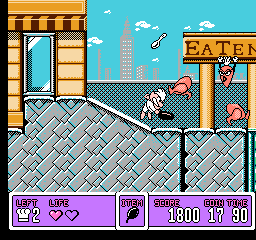 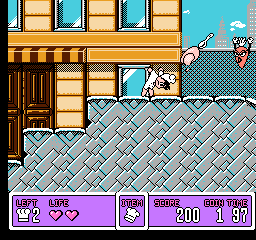 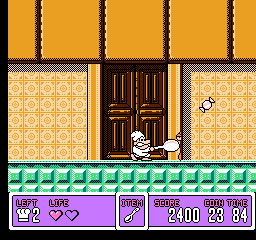 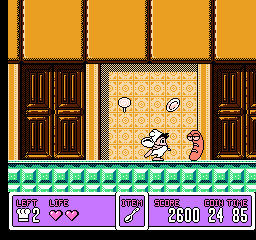