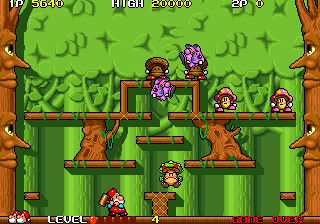 In the late 80’s, after the smash success of Bubble Bobble, Taito experimented more with platformer games. While most of them were not nearly as successful as Bubble Bobble, most, if not all of these games were as fun and charming as Bubble Bobble, even if it took years for some of them to finally get noticed by players. Such examples being Rainbow Islands, The New Zealand Story, and Liquid Kids. In a strange twist, in 1989, Taito decided to make a game that stuck more closely to the Bubble Bobble formula after Bubble Bobble came and went, and that game is Don Doko Don.

In Don Doko Don, one (or two) players control two dwarfs, Bob and Jim, on their quest to save the princess (and king) of Merry Land. The way they dispatch their enemies is unconventional, yet not unlike what would be seen in a cartoon – they use giant mallets to bonk enemies on the head, and while in their crushed state, Bob or Jim has to fling them across the stage to dispose of them. Bob and Jim can also pick up power-ups to increase their speed, improve their mallets, and more. Besides the new way of dealing with enemies, if the player is familiar with Bubble Bobble, they’ll feel right at home here, since the game plays extremely similarly otherwise, right down to the co-op action, the abundance of secrets, and the unkillable enemy that appears when one takes too long on a level. 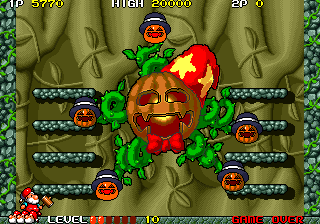 There are a couple slight differences, however. The “EXTEND” system is gone, for one. They’re replaced with bonus stages that can be accessed from time to time. Also, the game only features 50 levels compared to the 100 levels that Bubble Bobble features. However, an extra 50 levels can be unlocked via a hidden door on the first level, called the “Reverse World”, much like the “Super” mode in Bubble Bobble. Unlike Bubble Bobble, where it’s needed to play the game with another player in order to get the best ending, getting through these secret 50 levels is the key to getting the good ending, since a normal playthrough will only let the player save the princess… with the king nowhere to be found. However, this is a positive, as the game is long enough, yet never really overstaying its welcome on a playthrough, and the harder levels complement the normal levels just fine.

The graphics are not unlike what one would see in a typical Taito platformer, with detailed designs and animations, and an overall cute style to it, which really shines in particular on a lot of the enemies and bosses. The game also flaunts a fair amount of sprite scaling effects (courtesy of the powerful Taito F2 hardware) a bit before the SNES made it cool, and it’s still somewhat impressive even to this very day. The sound department is pretty good too, with the soundtrack, composed by Yasuko Yamada of ZUNTATA fame, being filled with jaunty Eastern European-styled tunes. The track that plays in World 1 is a very good example of this. 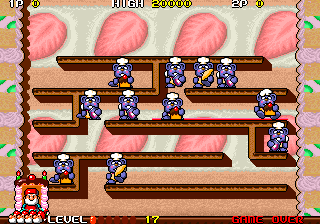 While the game does a good job of being a solid elimination platformer, it’s the main flaw of the game, really. It doesn’t do much to be original compared to the million other Bubble Bobble-like games at the time, and for a game made by the same company as it, one would imagine they would’ve tried to mix up the formula to try and distance it a bit more from Bubble Bobble. Besides that, Don Doko Don is still worth playing because it’s still fun, and it’s yet another example of a good platformer game from Taito. And due to those reasons, it still holds up well to this very day. If someone wants to play a Taito platformer that’s totally different from Bubble Bobble, though, they’ll have to look elsewhere.

Not long after the game was released in arcades, Taito commissioned IPL to develop two Japan-exclusive home ports of the game, one for Famicom, and the other for PC-Engine. The Famicom version is heavily downgraded from the arcade version, but is otherwise a faithful port. It’s a bit lacking in terms of sound though, and the music really took a hit here, so one might be driven to mute the audio after a while. The PC-Engine version is even more faithful to its arcade counterpart, minus the sprite scaling effects, and a slight hit in sound and some graphics. A complaint of both versions is that there’s five continues total, and while it might not be a problem for most, unlimited continues would have been better. Otherwise, while both ports aren’t really bad ways to play the game per se, the PC-Engine version is definitely the better choice of the two. The arcade version is also featured on the Taito Memories Joukan and Taito Legends 2 game compilations via emulation. 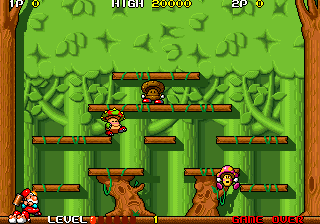 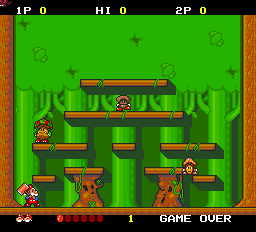 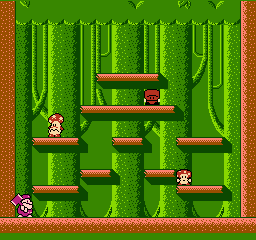