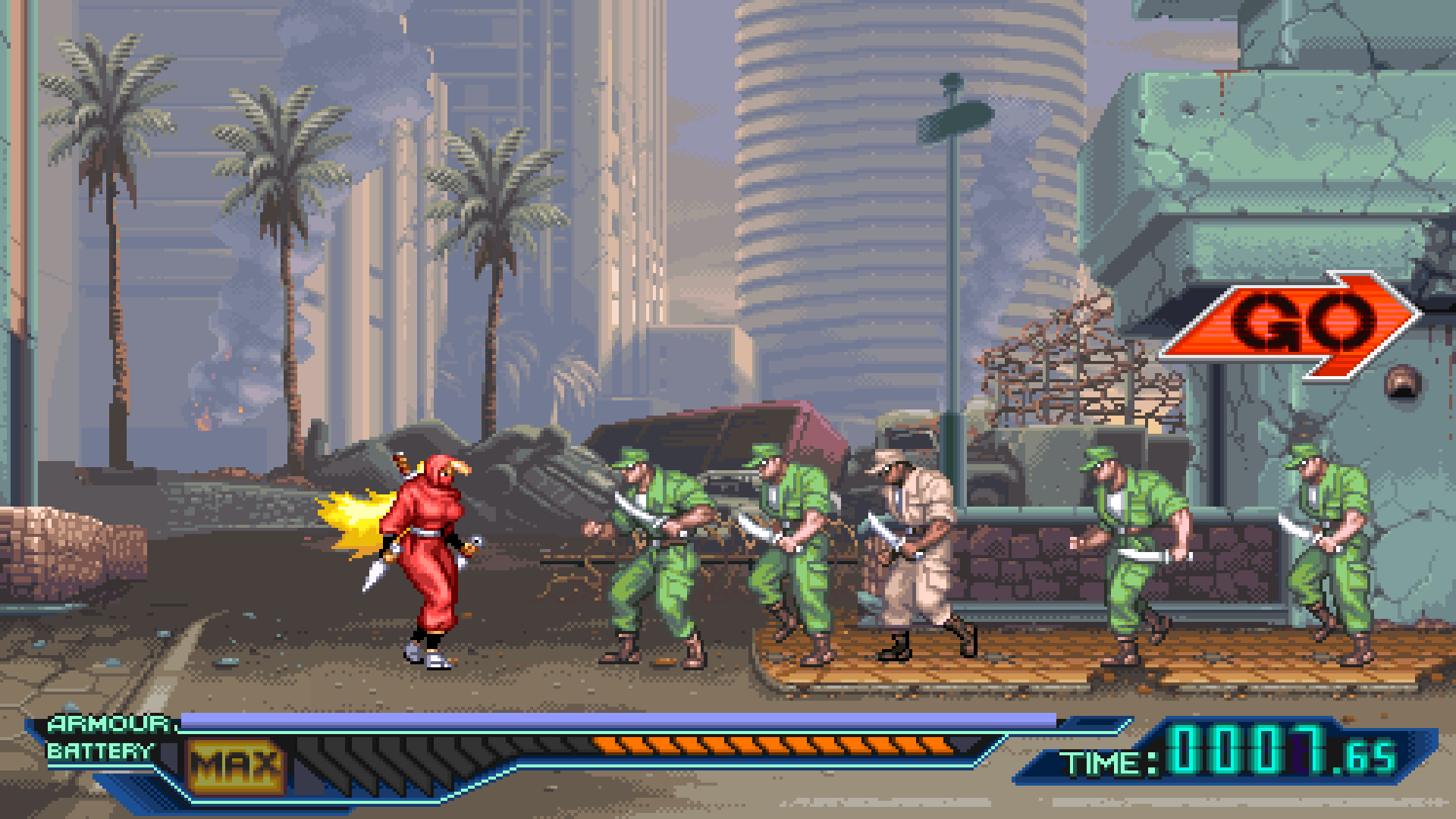 The Ninja Saviors: Return of the Warriors / The Ninja Warriors Once Again (ザ・ニンジャウォーリアーズ ワンスアゲイン) - PlayStation 4, Switch (2019)

Tengo Project is a small group of developers working within Natsume-Atari to update some of their classic games. Their first release was Wild Guns Reloaded, a heavily revamped version of their SNES gallery shooter. For their follow-up project, they decided to go with The Ninja Warriors for the SNES, itself a pseudo-sequel to the earlier 1987 Taito arcade game. These conversions are so admirable because most other companies just put out emulated ROMs, or in the case of M2 and the Sega Ages games, adding minor enhancements to the classic games. These, however, are ground-up remakes, made suitable for modern high definition televisions, but still done in a retro style. In Japan, the game is known as The Ninja Warriors Once Again, but due to confusion with the American Ninja Warrior TV show (and its tie-in video game released earlier in 2019), the overseas version was retitled The Ninja Saviors: Return of the Warriors. 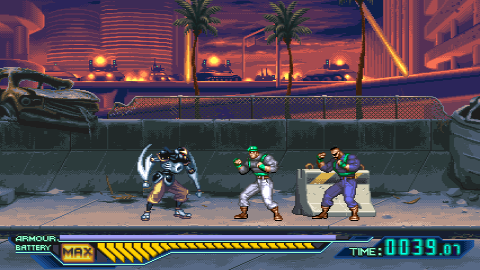 The setup is the same as the original game – a rebel group has sent a group of android ninjas to assassinate the tyrant leader Banglar. The 2D graphics are the most noticeable improvement, as nearly everything has been redrawn to make it look more like something on a 32-bit console rather than the 16-bit SNES. The main sprites have been slightly touched up and given some much smoother animation, while the backgrounds are substantially more detailed, along with foreground objects that become transparent whenever anything walks behind them. It really has some brilliantly done pixel work that makes the SNES version look rather thin in comparison.

Due to both the low resolution of the original visuals and the 16:9 playing field, the screen is zoomed out substantially compared to the SNES game. It’s not quite as wide as the three horizontal CRTs of the arcade game, but it’s close, and so it ends up feeling a little more faithful. With all of the extra room, not only does it feel less cramped, but it also allows for more (and larger) enemies to appear. Levels also have bits of scrap that you can pick up and toss around.

There have been substantial updates to the mechanics as well. The SNES Ninja Warriors was such a solid game because there was a relatively wide amount of moves you could pull off in spite of only using three buttons. Many enemies go down in a single hit, but for the ones that took more damage, there were different combo finishers with varying directions and ranges, depending on how overwhelmed you were. You could also grab and throw enemies in any direction, a typical move for most beat-em-ups, but required here for the final boss encounter. Defensive moves were just as important as offense ones, as you could block most attacks directly or flip around to attack from behind. Different tactics were required for the three characters, seeing how the hulking ninja could only barely jump, and instead used their jet pack to boost around. 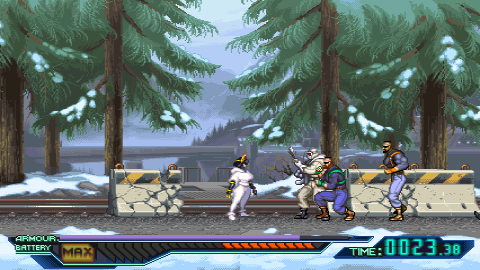 The designers of the remake was conscious of this versatility, and expanded on them greatly. In the SNES game, your “Blaster” meter was mostly used for a screen clearing explosion, though there were also a few combo finishers you could execute if the meter was filled, which drained it slightly. Those moves are still present but each character has a number of added special moves, like Kunoichi’s shuriken attack. While these still consume a bit of meter, it doesn’t need to be maxed out, so you can use them more often. Considering that the meter drains if you’re knocked to the ground, there’s always an incentive to use it before you lose it, and encourages you to play defensively. There are also subtle tweaks to the ways enemies take damage that make them easier in juggle, and generally the action is much more satisfying than the original version, where it was already pretty fun.

Beyond the original trio of Ninja, Kunoichi, and Kamaitachi, there are two new characters – Yaksha, a busty female cyborg with a snake-like blade arm, and Raiden, which is basically a giant mecha and even larger and more powerful than Ninja. These both need to be unlocked by beating the game, as they’re really meant for advanced players, but they give some extra reasons to replay the stages utilizing their new moves. There are eight levels in total – same as the SNES game, so nothing new – and while there’s a new Time Attack mode that lets you replay any level once you’ve beaten it, if you want to play the main story mode, you need to do it in one sitting.

Also newly added to this version is a two-player co-op mode, missing from the SNES version presumably due to technical restraints. However, its execution is rather puzzling, as both characters share the same life and power meter. On one hand, the SNES game was originally balanced for a single player, and having two of them would drastically lower the difficulty. But conversely, with the way it’s implemented here, it also requires that both players be roughly on the same level of skill, or else the weaker one will just get both of them killed. It’s also local only.

By default, the soundtrack is an arranged version of the SNES music, which remains mostly faithful while updating the synth. Also unlockable is the original arcade soundtrack, in case you want to ninja slash up baddies with the rocking sounds of Zuntata and the legendary tune “Daddy Mulk”, as well as the original SNES music. 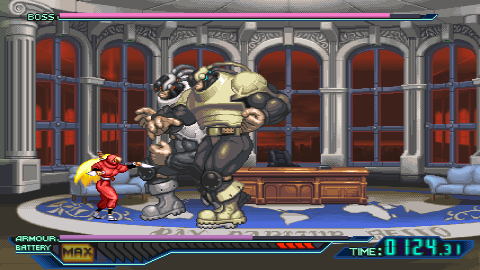 There are some other small things you can pick at in The Ninja Saviors. For example, the first level boss (and his recurring variations), who has now basically doubled in size, is far too difficult considering how early he appears, as you really need to learn to block and dodge to take him down, and none of the other enemies prove as troublesome. And while they were redoing spritework, perhaps they could’ve re-implemented the battle-damage aspect that was so cool in the arcade game but missing from the SNES one. But these are really only small bits of polish missing from what’s otherwise a fantastic update, that turns what was already a pretty good beat-em-up into an exemplary one. 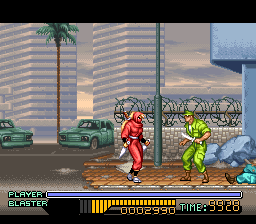 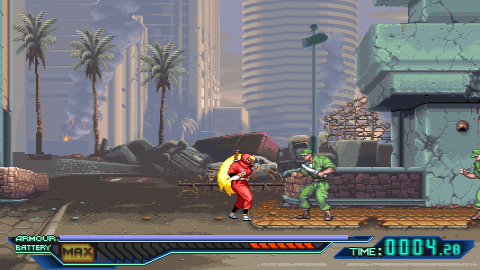 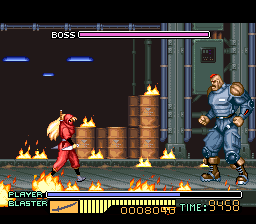 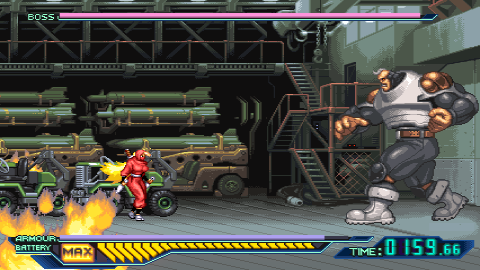