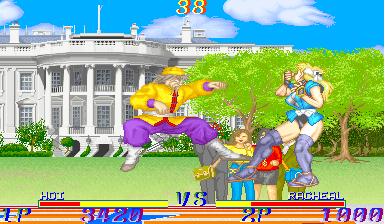 Fighting games in the nineties were as common as pennies in a mall fountain. Street Fighter II had been so influential and popular that any arcade developer worth their salt played follow-the-leader and tried to cash in on the craze. Perceived by some as a rival to Capcom in the arcade and console market, Konami helped to form the fighter genre but Capcom ultimately won out more with it, and Konami tried to make a more modern fighter to reclaim the torch they once carried. This led to Martial Champion, a fighter which looks damn nice even if it doesn’t do too much to shake up the formula. During production it was codenamed “Yie Ar Kung Fu II“.

The “hero” and obligatory shotoclone.

A tall Frenchman with a three-part staff.

An American ninja who predates Dead or Alive‘s Kasumi’s dislike of pants.

Basically Guile with an eyepatch and beret.

A steel-clawed jiang shi (or Chinese vampire, if you will)

An African tribesman with a spear. 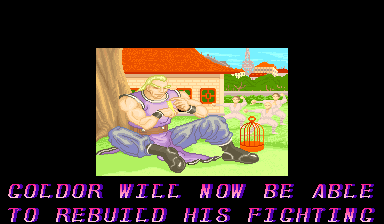 There’s absolutely no known story, just a good old fashioned fighting tournament where ten warriors converge to find out whose might is the truest. The names for Titi and Chaos were switched outside of Japan, so this gives us a seemingly sinister princess named Chaos and a bloodthirsty vampire dubiously named Titi. It’s probably due to how the name could be mispronounced in English (it’s “tee-tee”, of course), so maybe they figured it would be less apparent on a character that wasn’t a busty woman. Anyway, it’s not the most memorable roster of all time, but they’re at least notable for how gigantic their sprites are.

Perhaps biting from Art of Fighting‘s super large sprite style, characters stand taller than half the screen’s width and are decently animated. The major difference is that there is no screen scaling, so the view is rather cramped. Furthermore, the backgrounds are rich with color and active spectators with some pretty neat locations. Bobby’s stage is a naval cruiser with three gigantic cannons prominently staring into the camera, you fight Chaos in a creepy tomb with large dragon statues on either side, and Racheal appears to fight in front of the White House itself. Running on the same hardware that fueled Mystic Warriors and Violent Storm, you would expect Martial Champion to be a resplendent wealth of colorful design. However, it is a definite case of style over substance, as the gameplay is pretty barebones outside of a couple of innovations. One of these is that you only have three attack buttons, but they all correspond to being a high, medium, or low attack instead of being an attack of a specific strength. It’s a neat little quirk but can take a bit of practice to get used to. 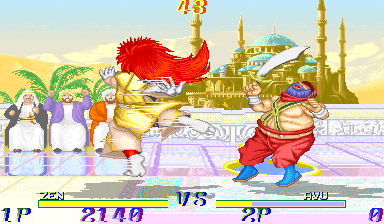 The other interesting factor is how some fighters have weapons, like Avu’s scimitar and Zen’s fan. This gives them additional range for most of their attacks, but if they are hit hard or thrown, they lose their weapon and the opposing character can pick it up provided they’re not armed. Martial Champion actually beats Samurai Shodown to the punch as a weapon-based fighter, though it’s a bit of a rough example as only half of the characters are armed. The weapon characters are riskier as while they generally have a bit more range and power, they’re at more of a disadvantage if disarmed. Certain characters, like Rachael, can also double jump. Otherwise, Martial Champion plays things quite straight and simple. All fighters have no more or less than two special attacks, back before it was required that every fighter except Guile had three or more.

It’s definitely not much for single play, as you only fight six opponents on an AI play, which must be a record low for arcade ladders. However, it’s still worth a play to see the sixth and final opponent, the unplayable Salamander. Salamander is actually a pretty interesting boss, and not just because his name is taken from Konami’s seminal Gradius spinoff. His gimmick is that he is able to use what seems like every single move in the game, a feature that was once considered for Rugal Bernstein of King of Fighters fame, but was ultimately cut due to time and memory constraints. Salamander has a much easier burden as there are only twenty special moves total instead of having about one hundred to replicate, though he does seem to greatly prefer some attacks over others, especially Mahamba’s aerial diving attack. Regardless, he’s a pretty impressive boss that isn’t too horribly cheap compared to other final fighters. 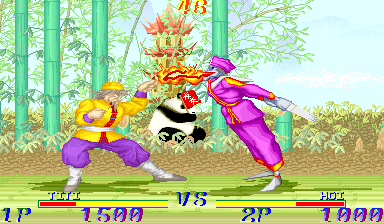 Of course, interesting bosses and fantastic graphics do not always a good fighter make, but it doesn’t play too bad. It just doesn’t play particularly memorably either, but Martial Champion did the best it could for what it was. To credit, it was released before Super Street Fighter II implemented official combo counters, Fatal Fury Special popularized super moves, and Samurai Shodown revolved around weapon fighting. Yet it just still felt like those other 2D fighters of the time had more character and fluidity to offer, so Konami’s leader follower failed to cling onto the coattails for very long. 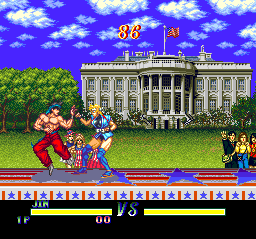 The only home port was released solely in Japan for the PC Engine Super CD, but it’s quite an inferior translation like the infamous Fighting Street. The action doesn’t feel as smooth, and there aren’t any animated spectators in the backgrounds anymore. The character sprites have also been massively scaled down, and while the action feels less cramped as a result, they also feel way too small. However, there are added supermoves, which can be executed when you’re low on life. There is also redbook enhanced music, but none of the tunes are all that memorable, and while there is a group battle mode, it’s not worth bothering with just for an extra pleasantry. 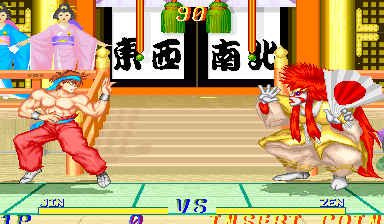 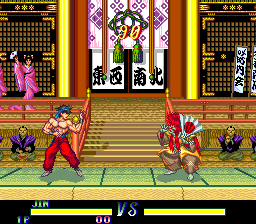