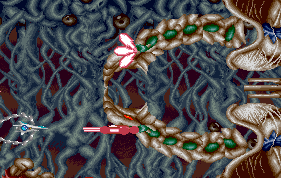 X-Multiply begins with the close-up of a human face, its dead eyes staring in a disturbed, halfway psychotic state. Then cysts begin to bubble, eventually floating to the top of the screen to form a spinning infinity sign, spelling out the game’s title. It sets the tone for an unsettling, incredibly creepy shooter, one that’s clearly borne from the company’s more well-known R-Type series, but manages to branch off in its own direction. The title is probably based on the album X∞Multiplies by Yellow Magic Orchestra. 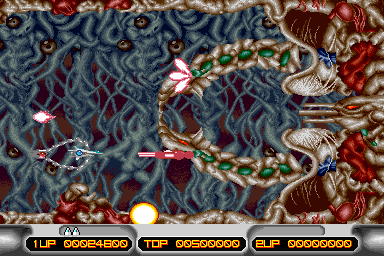 The enemies of X-Multiply are alien parasites, who have infected and taken over the body of a human host. The only way to destroy it is by miniaturizing a space craft, the X-002, and injecting it into the body, in a scenario vaguely similar to The Incredible Voyage. 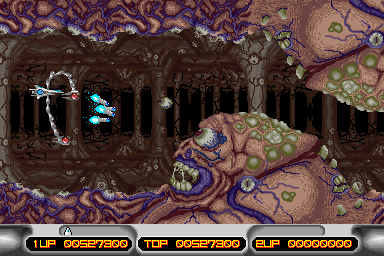 The concept of flying through a living being was not a new one, even when X-Multiply was released in 1989. Konami’s Life Force had a similar setup, though it was half-assed in execution, considering they merely redrew areas from Salamander to give it a biological theme. Natsume’s Abadox is similar, though the restrictions of the NES prevented the details from becoming too grotesque. Even R-Type had its fair share of biological horrors, though it was meshed with typical outer space sci-fi designs. 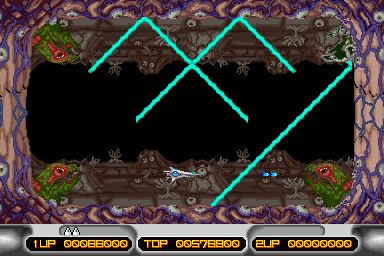 Where X-Multiply differs from these is that it’s a much darker, more horrific experience. The color palette is more oppressive, and even though you’re ostensibly flying through a human body, there’s rarely any sense that you’re passing through arteries, intestines, or other organs. (One exception: part of an area takes place with villi in the background.) 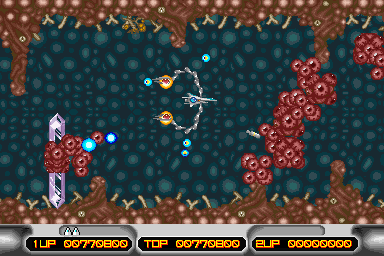 The enemy designs take its fair share from H.R. Giger, as with pretty much every other similar game of the era, but its influence doesn’t overshadow the game either. In the second stage, you fight against a monstrous “battle ship” similar to the third stage of R-Type, which possesses fish-like The final enemy is a resting goat-like creature, recalling images of Baphomet. Some of the bosses, like the first level boss Hastur and the final boss Byakhee, are named after creatures from the Cthulhu mythos, though the credits spell them wrong. 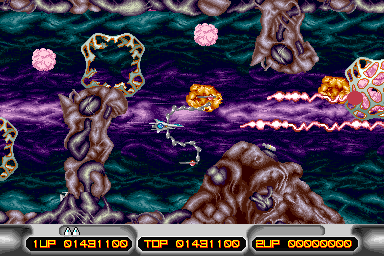 Irem’s graphic artists around this time were second to none, and X-Multiply exemplifies this talent as well as any of their titles. Their musicians were often just as excellent, even though they rarely seem to get the credit they deserve. The soundtrack is moody, with its FM synth a perfect accompaniment to the unsettling atmosphere, while avoiding some of the chirpiness that plagued the R-Type titles of the time. Its best usage is in the sixth stage – halfway through, the background goes fully dark, the scrolling moves downward, and the melody fades away, almost completely silent except for some creeping percussion. Rarely has any shooter soundtrack been perfectly timed for such suspenseful purposes. 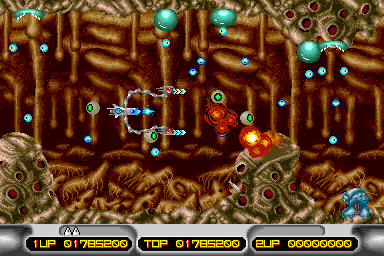 These aesthetic qualities would only go so far if the game itself were lacking, but that is thankfully not a problem here. Irem’s shooters typically possess interesting gimmicks that set them apart from the pack. In X-Multiply, your ship grows a pair of tentacles, which stick out from its top and bottom. They fire projectiles, along with the main fighter, essentially tripling your fire power. More importantly, they act as one of the most powerful weapons in the game, since they can inflict damage as well as absorb most projectiles. 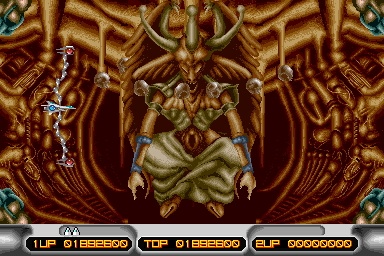 By default, the tentacles expand outwards, parallel to your ship, spreading out your fire. Move forwards and they’ll tighten together, protecting the rear of the ship. Move backwards, and it’ll protect the front. Both formations will concentrate your fire forward. 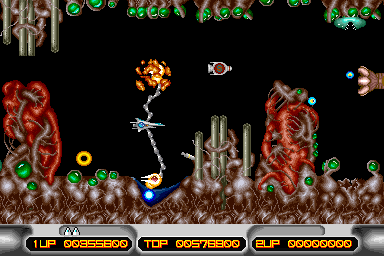 Despite its conceptual similarities, the tentacles are substantially different from the Force pods of R-Type. The moment you stop moving, the tentacles will slowly float back towards the center, so you need to be in continuous motion to use it as a shield. By pressing back and forth in an alternating manner, it will sweep backwards and forwards, a maneuver that, if timed well, will soak up any bullets that come near. Being able to manage the motion of the tentacles without crashing is one of the key strategies of the game. Additionally, compared to the Force pods, their range is pretty short, so you need to get up close in order for them to be effective. 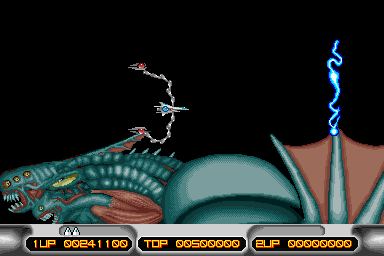 Like other Irem shooters, it’s fairly difficult – a single hit kills you, there are no shields, and a death will send you back to an earlier checkpoint. But while you still need to have a good grasp on level layouts and boss attack patterns, it’s less reliant on memorization than a typical R-Type game. Since the tentacles are a versatile defense, there’s also a greater concentration of bullets and projectiles, which quickens the pace.

X-Multiply was released in the same year as R-Type II, and while that was essentially just a less inspired sequel, X-Multiply brings more interesting and refined elements to the table. It’s an excellent shooter that remained tragically obscure, mostly due to it not being ported to any home platforms at the time. It remained arcade exclusive until 1998, when it was bundled along with Irem’s Image Fight as part of the Arcade Gears series, a series of arcade ports for the PlayStation and Saturn released by Xing. 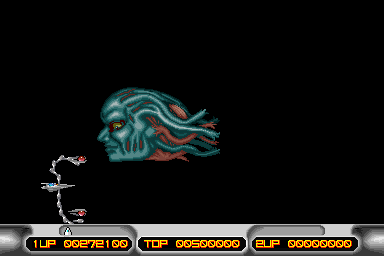 The game is practically a perfect port, with a few added niceties, like a difficulty select, rapid fire, and a few cheat codes. There are a few glitches, as the game occasionally drops sound effects. All of the music is encoded as redbook audio, so it works in any CD player. The status bar also doesn’t completely fit, so you need to use the trigger buttons to reveal or hide it. The PS1 version has identical horizontal resolution to the arcade version, while the Saturn is smaller (384 pixels vs 352 pixels) but the difference is negligible.

R-Type Final, released for the PlayStation 2 in 2002, featured a number of ships based on their older games. The craft RX-12 Cross the Rubicon is meant to be the predecessor of the X-002 in X-Multiply. It doesn’t quite look the same, but it uses the tentacles as its Force pod, and its weapons are similar. 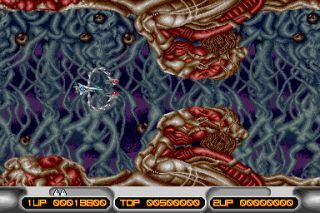 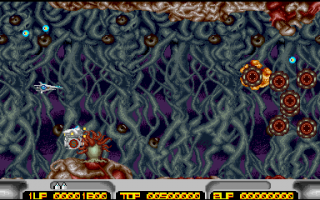 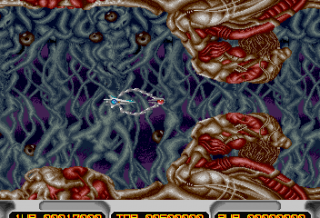