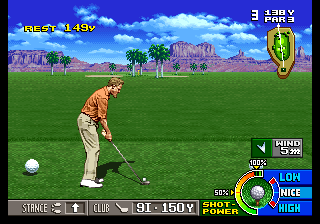 Golf is a sport that is very difficult to get people excited about. There are people who enjoy it, but those people are probably already familiar with the intricacies of the game, and could understand why the word “Albatross” would result in spectators going nuts. Going along with this, video game golf does end up being relegated to those who already understand real golf, with many golf simulations asking their players to spend minutes simply lining up a shot, or figure out the elevation of the green and how their next putt might get affected by it.

As a result, many golf games may tend to get passed over as too “boring” for most video gamers. Of course, nowadays there are golf games for more casual players, like Mario Golf, Pangya / Albatross 18, and Hot Shots Golf / Everybody’s Golf, but before those had the chance to reach gamers, SNK and Nazca gave arcade golf a try.

One wouldn’t think that golf is the kind of fast-paced sport that would make an exciting arcade game. Arcade games only tend to give around 5 minutes of play time from a single quarter, after all, and more advanced games like Links wouldn’t make for very good quarter-munchers, either. So Nazca, better known for Metal Slug, really had their work cut out for them. 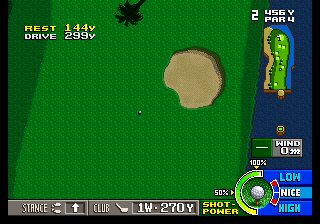 Neo Turf Masters (known in Japan as Big Tournament Golf) lets players choose from four different (fictional) courses in Japan, Germany, Australia and the United States, each of which have 18 unique holes. Of course, a game would be hard pressed to keep arcade players interested long enough to play all 18 holes in one session, so Nazca introduces a “lives” system. If you finish a hole with a Par, one “hole” is taken from your stock. If you finish with a Birdie or better, you get that hole back in your stock. If you get a Bogey or worse, however, you lose two holes from your stock, so bad golfers may find themselves facing the Continue screen quickly. By default, the game gives you 3 holes before asking you to insert another coin.

As far as the actual golfing goes, it’s actually quite a bit simplified compared to more contemporary golf titles like Links. For every shot, the game “auto-aims” your shot towards the flag, and you are able to adjust your aim left and right with the joystick. Unlike many PC golf games, the screen doesn’t need to be “redrawn” every time you adjust your aim, but rather pulls a strange parallaxing effect. The game also auto-selects your club based on the distance to the hole, and helpfully includes indicators on each club that tell you how far your shot will go at 100% swing (it is possible to swing higher than 100%, though, depending on your character, which we’ll get to in a bit). When putting, it’s even easier, since the swing meter has a helpful guideline on the gauge that indicates where precisely you need to press the button.

In a move that seems to stem from SNK’s fighting game pedigree, Neo Turf Masters offers six playable characters. Really, these characters are merely swaps of shirt colors and facial features (they all seem to have the same basic head, just with different hairstyles, glasses, beards, etc), since there isn’t any defined personality or even interaction between them. However, each character has a different set of stats that actually plays into how easy certain things are for the player. For example, Shot Maker has a high Accuracy stat, which makes his driving and putting gauges move much slower, while Power Golfer has the highest Driving stat, enabling him to hit the ball far beyond the 100% line on the driving gauge. Putt Master’s high Putting stat makes his putting gauge much more precise than other golfers, due to the squares that make up his gauge being quite a bit smaller, but all of his other stats are the lowest in the game, so his driving gauge will move much faster than everybody else’s. 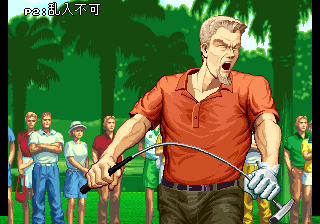 Of particular note is the way the game prevents you from using stronger clubs on bad lies. While you could theoretically try to hit your ball out of a sand trap using a 1 Wood, the High/Low gauge (the second part of the driving gauge) is almost entirely red. If you accidentally stop the High/Low gauge in a red zone, your golfer swings and misses the ball entirely, requiring you to swing again, and (in a particularly nasty move) adds one stroke to your total. With a more accurate golfer (Technician is particularly good at this, since his Accuracy stat is the highest), it’s much easier to hit the one-pixel dead center of the High/Low gauge, so particularly skilled players may be capable of outrageous feats by using clubs far stronger than typically possible.

The ways Neo Turf Masters has been designed and optimized for the arcade experience are quite numerous. While there are countdown timers everywhere to help speed players along, most of the game’s fast pace is attributed to the little stuff – the ball flies much, much faster than in other golf games, and the game spends much less time dwelling on the ball’s lie afterwards. When on the green, the ball moves quick and stops quickly as well. Most of the pleasantries, like the scorecard between rounds, can be skipped. Overall, a skilled player could probably knock out all 18 holes of a given course in 30 minutes, assuming they either do well enough at keeping under par, or feed the game enough quarters to keep going. 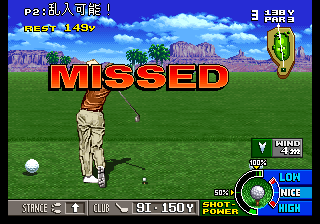 Though you’re technically just golfing by yourself (in that you don’t get to watch the other players play their shots), you get a tournament score card between holes that shows how the other players are doing. It’s really just an incentive to play well, since these other players seem to be randomly generated.

The dev team at Nazca have also tried other ways to keep the game exciting. The graphics are bright, bold, and sharp; the golfer animations are large on screen and very smooth due to a motion capturing method also used in Art of Fighting 3, and the music would not be out of place in a Metal Slug game, though it is quite a bit less hectic and more peaceful. (It should be noted that, since it is Nazca, the instrument set is the same between this game and Metal Slug, a feature quite evident in the USA course’s music). Also, the results of each hole are shown with the golfer taking on various poses depending on how well they did, with one particularly amusing shot only appearing if you’ve scored a Triple Bogey, or had to give up the hole entirely, where your golfer is mad enough to bend their putter (this is the same pose for all six golfers – as previously stated, they all have the same body, just different colored shirts and different heads).

As ought to be expected of most Neo Geo games, this game had a version for Neo Geo CD. In addition to the heavy load times that are typical of SNK’s CD-based games, Neo Turf Masters does offer a nice arranged version of the already excellent soundtrack. No obvious cuts have had to be made, but the game does need to load every individual hole (thankfully not every shot). Nice additions over the arcade version include a name registration system, where you can keep track of your stats, and Grand Slam mode, where you can play through all four courses in a huge tournament. Strangely, the AES cartridge release doesn’t feature any of these, just an in-game difficulty switch. 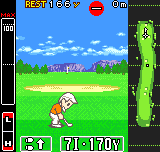 At the launch of SNK’s Neo Geo Pocket Color, there was a port of Neo Turf Masters. It includes only three of the four courses (Australia is missing), and as is typical of SNK’s Neo Geo Pocket ports, the graphics have been restyled into super-deformed versions. Outside of that, though, the game plays near identically to the Neo Geo original, besides that the continue system has been removed, and a suspend-save system added in its place. The standard Stroke Play mode does away with the computer opponents and just lets you golf in peace, while Triple Crown mode works about like the arcade version.

Overall, Neo Turf Masters hits every mark as far as making a game that is interesting and engrossing, even if you’re not a fan of golf to begin with. 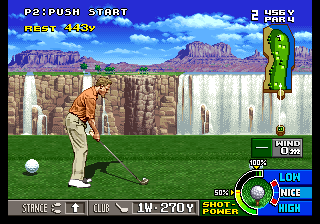 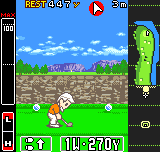 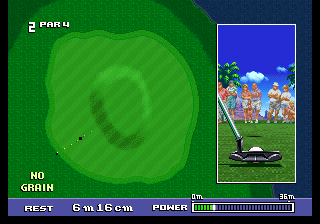 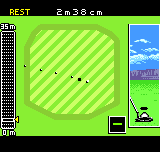