Irem was typically known for dark shoot-em-ups, ranging from the biomechanical Giger-esque designs of R-Type and X-Multiply, the dark fantasy of Dragon Breed, or the military sci-fi setting of Air Duel. Mystic Riders is a departure from all of this, focusing on two broom riding magicians, set in a fantasy world. It was not developed by Irem’s regular shoot-em-up team, but rather by some of the folks who had previously worked on Daiku no Gen-san (AKA Hammerin’ Harry), which was also more comical in tone. The Japanese title, Mahou Keibitai Gun Houki, means “Magic Defense Force Gun Broom”. 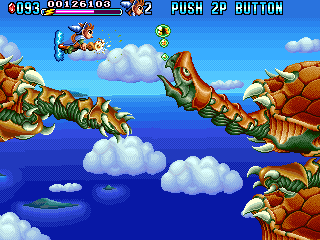 The game offers two player simultaneous play, taking on the roles of two young broom riding witches – Mark, the blue guy, and Zeal, the red girl. By default, you start with the fire magic, which can be charged up a la R-Type. Defeated enemies drop jewels, occasionally in ornate patterns, which will upgrade your weapon (and provide an end-of-level scoring bonus). Grabbing enough will increase your weapon level, which will let you charge your magic even higher for stronger attacks. The fire magic works like an explosive, spreading outwards when it hits a target and inflicting extra damage. You can also switch to lightning magic by grabbing power-ups, which is less powerful but more versatile, as it shoots upwards and downwards, and travels along the scenery.

Much like R-Type‘s Force pod and X-Multiply‘s tentacles, Mystic Riders‘ main gimmick is your broom. The secondary button is devoted to flinging your broom across the screen, which can be aimed in eight directions by pulling away from where you want to throw it. The broom is devastatingly powerful, as it not only hits multiple times but can also nullify enemy fire. By wiggling the joystick up and down, you can also enter a spin maneuver, which makes you temporarily invincible. It only lasts for about a second, plus there’s a very brief cooldown period afterward. It’s also rather risky to execute, because if you aren’t quick enough or blunder into enemy fire before you pull it off, you’ll end up getting killed. Still, it’s extremely powerful from both an offense and a defense perspective. 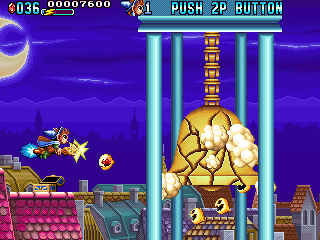 Because of your broom powers, and the fact that you resurrect immediately where you left off when you die, Mystic Riders is definitely easier than a typical Irem shooter. That doesn’t mean it’s a cakewalk, but rather when one considers the extremely high challenge that, for example, R-Type presents, Mystic Riders takes the notch down from “hair pullingly difficult” to “challenging but manageable”. The game also isn’t quite as reliant on memorization, and in fact there are some random aspects to the enemies, which especially become more noticeable on the second loop. Plus, even though you can lose weapon levels if you get killed, the basic weapon is still decently powered, and you can always use your broom abilities, which is your most powerful attack anyway.

The fantasy-influenced visual style also differs from the usual Irem shooter. That being said, despite starring broom-riding witches, it’s not really a “cute-em-up” in the same that, say, Magical Chase or TwinBee are. There are certainly more lighthearted aspects, like the evil black cats in the first stage, or the fireworks in the background that explode in the image of the main characters. But then there are enemies like a grim reaper, whose decapitated head begins attacking you, leaving a visible stump on its body. Later enemies include gigantic skeletons and some other relatively gruesome designs that subvert some of the usual light-hearted fantasy tropes. It’s here where Irem’s always talented pixel artists fulfill their consistently high level of quality, especially with the army of flying dragon-turtles in the third stage, which replace the usual armada of battleships seen in other shooters. In this way, Mystic Riders is most closely comparable to Success’ Cotton, which was released a year prior in 1991. It also has a slightly darker than usual theme for a cute-em-up (something its sequels toned down a bit), both inspired by Halloween, but when pitted against each other Mystic Riders is a much more unique, well developed game. 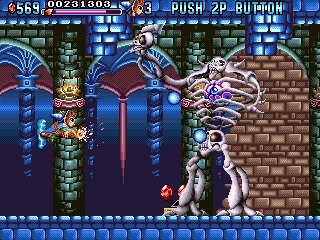 The only area where Mystic Riders doesn’t quite stack up is the soundtrack. The FM synth on Irem’s arcade boards were well suited to the type of anxiety-inducing moodiness of their other games, but the light-hearted tracks in here just feel inconsequential.

Mystic Riders is often overlooked compared to other Irem shooters, probably because it was never ported, outside of emulations released on Windows in the Irem Arcade Hits bundle. Its outwardly childish aesthetics might suggest a lesser game than its brethren, but it’s as solidly designed as any of them. It’s also good anyone who likes the idea of Irem shooters, both artistically and mechanically, but isn’t a fan of the intense devotion they require.