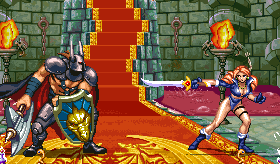 With the looming release of the 32-bit Saturn, Sega fans were expecting a new Golden Axe game with even better graphics, or at least a port of The Revenge of Death Adder. Instead, Sega released Golden Axe: The Duel, a 2D versus fighter featuring some of the characters and themes from the earlier beat-em-ups. 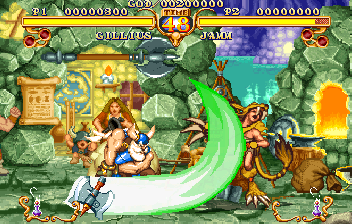 The character selection is an odd one. You don’t actually get to play as the protagonists from the old Golden Axe games, instead you get to play as their relatives or one of their descendants. There are ten fighters altogether. The hero is ostensibly Kain Blade, a standard barbarian and a descendant of Stern Blade from The Revenge of Death Adder. Meanwhile, Milan Flare is a female warrior who’s the relative of Tyris Flare from the first Golden Axe. And Gilius Rockhead is an axewielding dwarf who comes from the same tribe as Gilius Thunderhead from the original. 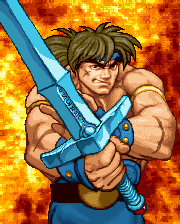 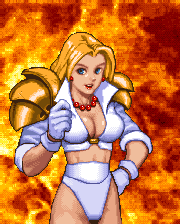 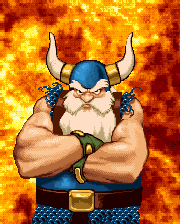 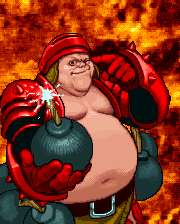 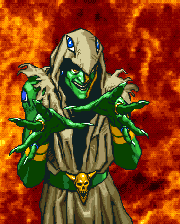 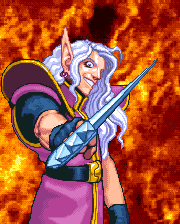 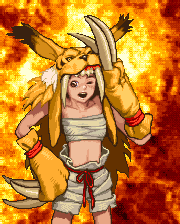 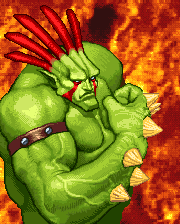 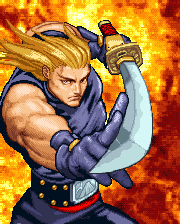 The rest of the cast is generally rather boring too. Zoma is a creepy green-skinned wizard, and Keel is a wizard thief who kills passersby when they come near the land where he lives. Jamm is a girl who was apparently raised in the wilderness by a beast spirit, and attacks with her giant claws. Green is the last of a race that’s part plant and animal, and plays like your typical heavyweight. Panchos is an inventor who is looking for the Golden Axe for unexplained reasons. He is a typical heavyweight and fights with bombs, and seems to be vaguely patterned after the laughing bald fat dudes from the first Golden Axe. Finally Doc is a ninja with a katana, who seems a little out of place compared to the rest of the barbarian tropes. 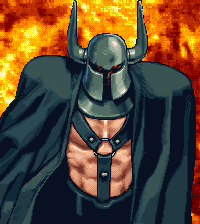 The coolest aspect is the chance to play as Death Adder. He’s bad and he’s back as one of the better characters, mostly due to the long range of his axe. He also has a fire breathing shield which will shatter if it takes too many hits. 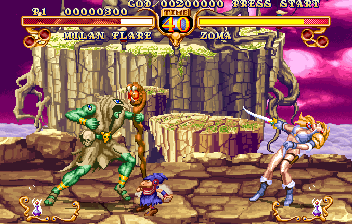 The action is fairly typical of versus fighters and it uses a six-button setup similar to Street Fighter II. This being a weapon-based fighter, one might be apt to compare it to Samurai Shodown, especially since it uses a similar zooming camera. But it’s actually pretty fast paced, and it’s much closer to being “Street Fighter Alpha with swords”. The gimmick here is that thieves periodically run around the arena, much like the older games. Hitting thieves will cause them to drop magic potions – once your magic meter is maxed out, you can enter a “super” mode, buffing your strength and allowing you to execute your character’s special move for a limited amount of time. Contrary to their name, these moves aren’t actually anything special and pale when compared to the awesome screen-clearing magic spells of the older games. Little green dwarves will also produce legs of meat, which will heal you a bit. The computer AI for the single-player mode is unfortunately quite obnoxious, even on the easiest difficulty setting.

The art is brighter than the previous games, and looks like a cross between Conan and anime. The backgrounds occasionally have some interesting details – Gilius’ stage has singing dwarfs, Panchos’ stage has a robot that is ironing some clothes, and Doc’s stage has one of those bird-like Bizarrians in the background. The music is generally pretty awful and completely forgettable, while the announcer sounds like Sega hired the same lousy voiceover guy from Super Street Fighter II. 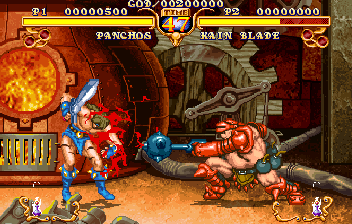 Overall, it’s not a complete disaster – it’s just that it was designed like Street Fighter II or Power Instinct, when at the time people wanted something more. It didn’t help that it’s completely generic compared to the harder hitters from SNK and Capcom. Furthermore, it alienated Golden Axe fans, who just wanted another beat-em-up, so it pleased no one and failed big time. As such, it’s often regarded as Sega’s short-sighted attempt to cash in on the Street Fighter craze using a classic property. 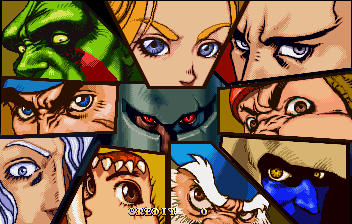 Given that the arcade version ran on the ST-V hardware, the Saturn version is, for all intents and purposes, identical. There are some load times but it has enhanced music – pretty typical of Saturn releases. It was also one of the few titles that received a domestic release in North America before the Saturn died. Just note that it doesn’t work at all with the analog controller – it won’t even boot up.