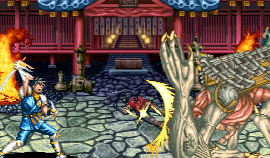 The “boss-rush” fighting game never took off as a genre, but while Monster Maulers and Warzard garnered something of a cult following, Banpresto’s Metamoqester fell through the cracks. A shame really, because its intense gameplay and colorful characters can make for a fun experience. 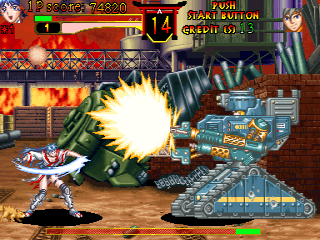 Grotesque monsters are popping up all over the world and it’s up to three warriors to globetrot and take them down. However, the warriors are not entirely what they seem since when using certain special attacks, they will change into their demonic forms. Being a spinoff from Pandora Box’s Oni RPG series, Metamoqester ironically doesn’t have much of a story. 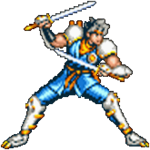 Tenchimaru – A duel-sword wielding ninja who is the most balanced of the three, and the only one who has a special projectile move. He’s the sole character to be carried over from the main Oni series. 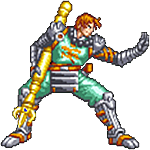 Kaiohmaru – A hulking monk who attacks with a trident and energy pistol. His moves have the worst start-up time, but with patience and timing, he can destroy almost any boss with three or four special attacks. 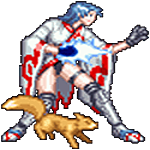 Yukihime – A nimble priestess whose spinning attacks have some almost-ridiculous invincibility frames on them. Her pet fox accompanies her in battle, but doesn’t do more than bristle at her enemies (Poppy would be ashamed). With her speed, good pokes, nigh-invulnerability, and overall fan service-y presentation, it’s little wonder why she’s the most popular among players. 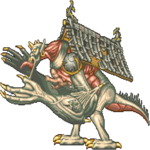 Gengoroh – A fire-breathing demon with a pagoda roof on its back and a baby (?) coming out of its chest. Its stage is a desecrated temple in Japan. 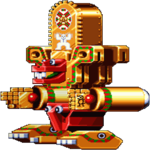 Titicata – An Incan robot that seems to be a predecessor of Warzard’s Gi Gi. One of the more visually impressive monsters, it uses solely melee attacks and is pretty easily dispatched. 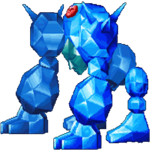 Icebiter – A giant ice monster found the in the Antarctic, appropriately enough. Its stage is a giant ice float where a huge minotaur encased in gold watches from the background. Icebiter is a very challenging and annoying boss, since it has an icicle attack that can do big damage (even when blocked) and a cross-up body splash that can mess with a character’s defensive techniques. 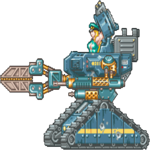 Brocken – A German tank mecha piloted by a young blonde woman. When her health gets to about half, she’ll spam her multi-directional machine gun attack. 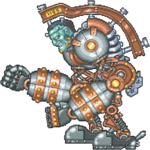 Victle – A surprisingly agile steampunk golem resembling Frankenstein’s monster. It apparently doubles as a clock since it uses an automaton cuckoo bird as a melee attack. Its stage is a lab in Britain. 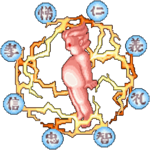 Husehime – The source of all the world’s monster attacks:  a giant floating baby with spiky hair. That sounds about right. Being the final boss, its electrical attacks and screen-wide laser show will make quick work of anyone not playing defensively. 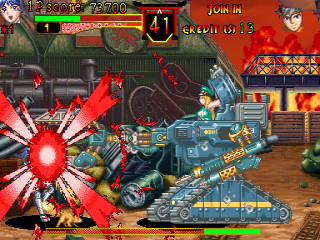 The controls are pretty straightforward. There are three buttons for melee attacks (weak, medium, and strong) and one for a projectile. Special moves are done using the standard fighting game motions with the joystick and then tapping the right button. Simultaneously holding down the weak and medium attack buttons will charge the super meter (located under the health bar) up to three levels. Once at any of those levels, pressing the medium and strong buttons together will activate the characters’ super move, which sees them temporarily change into their demon form and unleash a screen-wide attack.

Metamoqester has strong graphics and boasts some pretty impressive 3-D effects for its day. Titicaca is especially cool to look at when it moves around and breaks apart. When it comes to the stages, most of them are pretty dark and gloomy, with corpses littering and fires flickering in the background. The game seems to go out of its way to not mimic Monster Maulers’ light-hearted approach to design. The monster and stage designer, Takehiko Hoashi, would later go on to work as a visual effects artist on Final Fantasy IX and two of the short films (“The Duel” and “The Package”) from Halo Legends. 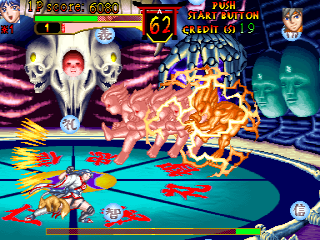 The game has a pretty high difficulty. The characters have some degree of lag time on most of their moves, but the monsters don’t seem to have any issue connecting with their hits almost instantly. In addition to that, all of the monsters are crazy strong so it’s not uncommon for a fight to end in only a few hits. The kicker is that, unlike Monster Maulers and Warzard, the monsters’ life completely refills when a new round starts. So while Metamoqester is a pretty short game that allows two lives per credit, the difficulty can really stretch things out.

The camera certainly doesn’t make things any easier. With almost every hit, the screen will shake violently and can be pretty disorienting (especially in coop mode). Blocking Icebiter’s icicle wave attack seems to last forever and makes the screen bounce so much that it can get infuriating. 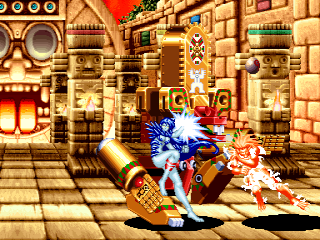 Gameplay stresses defense and timing, otherwise the player may just as well throw their quarters in the air. The developers have implemented a few defensive techniques like an evasive roll and an invincible backdash to further help players out. The coop feature (or “Co-Fight” as the Japanese version calls it) where two characters can team up against the monsters takes the edge off as well. Unfortunately, there are no special double team attacks like in Monster Maulers.

Metamoqester was originally released in Japan in November 1995 as the pronounceable Oni – The Ninja Master. It’s understandable why the developers would want the name changed for the (very limited) international release since the Oni series isn’t very well known outside of Japan, but why/how they came up with the name they did is still a mystery. This version has a spoken narration over part of the attract mode and the characters have text quotes after each fight and during their respective endings. Other than that, the game is practically the same. 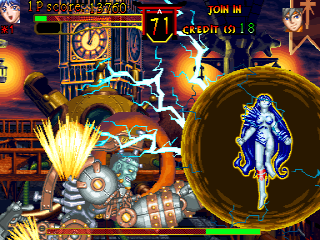 So while Metamoqester isn’t as over-the-top as Monster Maulers or as deep as Warzard, it’s certainly worth seeking out. It won’t be a cakewalk, but traveling all over the world killing giant monsters typically isn’t.

The Oni Series:
The Oni games are a series of JRPGs that began in 1990 with the release of Devil’s Demon Record ONI (鬼忍降魔録 ONI) for the Game Boy. The overall idea was inspired by the Kamen Rider TV show where a noble warrior must transform into something stronger to fight evil, although it is set in feudal Japan instead of a more modern time. Tenchimaru appears in several of the games, as do many of his relatives and descendants, as either a main character or in a supporting role. Oni was quite popular in Japan for a while with later games being released on the Super Famicon, PlayStation and Nintendo DS. It even spawned a novelization and an anime series in the late ‘90s. There’s very little if any overlap with Metamoqester and none of the arcade game’s developmental team worked on the main Oni series.