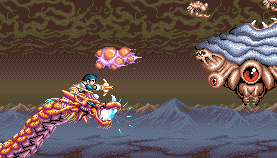 When one gets right down to it, video games are all about managing vulnerabilities, protecting oneself against damage while still remaining on the offense. Traditionally in the shoot-em-up genre (or most genres, really), your entire physical body is the point of damage, to be protected at all costs. Irem’s seminal 1987 shooter R-Type played around with this concept with the Force pod, a movable piece of equipment that was always, always invincible to enemy fire. It could be used to protect the player from enemy bullets, it could be used as a battering ram against weaker enemies, or could even be propelled forward, essentially being the most powerful weapon in the game. 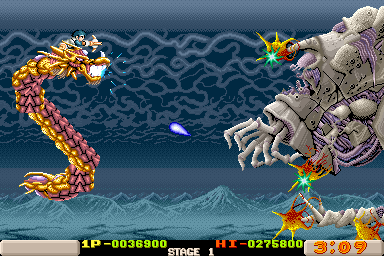 Dragon Breed, also developed by Irem and released in the arcades in 1989, develops this idea even further. The player is technically a human, who rides on top of a flying dragon called Bahamoot. The dragon is invincible. The human is not. The dragon consists of several multi-segmented sprites, similar to the Jaleco game Saint Dragon, released roughly around the same time. 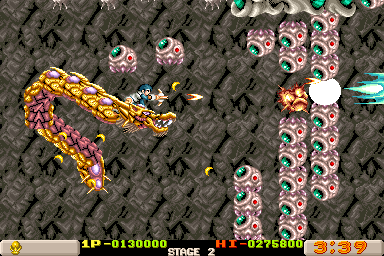 Each partner has their own weapon as well. The human attacks with a crossbow, which can be upgraded to a three-way shot. The dragon, whose mouth sits slightly below the crossbow, breathes fire, and can also fire a charge shot, again similar to R-Type. There are other assorted power-ups which grant the dragon additional powers, including a persistent short-range-but-high-power fire breath, homing missiles, the ability to shoot electricity downwards from its body, and little scales that act as boomerangs. That last weapon by itself is rather weak, but you can also wiggle the joystick and whip the dragon’s body around the human, protecting him from harm for a few seconds. 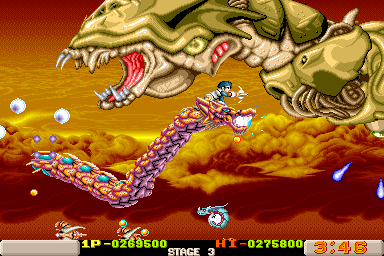 When presented with solid land, the human can also jump off the dragon and walk around independently, as the dragon hovers nearby. This action is often underutilized though, as it’s generally only done to grab power-ups or attack enemies that the dragon itself, due to its bulk, cannot reach. 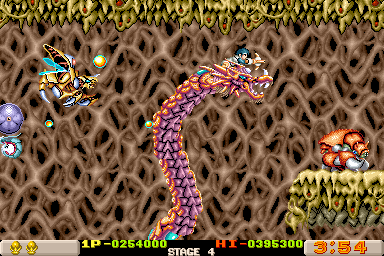 The number of offensive and defensive strategies present are astounding, but they also have a tendency to make the player feel more powerful than they really are. Players unfamiliar with the game will probably filled with moments of hubris, charging forward at enemies with abandon. After all, since the human rides on top of the dragon’s neck, that means the entire lower half of the craft is invincible. But the enemies are nasty, and always have a tendency to crowd in and attack from above. Compared to R-Type and other slower, side-scrolling shooters, the level design (with a few exceptions) is fairly sparse, filling the stages with more enemies than landscapes. The bosses are also quite large, and the screen ends up feeling quite claustrophobic, especially considering the size of the dragon. But, as ever, managing this tight situations is where Dragon Breed draws most of its challenge. 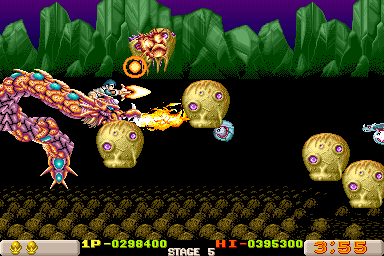 As it ends up, Dragon Breed, like most of Irem’s arcade games, is incredibly difficult. Each level only has a single midway checkpoint, and while the game’s six levels aren’t terribly long, it’s the sort of game where you need to be comfortable replaying the same segments multiple times, memorizing the best ways to deal with the situations. 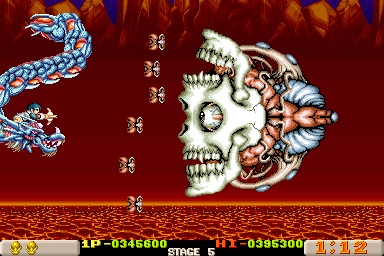 Of course, given that Irem had some of the most amazing pixel artists of the era, the visuals are incredible. The world of Dragon Breed is a post-apocalyptic dark fantasy, which features some of the same creepy biological monstrosities seem in R-Type and X-Multiply, yet still distinct enough to stand on its own. Its emphasis on insects can probably be traced back to Studio Ghibli’s Nausicaä, though far, far more grim. There’s a fossil of something resembling an Ohmu in the first stage, though there are no living ones found in the game. 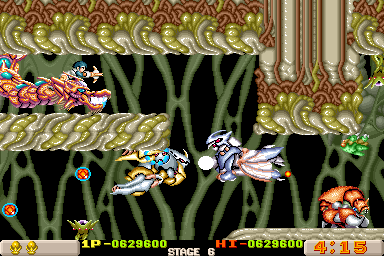 Irem’s musicians had talent equaling their graphic artists, pulling off some fantastic music on the M72/M81 hardware FM synth. While some of the themes, particularly the boss track, are a little too dissonant, the first stage music kicks the game into high gear almost immediately, and rarely lets up in intensity, even when other parts of the soundtrack slow down into a creepier groove. 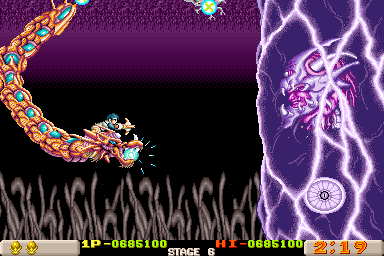 Despite their high quality output, few of Irem’s arcade games were ported to home consoles, and Dragon Breed was one of many to fall through the cracks. Assorted Japanese magazines of the era indicated a PC Engine version was in development, but never saw the light of day. Still, the game managed to be converted to assorted European computers, published by Activision. In general, despite some quirks, all of the ports are relatively decent considering their hardware. 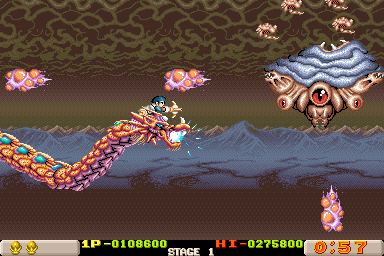 The Amiga and Atari ST versions, ported by Arc Developments, are both quite decent, with excellent graphics that closely replicates the look and feel of the arcade version. The music is generally excellent too, with the Amiga version particularly benefiting from the sampled instruments over the FM synth of the original version. However, you have to choose between sound effects or music. However, these versions also have some issues with the collision detection. In the arcade game, if your dragon brushed up against a strong enemy, it would inflict minor damage and bump them back a bit, effectively keeping the rider safe. This does not happen in these ports, making it far easier for the enemies to penetrate your defenses, making for an even more difficult experience. 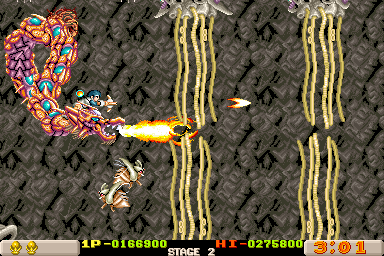 The Commodore 64 version, developed by Digital Design, isn’t up to the same level, of course, with substantially worse graphics and slower gameplay, plus persistent flicker on the body of the dragon. The collision detection is also fairly glitchy, though it actually makes the game somewhat easier. Despite some of its issues, taken on its own terms, the level designs are faithful, and it’s still quite playable. However, again, the music is solid, and even slightly better than the Amiga port. All of these computer versions were composed by Martin Walker, with the Amiga and Atari ST versions having a new title screen theme.

The Amstrad and ZX Spectrum versions are basically identical. The sprites, despite their low color, look decent, and unlike the Commodore 64 port, the dragon body doesn’t flicker. They even run slightly faster, in spite of the choppy scrolling. However, the backgrounds are stripped down drastically, so each level now appears to take place in outer space, against a scrolling starry field. There is no music either.

Dragon Breed was featured on Dotemu’s Irem Arcade Hits compilation, released for Windows PCs in 2010. It’s a straight emulation, and unfortunately the quality isn’t quite as good as MAME, mostly because the sound is a bit off. Still, it’s the only legal way to play the game, so it’s worth supporting. 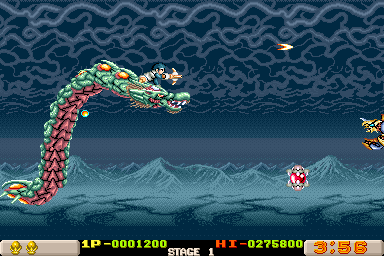 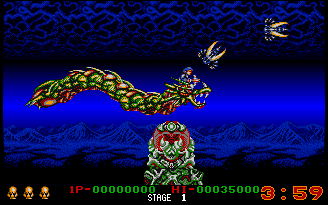 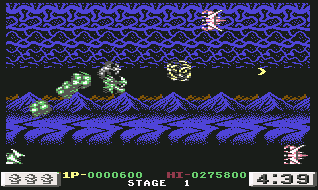 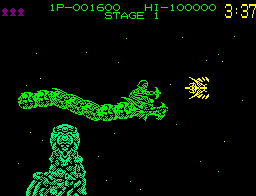 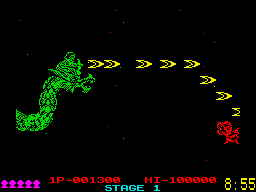