Rolling Thunder 2 takes the series out of the 60s and into the modern era, with a style that more closely apes the latter day James Bond flicks. The enemy this time is an organization named Gimdo, who is using old technology from Geldra in order to take over the world. Instead of taking place solely in a generic underground base, there are two locales – the first half of the game takes place in a fancy tropical villa, and the second takes place in Egypt. As you progress through each stage, you slowly work through the façade and into the underground lairs, with scenery more typical of the original game, though with upgraded graphics. 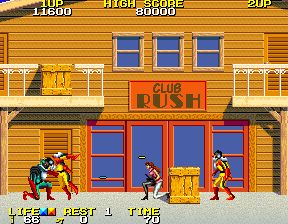 One of the biggest draws is the two-player mode. The heroes are named Albatross and Leila, though due to the time jump between this and the first Rolling Thunder, they’re obviously different characters who inherited the codenames of their predecessors. Considering that the female character was just a damsel-in-distress in the previous game, it’s cool to see the lady here take on a more active role. 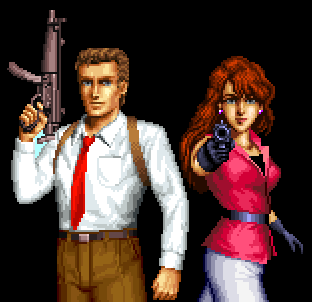 The core of the game hasn’t changed much, beyond the expanded scenery. The game is still very difficult, but the biggest concession is that you no longer take damage simply from bumping into an enemy. You will, of course, take a point of damage if they manage to punch you. In the early stages of the game, this greater defensive capability makes dealing with the floods of enemies a little easier. However, once the game introduces enemies that can fire while ducking, then the difficulty shoots way up. There are a couple of new enemies, like foes with glowing shields that can only be hit from the back, and bad guys that attack with bubbles.

The graphics are, of course, a huge step above the original game, as it runs on the 16-bit Namco System 2 hardware. The soundtrack is much better too, with a number of tracks composed by Ayako Saso, who later worked on assorted Ridge Racer and Tekken games. The arcade soundtrack album features a number of unused songs, which were repurposed for the console release. 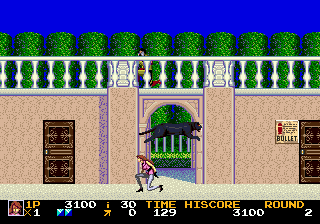 Namco was partial to Sega in the 16-bit era, so Rolling Thunder 2 ended up getting ported to the Genesis. While it suffers from the usual hit in graphics due to the limited color palette of Sega’s system, it’s otherwise an excellent translation. There are three new stages which feature some additional enemies, including the return of the panthers from the original game. A few areas feature enclaves in the background where you can duck into and engage other enemies in intense cover-fire standoffs. The new levels also feature brief boss encounters – the arcade game only had a lone encounter with the final boss – as well as a couple of new weapons, the laser and the flame thrower. It’s also more generous with hidden bonus items, including time extensions, extra lives, and even health meter extensions. 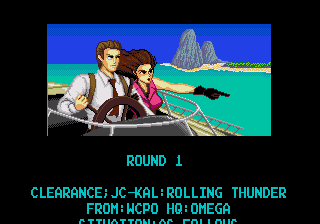 There are also small storyline scenes between the stages. The arcade version seemed unfinished at times, especially at the end of the fourth stage, where you suddenly when from an underwater base to the deserts of Egypt. At least this version shows the villain escaping on a submarine.

The Genesis version features an amusing password system, wherein seemingly random words are strung together to create nonsensically amusing phrases, sort of like code words. With eleven levels in the Genesis version, it’s certainly a meaty game, and being able to resume progress makes a difficult game less overwhelming. It also has one of the most puzzling sound tests in existence, where an alien band jams to your chosen song. 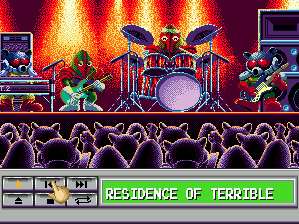 The arcade original has been omitted from most Namco classics compilation. The Genesis version is available on the Wii Virtual Console. The arcade version is also on the Wii Virtual Console, but only in Japan. Unfortunately this release is pretty bad, with fuzzy, resized visuals. It was, however, included on the Namco Museum collection for the Switch. Even though there’s an English version of the arcade game, this release opts to use the Japanese version and instead use windows to overlay English writing over the Japanese text. 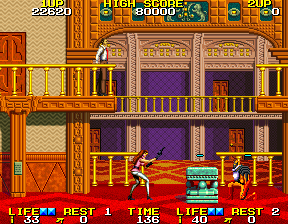 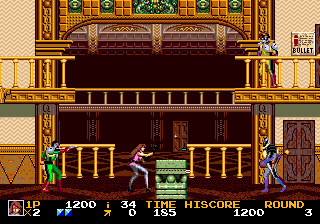