Hot-B was one of those really odd game companies that never really hit the big time. You could say they were a “B-list” developer if you wanted to be cheeky about it. Considering they made Hoshi wo Miru Hito, one of the worst games of all time, maybe that reputation is deserved. On the other hand, they were behind The Black Bass, a fairly well-received fishing game series, and they also made Steel Empire, one of the greatest shoot-em-ups on the Genesis. Steel Empire‘s steampunk design and balanced gameplay made it popular enough to be remade twice over on the GBA and 3DS, so they certainly had potential as a shooter maker and should have made more than they did. 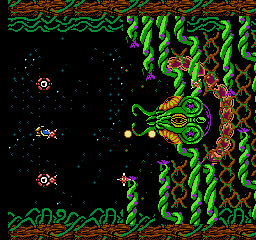 At the least, prior to Steel Empire, they made a classical side-scrolling space shoot-em-up with the slightly broken English title of Over Horizon. This is one of those rare games that got outside of Japan for a European release, but the Western hemisphere missed it entirely. Like Gradius II and Crisis Force, it’s a shame America never got to see this one on the NES, as it’s certainly one of the best 8-bit shoot-em-up to ever have been made. 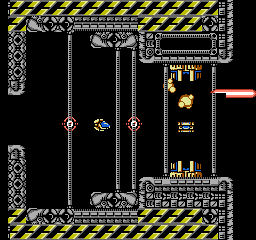 No plot is known of Over Horizon, only some vague alien threat intending to destroy or conquer the universe and blah blah blah et cetera and so on. It seems a bit generic up front, but if you actually care to play it for more than a minute, you’ll behold some of the most fantastic graphics for this genre on a relatively low-tech system. For starters, the first level is covered in overgrown flora with pulsating vines, and the second has many moving gates and foreground fences beneath which your ship passes. The ship in question is a cute little yellow fighter which is naturally loaded with enough firepower to wipe out an invading armada. 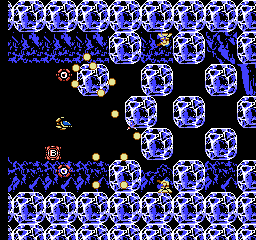 While it may not look like much, your craft has the uncommon ability to fire backwards, a feature which the Vic Viper and R-9 wish they had (but would carry onto Steel Empire). The A button fires front, the B button goes back, and holding the two buttons switches the positions of your options. You’re able to get up to two weapon pods that fire their own bullets and block incoming enemy fire. Of course, there are also three main weapon power-ups with the penetrating Laser (L), the quick Homing shots (H), and the powerful Bomber (B). You can gain up to three weapon levels by picking up the same letter repeatedly, where the first level only has your ship fire the weapon, the second level also has the pods fire it instead of mere bullets, and the third level beefs up the weapon to do more damage and/or fire faster.

These are pretty straightforward shooter armaments, but where it gets interesting is the “edit mode”, where you can actually modify the three weapons to give each one traits of the other two. The game was actually initially conceived as a “create your own shooter” game before Hot-B spun it off into its own product. With a maximum of five points to spend on mods per weapon, this can give you exploding lasers, homing bombs, or whatever combinations you see fit. Furthermore, you can also customize the positioning of both formations for your Option pods. You can choose to keep them close together for one formation and then spread them far apart for the other, or you can place them asymmetrically if that better helps your offensive and defensive preferences. 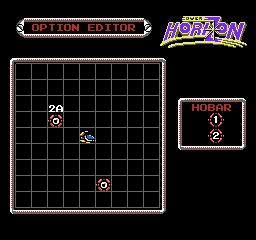 After retooling the weapons and Options to your liking, you can run the “test mode” to see how they work in live practice. When you get maxed weapons and both options, you’ll tear through most enemies in a blink, but taking a single hit sets you back to your basic gun. It’s not quite as much of a pain to catch up as in the Gradius series with only four required pickups to get you back into top shape, and weapons are somewhat plentiful. Even at your basest power, the ability to fire behind ensures you’ll never feel totally helpless, and you can adjust your ship’s speed from four different settings by pressing Select. 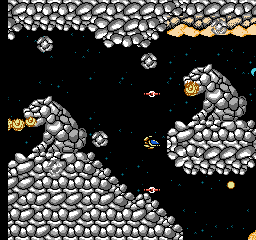 The simple weapon system makes Over Horizon feel fair, and the levels themselves throw in some tricky challenges, but it doesn’t feel too overwhelming for the most part. However, this is a shooter that makes good use of environmental hazards, so keeping your speed at the appropriate level is paramount to not losing control and crashing. For example, the third level, an icy cave, has checkered rows of ice rocks that are moved by firing, but they bounce back to where they were after hitting the next rock in front of it. They move just enough so you can fit your ship through, but you need to be precise with the small gap they allow. Stage four’s fire-spitting stone lions and stage five’s inertia-messing waterfalls also force you to be on high focus. 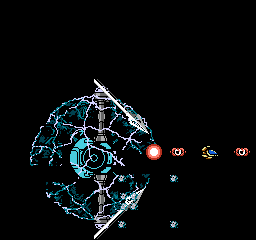 The enemies aren’t slouches either, with turrets everywhere, enemy-spawning platforms, rocks that open up and fire lasers, killer bubbles, and several other foes that seem more than a bit Gradian. Things can get quite chaotic despite the screen scrolling slightly slower than other shooters, but it does allow you several points to catch your breath before facing the next hazard. 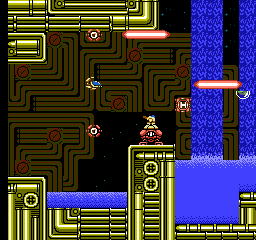 The only exception to being granted a reprieve is in the final level, which kicks the difficulty up from reasonable to rough. You fly around the enemy’s mothership while lots of fodder ships and tough robots who spam missiles attempt to block your entry. Breaking in reveals tight corridors lined with baddies and a rare moment where you’re offered a choice between two teleporters. Take the top one to move onto the final area (which is naturally all organic and icky), but take the low road and you get warped outside the bottom of the ship and forced to replay back up to the teleporter. A bit of a cruel moment for those who don’t know better, so consider this tip a freebie if you get that far. 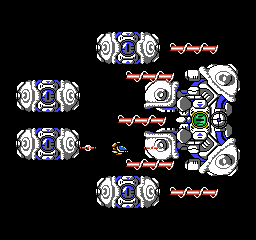 What awaits you at the end is just as vicious as the rest of the level, but let’s rewind a bit to discuss the magnificent bosses. They all look impressive and challenge you in different ways, like the first boss being protected by some floating worm guardian, the second controlling gates to restrict your movement, the third requiring you to shoot off layers of ice to hit its core, and so on. Once again, several of the bosses bear semblance to Gradius‘ rogues gallery, though the final boss is in no way an anticlimax akin to most Gradius masterminds. The only thing to recommend against this eldritch horror is to keep your speed at maximum and watch the tentacles at the edges. 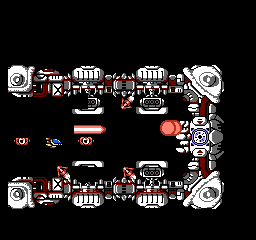 It’s tough not to compare Over Horizon to Gradius when it borrows similar enemies and aesthetics, but it might be argued that Over Horizon is more accessible than Konami’s seminal shooter series. Shooting behind is a welcome convenience and the power-ups don’t take too much effort to recoup after death. The slow pace may feel occasionally tedious, but you never feel like you’re being rushed along unwillingly. Infinite continues encourage you to fight to the end, and it feels manageable up until the severe challenge spike at the last stage, but most would still want to beat the game if they’ve come that far. The mechanics may not be super-original, but they’re incredibly well-polished and placed into one of the most dazzling packages on 8-bit hardware. 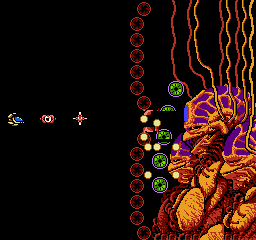 Sadly, the great graphics come at the price of some flicker and slowdown, but that doesn’t dampen the play flow too much. The music’s also quite well-done in addition, perhaps nothing too catchy but definitely accordant space shooter music that matches the action. Over Horizon is one of the greatest shooters on the NES, perhaps even one of the best compared to other shooters up there with Thunder Force and Darius. It bites that North America missed out on it, but it’s definitely worth importing or playing however you can. If only Hot-B made any more shoot-em-ups beyond this and Steel Empire, they might have been a Hot-A instead.