After Daisuke “Pixel” Amaya’s Cave Story became a major indie darling, he spent years trying to work out a follow up game. Eventually, we got a demo called Pink Hour, which lead to the completed Kero Blaster, a significantly different creature than Cave Story. Instead of taking inspiration from the exploration of Metroid and Castlevania, Kero Blaster instead took from the likes of Contra, putting a heavy focus on running and gunning.

The game casts you as a frog whom works for Cat & Frog Industries, who’s job it is to explore dangerous areas as a sort of “janitor”. clearing out monsters and junk interfering with important company technology. (“Kero” is the Japanese equivalent of “ribbit”.) His boss has taken in a new pet that turns out to be a Negativus Legatia, a creature born from some sort of time distortion. It’s never fully explained, but the creatures spread fast and end up being the source of all of the frog’s headaches. There’s also a second story in the unlocked Zangyou mode (aka hard mode), revolving around an absurd machine that creates work for the employees that’s just as silly as it sounds. 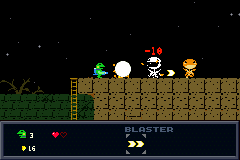 Kero Blaster sticks very close to the basics and aims to perfect them. You have a set number of lives, and if you run out of them, you must repeat the zone you were playing, though mini-bosses you beat on the way remain defeated. The game autosaves with every new screen you enter, so you can continue in a zone right where you left off if you stop to do something else. While you start with two hearts, you can buy more with coins collected from enemies and destroyed objects, making the game a tad more forgiving and giving the player a better chance to learn how to tackle a new enemy or obstacle. It’s a well done blend of old school design, even introducing new elements in the level in a safe way before it challenges you, and new school forgiveness for failure. Since the levels aren’t too long, failing to beat one isn’t as frustrating a set back as it would normally be (though the lab area starts testing this). 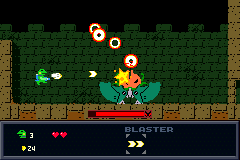 Along with buying more hearts for your life meter, you can also buy a heart jar that heals you upon death, more lives, simply fill your health, or weapon upgrades. You earn more weapons as you defeat bosses in certain levels, giving you a total of four, plus the powerful kero blaster upon continuing after beating the game once (though you also need to find it). The main four weapons are a pea shooter that can become a punishing laser with long range but no spread, the wider fan that eventually becomes a storm of bullets, the ground covering bubble that also floats up in water, and a punishing flame thrower that eventually generates a rotating fireball you can fire off as an extra projectile. Each weapon has their use, even the seemingly useless bubble, and part of the challenge becomes figuring out what works best for what situation. For example, the laser is great for long distances, but enemies at odd angles may be better gotten with the fan or bubble, while enemies with high health counts may need a big damage dealer like the flamethrower. Upgrading these weapons just adds to all this, as the new properties they take on end up changing how they fundamentally function.

Frog himself feels natural to control and creates momentum as he moves. His jump arc is easy to use, though it does require stopping and thinking at times because you have much less control once he’s in the air. Once you get the rocket pack, this only complicates further, as your second jump is stilted and requires an understanding of the space around you in order to avoid plummeting to your death or taking a nasty hit. You also need to keep into account where you’re aiming and where you want to aim, because once you start shooting in one direction, you’re going to be shooting there until you release the trigger. 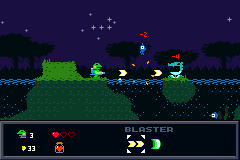 Frog can only shoot in the direction he’s facing or straight up. Once you hold down the fire button, he’ll keep firing and let you move around while he fires in that direction. However, this can open you up to enemies on the other ends you’re not firing from, and if you fire too early when you try turning, you may end up firing in the wrong direction. The game slowly encourages you to move at a steady pace and feel the rhythm of the level, to march in step with the enemies and react properly to how they act to deal out damage and avoid it efficiently. 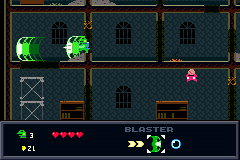 This really creates a sort of “groove,” in a sense. With the game’s contrasting, solid colors, simple sprite designs, and peppy music, it’s very easy to find yourself instinctively moving through a stage or fighting a boss. Less thinking in the moment and more thinking ahead of time and then finding a comfortable pattern you can easily react in. What’s surprising is that the game manages to create this feeling from just a single level, and never fails at creating that mood as it goes on. 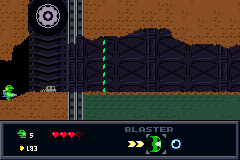 The game is a comfortable three to five hours (though really skilled players can easily breeze through it), but playing Zangyou mode is highly recommended. It makes some major changes to every past stage, almost feeling like a completely different game that will test your skill to its fullest. It kind of overdoes it with pits, but that’s a minor squabble. 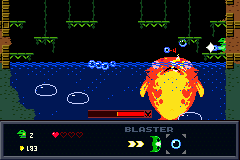 While Kero Blaster isn’t as complex or long as Cave Story, it manages to perfect its simple design in incredibly impressive ways. It’s a perfect example of less being more, something you don’t see often in the gaming world anymore, not even in the indie scene. It’s just something you want to revisit every once in awhile to see if you still got the chops, and the adorable art and score is just icing on the cake. 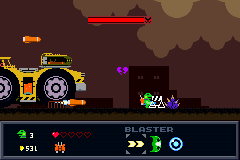 Also worth checking out are the two side games, Pink Hour and Pink Heaven. These were released as free demos for Kero Blaster, and stars the pink office lady of the main game. It plays identically, for the most part, though Pink Heaven gives you a choice of weapons after the first stage. They’re also quite short, but then again, they’re also free. Since the levels are different from the main game, it’s worth checking out as silly little side stories. 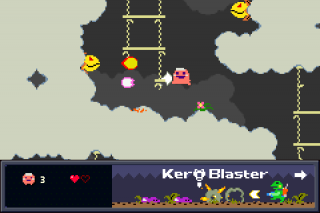 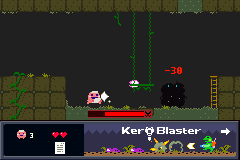 Adventures of Lomax, The
Night mode