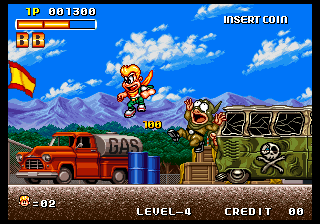 While they never reached the top tier of names like Konami or Capcom, you could generally count on Data East to bring out quality arcade games. This one’s no exception, and although it’s not quite as weird or unique as something like Nitro Ball, it’s still a ton of fun. It’s actually more like a spiritual successor to Joe & Mac: Caveman Ninja, which isn’t really a bad thing at all.

There’s not much of a plot involved with Spinmaster, not this sort of game really needs one. You play as Johnny and Tom, two treasure hunters differentiated by their hat, or lack thereof. They’re both out looking for pieces of a treasure map, as treasure hunters tend to do. Complicating matters is their enemy, the mad doctor that Data East swears isn’t cyborg Dr. Wily. Also, there’s a kidnapped girlfriend involved. No surprises there. The game itself is split into five stages set in different parts of the world, split into two or three “scenes” each, so you can expect to see your standards like the China level, Rome/Greece level, and Amazon levels. Sure, it’s about as cliche you can get for a game like this, but it doesn’t make it any less fun. 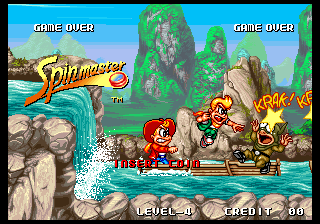 Your default weapon is a short range yo-yo, and you can pick up other weapons inside treasure chests. There’s also a slide maneuver you can kill enemies with, and the game has no issue with you just jumping on enemies Mario style. The weapons vary in usefulness, and some are worth holding onto much more than the others. Bombs are thrown in a small arc, for example, which makes it easier to hit things below you. The boxing gloves, on the other hand, send enemies flying across the screen, where they can hit other enemies in their path.

Every weapon also has a special attack, done by holding down the A button until you can see fire surrounding your character. Using it with the yo-yo will make it spin around your character, while the shuriken will summon a shadow clone that follows your movements for a few seconds. You can also pick up and use smart bombs, the effect of which changes depending on the weapon you’re using, with the bomb’s, er, bomb probably being the most useful of all.

For the most part, you’ll be using all these moves on the mad doctor’s hooded henchmen, along with the stray vulture. You can take out most enemies in one to three hits, so the challenge comes from the sheer number of enemies on the screen at once. Some enemies, like the really muscular henchmen, take more hits to kill, while others throw bombs and knives from a distance. And of course, there’s the boss at the end of every stage, usually preceded by the mad doctor dressed in an outfit based on your current location. The bosses generally aren’t too hard to deal with, although they can drain a few lives from you if you can’t figure out your pattern. 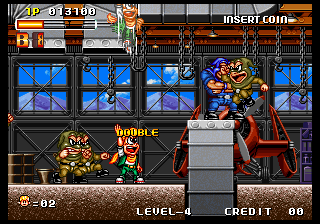 There’s also a brief bit of platforming to deal with, which can actually be trickier at times than actually fighting the enemies. When you’ve got a very cramped screen with enemies roaming around, along with jets of flame shooting out of the floor to avoid, that’s when the game starts to get tricky. Not especially so, of course, but just enough you have to start taking your time instead of running forward and mashing the attack button. It adds a nice bit of variety to things. And of course, there’s a mine cart section, because it’s a ’90s platformer. It’s the law.

At the end of the fifth stage, you’ll fight the final boss, a giant statue with five whole phases, the last of which involves Dr. Not-Wily’s UFO attaching itself to the statue. Much like Joe & Mac, the game gives you the choice of which ending you want, done by picking where you think the hidden treasure is. One option will actually give you the treasure, one will have the treasure explode in Johnny and Tom’s faces, and one is actually a horrible monster. Your choice of ending doesn’t affect anything besides a total of one picture, but the option’s nice.

The difficulty’s generally pretty mild over all, especially if you’re good with action platformers like Ghouls ‘N Ghosts. You get a guaranteed three hits per life, and while health pickups are pretty rare, it’s more health than you’ll get in a lot of games of this genre. It honestly feels pretty fair, and while there’s a few points where things get kind of cheap, it’s generally a breeze to clear. That’s hardly a mark against the game, however, it just makes it less of a chore to play compared to a lot of other arcade platformers. 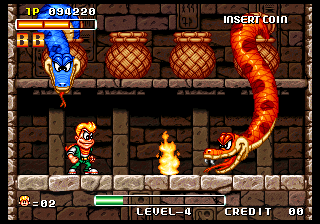 The characters look great, and they’re all done in a bright, cartoony style, with big, expressive eyes. Every level has its own unique enemies, like mummies in the Egypt level, and bronze statues in the Rome level. Sadly, the levels don’t have the same effort put into them, and they all look fairly generic. The music is fairly standard, faux-orchestral “adventure” stuff which doesn’t sound bad, but isn’t really anything you’ll remember after the game.

Overall, Spinmaster isn’t especially challenging, but that doesn’t make it any less fun. It’s short enough that it’s fun to play even after you beat it once, which a lot of more challenging arcade games don’t really offer. It doesn’t do anything particularly new, but it does what it does well enough that’s it’s worth seeking out if you’re a fan of the genre. Data East must have really liked these characters, too, because they’d go on to star in a second, entirely different game. Sadly, the co-op buddy relationship between Johnny and Tom would not last.