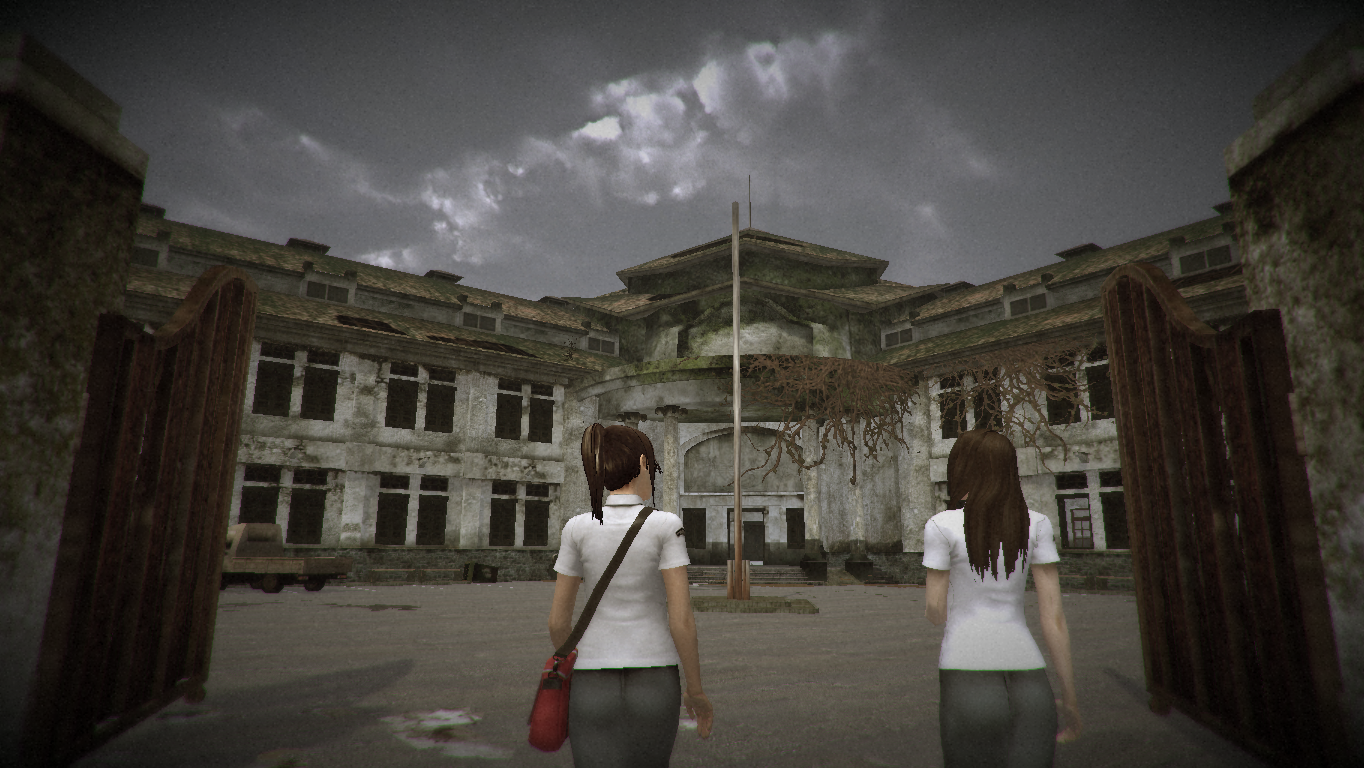 Back when Digital Happiness pitched DreadOut on Indiegogo in 2013, it felt like the ideal use of the crowd funding way, enabling voices we wouldn’t ever hear from otherwise, from places we rarely hear of in the context of video games, to realize their ideas. Digital Happiness is from Indonesia, a land where the game industry is utterly dominated by thoroughly profit-oriented smartphone and Facebook type games. DreadOut practically would be the country’s first fully realized 3D adventure game for PCs, and also the first commercial game by Digital Happiness. This should explain why DreadOut was off to a rough start – only the smaller of two acts was released in 2014, with loads of bugs and compatibility problems, followed by questionable updates that sometimes removed existing features. Since Valentine Day 2015 – an odd date for a horror game – the complete game is finally available, so a closer look at the result is in order.

DreadOut is deeply inspired by the Fatal Frame series, in which young girls armed with nothing but an old magic camera make their way through haunted traditional Japanese environments. Therefore, it’s of no surprise that the protagonist Linda is a high school girl who is also equipped with a camera. But while Fatal Frame is one of the most consistently dark and ghastly horror games around, DreadOut breathes Southeast Asian spooky kitsch. So Linda doesn’t carry an ancient and potentially magical camera, but simply uses the cam function on her smartphone. That’s also why the story begins with as many horror movie clichés as could be crammed into the first five minutes of a game. Linda and a handful of her schoolmates are on the road with their teacher Miss Siska to some unexplained school trip, when they take a wrong turn and happen upon a broken-down bridge. The kids are eager to find a way around it and reach a completely abandoned village. The place is creepy enough in daylight, but as the students dawdle around in the derelict school building, night falls and they find themselves surrounded by almost everything evil found in Indonesian folklore, led by a mysterious lady in red. 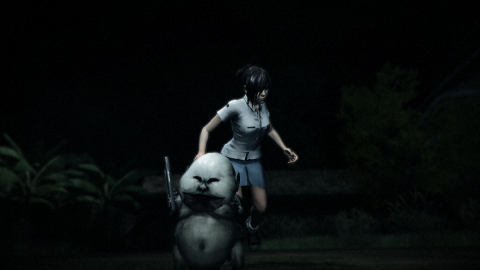 The Tuyul are little pests who like to steal your stuff.

Like Fatal Frame, ghosts in DreadOut really don’t like being photographed, so much so that they just leave this plane of existence after a certain amount of pictures have been taken. In theory, the gameplay is as simple as switching to the first person camera mode, pointing at a ghost and pressing the shutter button, but of course there are various complications. Some ghosts are invisible to the naked eye, which means Linda can only detect them by looking through her phone. Others are wicked fast and can only be captured when properly anticipating their moves, or require special treatment, like a ghost that can only be hurt by photographing the scar on its back. Later in the game, there are several interesting puzzles involving photographing angles, mirrors and invisible passages. It’s all digital here, so unlike Fatal Frame, there is no resource management in the form of films. The phone has a battery display which gradually gets lower, but it’s completely dictated by story progress.

Whenever Linda dies, she wakes up in a mysterious empty space – Limbo. All she has to do is run towards a bright light at the end, and she will be resurrected again. The only problem – the more often she dies, the farther away the light gets. At first it seems like a neat idea, but after dying two or three times, it quickly stops being cute and gets terribly annoying. There are three hidden items that allow her to pull the light closer, but at least one of them is easily missable. Then in act 2, the stuff gets stolen and you have to find it again – after a stupid chase scene where Linda is disarmed and can get killed a dozen times if you don’t know exactly what to do, and the game is especially bad at communicating the goal at that point. It’s cool the developers tried to come up with a way to make dying more undesirable and thus the game more scary, but in a game with sometimes very obfuscate mechanics, it just seems like a bad brainstorming idea that should have been discarded right away or at the very latest after a night of reflecting upon the decision. Apparently Digital Happiness has gotten a lot of complaints about this, so the Limbo can now be changed to always have the light at the nearest possible position. The bad variant is still the default setting, though. 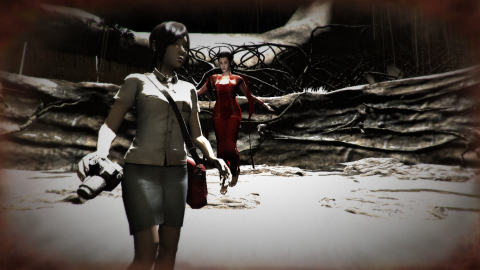 The Lady in Red is Linda’s most consistently reoccurring adversary throughout the game.

DreadOut goes the usual way of conveying background exposition through documents like newspaper clippings and diary entries. It all remains very vague, which in a way makes it more believable as actual reactions of people to paranormal phenomena, but it’s all written in a casual style and doesn’t quite seem to fit the gravity of the described situations. Part of it may be because the texts are translated from Indonesian, but also due to the rather kitschy nature of the scenario, inspired by pulpy mystery magazines, which are very popular in Indonesia. If a ghost is “beaten” or otherwise dealt with for the concerns of the game, it is entered in a “Ghostpedia”, which has a little image and a description of the associated myth in Indonesian folklore. It’s fascinating to learn about all this stuff, but makes the game seem less like a coherent horror narrative and more like a fun assortment of spooky stories, and the player often has to use a lot of imagination to integrate them with the overall plot.

What is actually going on never becomes clear the way it does in Fatal Frame, which at least went so far as to eliminate any doubt that the ancient camera was somehow imbued with magical powers. Here it’s not even certain what makes the ghosts so allergic to being photographed. The human characters are similarly underdeveloped. The only exception is Linda’s BFF Ira, who is shown responding to the spiritual energies in the village in a certain way, and who has some great scenes with the heroine, even though (or maybe especially because) those are rendered a bit awkward by Linda being a silent protagonist. 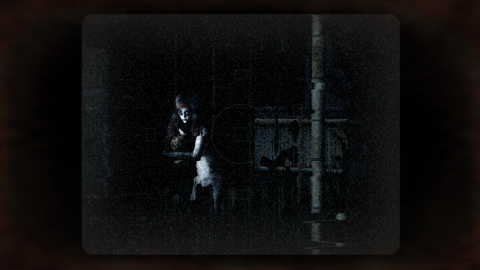 The game would be scarier if this was the best you’d ever see of the ghosts.

When at its best, though, DreadOut is really scary. The ghosts have some delightfully morbid designs, cool transformation effects and unique (but sometimes also frustrating) ways of fighting them. But there is one problem with them: You often get too good a look at them. The game is very dark most of the time and has a thick grainy filter, but whether it is intentional or due to a bug, the filters are deactivated within the camera view. So give or take a bit of dirt on the phone display, the view through the camera actually looks more real and tangible than the “real” world. This also means that you can see the ghosts much better, sometimes to the point of them becoming not scary anymore because the seams become visible. Halfway through the game, Linda finds a better camera, which even lets her zoom in on the ghosts. Right before the ghosts attack, the camera glitches out, which of course is used as a gameplay cue to pull the trigger, but from an atmosphere standpoint, it would have been better for the game if the display always looked like this when a ghost is in the frame. It also would have helped if not only some but all ghosts were invisible or barely visible without the camera. (A red vignette appears around the screen whenever a hostile ghost is near, so it wouldn’t be too unfair.)

The architecture in DreadOut looks very turn-of-the-century, not in style but because of the technical implementation. Buildings have sharp edges, objects are kept simple and many areas seem a bit empty, even considering that they’re all abandoned. Plant life looks a bit more convincing, and some of the outdoor areas are even fairly pretty. Characters are well-modeled, though also in a PlayStation 2 era, plastic doll-ish kind of way. When they animate, the skin on their joints tends to distort in weird ways (it can even be noticed on the official promotional poster above), which kind of makes the game even more creepy. 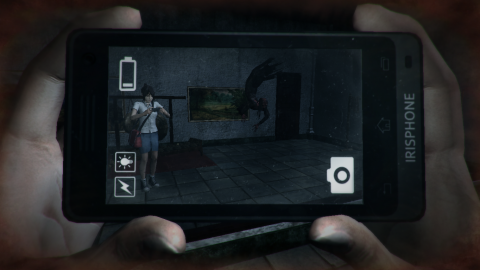 Not exactly the best of times for a selfie in the mirror.

Unfortunately, DreadOut is still plagued by a lot of technical hiccups. Some of the cutscenes stick out by having the graphical filters disabled for no obvious reason, and there are even a few FMV videos (presumably from early in the development), which don’t even do anything the in-game graphics couldn’t. In the few instances when physics are applied to objects, their physical properties are unconvincing and take you out of the experience just as much as the remaining occasional glitches like objects floating in the air or wisps of hair poking inside their owners’ faces. Clipping in general is pretty bad whenever characters directly interact with the environment. DreadOut runs in Unity, which means that all this demands more computer performance than the graphical fidelity seems to justify.

DreadOut is an interesting title in a setting that leans on many familiar influences, but in a variation that hasn’t been seen in games before. Together with its descriptions of various myths in Indonesian folklore, it’s almost as much of a cultural ambassador as Never Alone, only without the documentary latched on. Linda with heir awkward gestures is a cool silent protagonist, but the real stars of the game are the ghosts with their imaginative creepy designs, despite the technical issues that prevent them to be appreciated fully. DreadOut is not the most polished horror game out there, in fact it not even can be called particularly well designed in the grand scheme of things, but it has some genuinely cool ideas for the genre, some of which even work. Here’s hoping Digital Happiness are successful enough with it to enable them to carry on with their vision, especially because DreadOut is also fairly short. The epilogue after the good ending shows a seemingly savvier Linda getting ready to face a ghost-ridden modern urban area, which would be a cool prospect for a sequel.