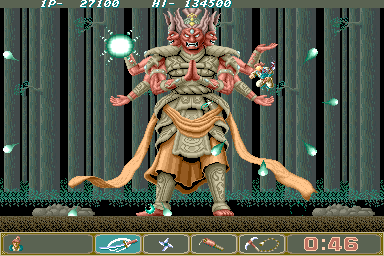 Ninja games were all over the video game landscape in late 80s and early 90s, but it’s interesting to note how few of them really feel “Japanese”. The most popular series like Shinobi and Ninja Gaiden tended to take place in international locales, probably owing to the popularity of the “ninja” in overseas markets. Irem’s Ninja Spirit is a bit different, one that features Japanese settings and monsters more than most. The Japanese characters in the title are Saigou no Nindou, or “The Last Way of the Ninja”.

The hero, a ninja named Moonlight, can use four weapons, which you can switch between at any time. The sword is wielded rather unusually, as it’s swung at an upwards arc, but it’s handy for blocking projectiles. The shurikens are much weaker but can be tossed in almost any direction. The bombs work similarly to the shurikens, but while they’re more powerful, they have a low firing rate. The “kusarigama” sickle has a long reach and can be bent in different directions, though ultimately it’s rather difficult to wield. It can also be used to block projectiles. Each can be powered up individually. 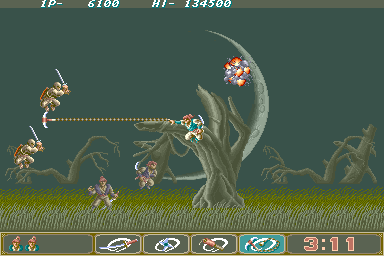 The gameplay is a mesh of different attributes from other action games. The most obvious inspiration is probably Taito’s The Legend of Kage – like that game, the hero of Ninja Spirit can jump very high, most of the length of the screen. (Though that’s still not as far as Kage could jump.) The fast paced action mostly closely resembles a run-and-gun like Contra, especially when wielding a projectile weapon. The stages tend to be flat plains (with a few exceptions). And enemies pop up from all sides (and in the case of the flying wolves, from the sky), which recalls Irem’s earlier titles like Kung Fu Master and Vigilante. You can also get power-ups which create “shadows” of the main character, which mimic his every move. This is identical to Ninja Gaiden II, though Ninja Spirit was actually released a couple years earlier, so it’s actually the true innovator of this concept.

In keeping with the Irem arcade tradition, Ninja Spirit is extremely difficult. You can only take a single hit before dying, which will send you back to an earlier checkpoint. From the third stage onwards, the screen gets cluttered with enemies and projectiles, both from your character and the enemies, especially when wielding the explosives. Moreover, while some of the generic ninjas can be taken down in a single hit, some of the stronger foes take much more damage, and it’s hard to identify when they’re about to attack, much less if they’ve been destroyed. Many times you won’t even see who or what dealt the blow that killed you. It’s especially a pain in the third stage, where the grass obscures the bullets that are shot by the rifle-wielding enemies. 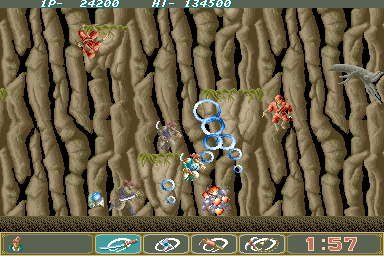 A few of the stages change things up a little bit. The fourth stage is the only level that consists of a few different areas, all of which let you run and attack on the ceiling. (The enemies can also do the same, of course.) You need to climb one stage vertically, though the game doesn’t exactly tell you this, as it lets you run forward infinitely until the timer runs out. The final stage has an absolutely brutal section where you need to dodge flying ninjas as you fall down a pit, and they pop up so quickly it’s nearly impossible to avoid them without knowing exactly where they’ll be, which requires a lot of trial and error.

Ninja Spirit is probably most well-known to American audiences due to its TurboGrafx-16 port. The biggest change is the “PC Engine Mode”, which gives your character a life meter. It will let you absorb five hits from standard enemies before dying, though some of the stronger enemies do more damage or can still kill you in a single hit. The bad guys aren’t quite as frequent either, and in general, the game is much less overwhelming. If the game feels too hard, there’s is still an “Arcade Mode” that removes the life bar, though even then it’s easier than the original arcade game. 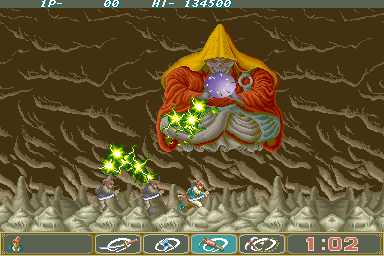 The visuals are arguably a little bit better than the arcade version, having benefited from the bright TurboGrafx-16 color palette. The removal of the status bar at the bottom of the screen also makes it look cleaner. The sound is a bit worse though. All of the levels have been faithfully translated, and each chapter now has a title, though they remain in Japanese. (They are translated in the English manual, at least.) There’s also a brief cinema of Moonlight’s father being attacked by a wolf at the beginning of the game. Overall, it’s a fantastic port, and not only one of the better action games on the TurboGrafx-16, but it’s better than the frustrating arcade original thanks to its balance tweaks.

The Game Boy port was developed by UK-based developer Bits Studio, despite not being released officially outside of Japan. The company also worked with Irem to port R-Type to portable platforms. In spite of the much smaller sprites, the game looks and plays reasonably well for a Game Boy game, and even includes a “Game Boy Mode” similar to the TurboGrafx version, which lets you take a few hits before dying. However, the bosses take many more hits to kill. As a compromise, whenever you die in boss battles, you are resurrected on the spot, rather than being sent back to a checkpoint. 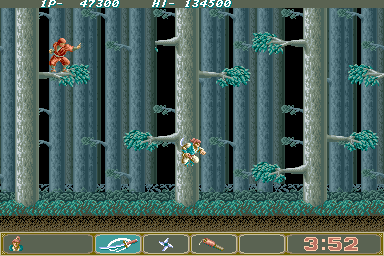 There were also ports to the various European home computers, published by Activision. The Amstrad CPC version is the worst, with poor graphics and choppy, unbearable gameplay. The ZX Spectrum version is slightly faster, though still slow, and while the sprites look nicer, they have a tendency to blend into the background. In both of these versions, both the player character (and his shadows) and the enemies use the same sprite, so it’s hard to tell them apart.

The Commodore 64 version looks rather poor, with tiny sprites, but it’s easily the best playing of the bunch, with fast, smooth action, and fantastic music courtesy of Martin Walker. The Atari ST and Amiga versions are mostly identical, with the Amiga version having better sound. The sprites look decent, but there are some noticeable background planes missing. The speed is also slower than it should be, and the controls are quite sluggish. Considering the hardware, it’s a poor effort. An emulated version is also on the Dotemu’s Irem Arcade Hits compilation for Windows, though it’s not much different from playing it on MAME. 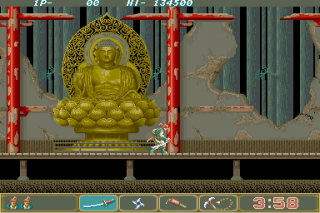 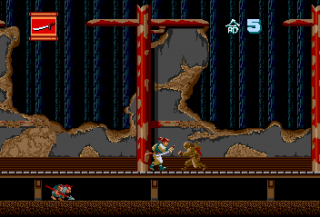 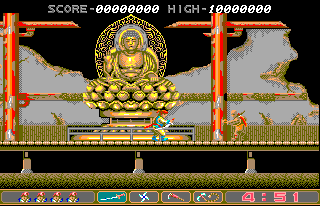 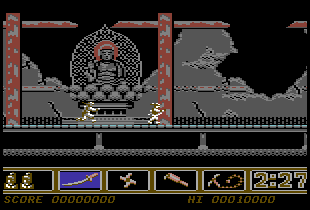 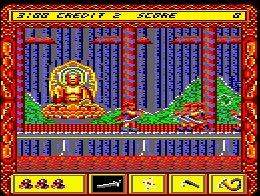 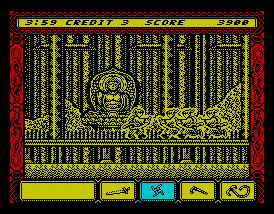