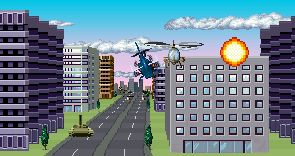 Thunder Blade is one of those mid-to-late 1980s Sega arcade games that gets a bad rap. Like many of its brethren, this was because the home systems at the time weren’t nearly powerful enough for faithful arcade ports. But while After Burner, Space Harrier, and even Galaxy Force reaped the benefits of re-release on 32-bit and later platforms, Thunder Blade didn’t quite get the same treatment.

It’s a shame, of course, because the original arcade game is actually pretty cool. The concept was obviously born from one of Sega’s developers catching Roy Schneider’s Blue Thunder on TV late one night and decided to make a video game loosely based on helicopters shooting stuff (the title screen is even a digitized still from the movie). It runs on the classic Sega X Board, and uses Sega’s popular “super scaler“ technique for some pretty impressive effects. There are two distinct camera angles: an overhead, and an over-the-shoulder viewpoint. 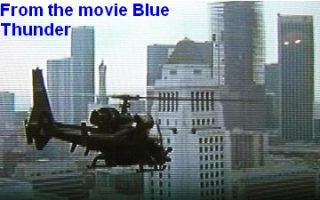 The overhead sequences are impressive; since your helicopter is angled towards the ground the view is slightly tilted, which is unique. Your arsenal includes both a machine gun and missiles, both of which have unlimited ammo – the only difference is their attack range. In addition to moving left and right, you can also raise or lower your altitude, scaling the ground back and forth with some impressively smooth animation. Just watching it in action is incredibly cool, especially after you’ve been shot down and take off back into the skies. The helicopter has constant momentum going forward – although technically you can’t move forwards and backwards within the visible playing field, you can alter your speed, which includes a super fast turbo mode.

There are a number of cool effects at work here. Other Sega “super scaler“ games like OutRun pulled off a bit of visual trickery by layering several identical tiles one after another, each positioned and scaled slightly different from the last. This gave the impression of a solid object like, say, a canyon wall. Obviously the technique looks a bit cheesy in retrospect, but it’s remarkable for the time. Due to its unique perspective, Thunder Blade does something different. The buildings and mountains found throughout the game are all layered tiles, but each tile moves at a different speed as you fly past, which gives the illusion of depth in a strictly 2D game, without any fancy use of polygons. Pretty clever!

A distance meter highlights your progress through the level. Partway through the stage the viewpoint changes to a more familiar over-the-shoulder perspective. They’re pretty much just like the bonus stages of After Burner, in that it’s possible to crash into the scenery if you’re not careful. Here, the machine gun is used to take out airborne targets, while missiles travel along the ground.

When you reach the end, the perspective once again switches to an overhead view, except now you can’t change you altitude. Your goal is to conduct a bombing run on a gigantic tank and/or jet, taking apart its turrets piece by piece. The only exception is the final stage, which ends in the over-the-shoulder perspective against a different variety of gigantic tank.

It’s a short game with only four rounds, consisting of flights through a city, the wilderness (complete with a harrowing trip through some caverns, where you skillfully need to dodge rock pillars), a canyon, and an oil refinery. It’s pretty standard stuff, but like most Sega games of the era, the brightly colored pixel art is attractive, and it can’t be overemphasized that the scaling still looks incredible, even decades later. The music is appropriate 1980s action fare, with a significant if not overwhelming amount of cowbell. It’s rather unmemorable, since the explosions tend to drown it out, but it works well enough. Of course, like many other Sega games, the big draw of the arcade version was the sit-down arcade cabinet – the home versions just don’t have quite the same appeal. 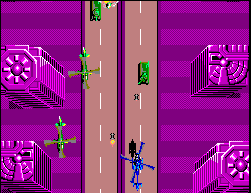 The Master System port obviously can’t even come close, and doesn’t even try for the most part. The overhead scenes have been changed entirely to 2D, without the ability to change altitude or alter your speed, while all of the 3D effects have been totally removed. As such it feels like a really standard, really boring shooter, especially since your firepower is so weak and there aren’t any extra weapons. Strangely, most of the helicopters you fight don’t fire any guns, and are content to fly in the same handful of formations, ramming straight through your copter in countless kamikaze attacks. 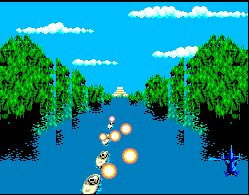 The over-the-shoulder segments aren’t much better. Naturally, they’re pretty choppy, but the first stage is remarkably boring because half of the enemies can’t even damage you – they’re just there for target practice. It gets more difficult by the second stage, where the choppy scrolling makes flying through the cave and maneuvering quite difficult. The levels are essentially the same as the arcade game, although the order of the bosses has been changed. The only positive aspect is the image of the burning, wrecked helicopter when you lose all of your lives. Otherwise, it’s a total wash. Interestingly enough, the Japanese version uses a few different sound effects to the American/European version, which is a little less harsh on the ears.

There are numerous other ports, available for home computers. One of the best is the X68000 version, ported by SPS and published by Sharp in 1990. It’s close to arcade perfect, though the sprites are smaller and less numerous. But since this version was only released in Japan, Western gamers had to do with one of the many conversions published by US Gold.

Most of these, for the Commodore 64, Amiga, Amstrad and PC, are notably impressive, because they actually contain the scaling in the overhead stages, which the console ports never bothered with. They’re obviously not quite as smooth, and the tiles aren’t as detailed – they’re usually just a single color or two, depending on the version – but it’s not bad, despite the huge border on the top of the screen.

The Amiga and Atari ST versions look the best, while the IBM PC release has some notably downgraded visuals. The problem lies with the controls – in most of these, you need to adjust your speed manually, otherwise you’ll just hover in midair. In the Amiga version, for example, you need to hold down the fire button and press up to increase speed, then press down to take off. It’s rather unintuitive, and can lead to a lot of cheap deaths. The only version spared from this is the Commodore 64 version, which despite being one of the worst looking of the bunch, handles fairly well. The ZX Spectrum version is monochrome, choppy, and the worst of the bunch, while the MSX version is just a quicky port of the ZX Spectrum version.

There are two 16-bit console ports. The Genesis version was released around the launch of the system and is called Super Thunder Blade, despite there being nothing “super“ about it. The first overhead section of each level has been cut out entirely. Instead, each stage starts off in the over-the-shoulder segment. To make up for this, these stages are longer and have a new mid-boss, similar to the one fought at the end of the arcade version. After defeating this, you go into an overhead view, but there’s no scaling at all. You couldn’t change altitude in these scenes in the arcade game either, so they play similarly. Once again there are only four stages, with the first, second and fourth being roughly identical to the arcade game, and the third being a brand new level that takes place over the ocean. There’s also a new final boss, fought in the overhead perspective. The targeting is also simplified, as missiles now home in on enemies.

Regrettably, the hardware still chokes on the game. The 3D scrolling is better than any of the other ports save the X68000 version, but it’s still a far cry from the arcade game. The multi-layered buildings are now just a single layer, and some areas look embarrassingly bad, like the caverns in the second stage.  Additionally, there’s a split second of lag before every movement, which makes maneuvering through anything a massive bout of frustration. You can stop and hover but otherwise can’t change speed. Overall, it’s a terrible port. 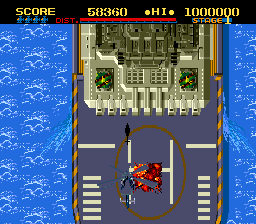 The PC Engine version, ported by NEC Avenue, actually keeps all of the overhead sections. It removes the scaling, but as a compromise, allows the helicopter to move up and down the screen, which you couldn’t do in Super Thunder Blade. The scrolling is slow and choppy, but it’s better than just hacking out these segments altogether. The animation in the over-the-shoulder stages is smoother than the Master System version, but not quite as good as Super Thunder Blade. The distance meter is present – it’s absent from the other console versions – but you still can’t change speed. All things considered, it’s a better port than any of Sega’s own attempts, though that’s not saying much. 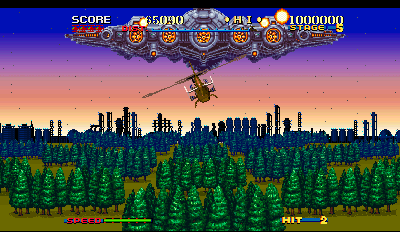 The 2014 3DS port is the only one to do the arcade game justice, with the usual widescreen and 3D enhancements. Also new is a “Special Mode” with rebalanced gameplay, altered levels, boss introduction text, and an extra level featuring a new final boss, based on the Grantanoff flying fortress, taken from the SMS version of After Burner. 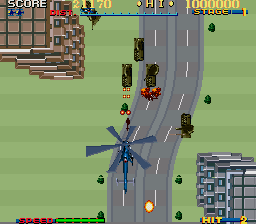 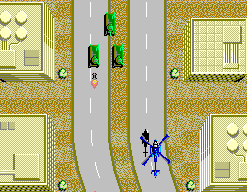 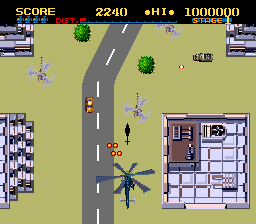 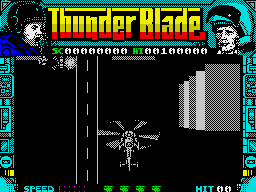 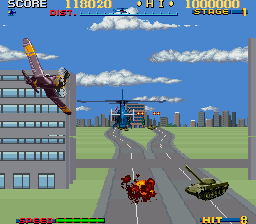 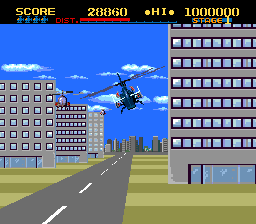 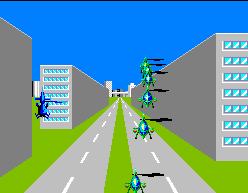 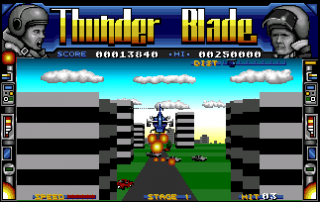