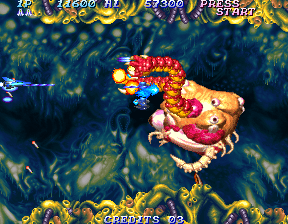 Salamander 2 was released in the wide gap between Gradius III (1989) and Gradius Gaiden (1997). The graphics are a huge leap over the original games, running on Konami’s GX Type 2, the same hardware as Gokujou and Sexy Parodius and TwinBee Yahho! It features some prerendered CGI and hand-drawn 2D sprites, for a somewhat unique look.

Part of the first stage is based on the intro level to Salamander, complete with a reappearance of the Golem. Without warning, a gigantic multi-eyed monster erupts from the side of the screen, chomps on it, and then proceeds to fight you. It would be really grotesque, except said monster looks like something out of a Monty Python skit, so it’s really more unintentionally hilarious. In general, the visuals are substantially better than your average 16-bit game. However, it does look a bit washed out and sterile compared to Konami’s extremely colorful Xexex, which had been released a few years prior. It’s hard to hold that against it though. Salamander was always meant to be a darker game anyway. 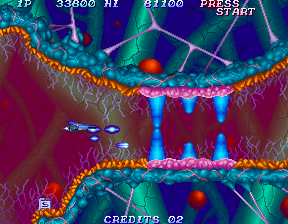 Gameplay-wise, Salamander 2 is just like Salamander – two-player simultaneous action (though the second player is now the Super Cobra, named after the early 80s Konami shooter), instant respawn, and no power-up bar. Things work mostly the same as before, except there’s a Twin Laser in addition to the regular and Ripple lasers, and weapons can be strengthened by picking multiple power-ups. You can also sacrifice one of your Options for a powerful attack, which will home in on an enemy to inflict some extra damage. The Option survives, but shrinks to half size. If you pick it up, it will rotate around your ship and automatically fire forward.

There are a total of six stages – four side-scrolling, and two overhead. The second area, an overhead level, features mini-planets that explode into solar flares, similar to the first level of Gradius II. The third is a biological level and the fourth stage takes place in outer space, flying amongst huge battleships. The fifth and sixth stages consist of an asteroid belt and a base, leading up to Abaddon, the spooky-looking final boss, a multi-headed creature that looks like something out of a Lovecraftian nightmare. It’s a short game, and while it’s not as hard as Life Force, it still puts up a challenge. However, in all of the consoles ports (on the Salamander Deluxe Pack for PlayStation and Saturn, and the Salamander Collection for the PSP), you’re offered unlimited continues. Also, for the PS1/SAT versions, if you clear the game a few times, you can change the title screen to read “Life Force 2”, though this doesn’t change the game much beyond increasing the difficulty. (The game was never actually released in the arcades under this title.) 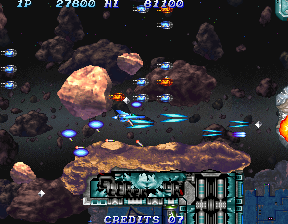 Salamander 2 is decent fun but ultimately rather insignificant, because nothing about it really stands out, especially compared to other Konami shooters. There aren’t any interesting mechanics or weapons, and the levels are things we’ve seen before, only slightly better looking. The only truly noteworthy aspect is its spectacular soundtrack, a heavily melodic set of tunes that hearken back to the older games but with a harsher edge. There are several boss themes, and some extra music – including remixes of old Salamander tunes – plays in the second loop. Many of the songs are composed or arranged by Naoki Maeda, known for several Dance Dance Revolution tracks. There are even more songs hidden in the sound test and on the soundtrack CD. Excellent stuff.