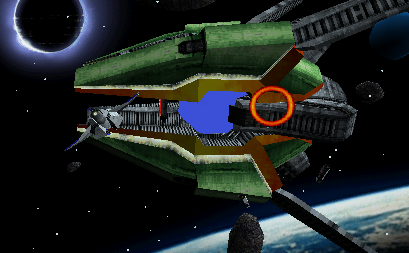 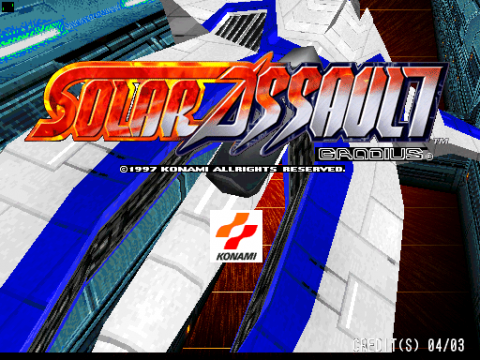 Back in 1997, the idea of Gradius in 3D seemed beyond awesome, so Konami created Solar Assault, an arcade only Gradius spin-off that plays like Star Fox and Galaxy Force II. Even though the viewpoint has been changed to an over-the-shoulder view, the concept is just like Gradius – kill enemies, get power orbs, strengthen your weapons, and shoot more bad guys. It has all the standard Gradius levels like an asteroid field, a sea of flames, a Moai stage, a planet level, and a speed up zone filled with twists and turns.

There are three ships – the trusty Vic Viper and Lord British, along with a new one, the Alpinia. Each of them has its own set of weapon upgrades. When you equip the laser, you can also fire charge shots by holding down the button. 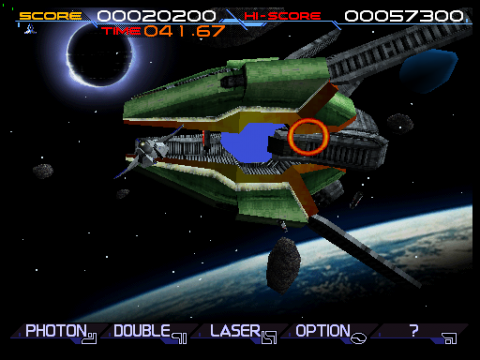 It’s a somewhat difficult game to play. The analog control is imprecise, which is pretty rough in a game where you can die in a single hit. It’s also extremely difficult to hit anything due to the lack of crosshairs. This is somewhat negated by the Psycom missiles equipped on the Alpinia, which automatically home in on enemy targets. Otherwise, missiles are hard to use.

The graphics look fantastic, better than any PlayStation or Nintendo 64 game from back then, running at a higher resolution with some nice graphical effects, and very smoothly too. It runs on the Konami GTI board, which also powered Gradius IV. The music is thumping techno, and is mostly forgettable.

Solar Assault is great for the novelty factor. It’s really cool to see Gradius mainstays like the Big Core ship and the flaming dragons modeled in 3D. The Moai stage boss is particularly freaky, as it’s dressed as a pharaoh and has bulging white eyes. It’s also especially cool if you manage to find an arcade cabinet for the fully immersive experience. Outside of that context though, it’s definitely style over substance. This is undoubtedly one of the main reasons it never got ported – it just wouldn’t be as flashy on a home system, plus it’s quite short. The game is currently emulated in MAME, though it’s still glitchy. 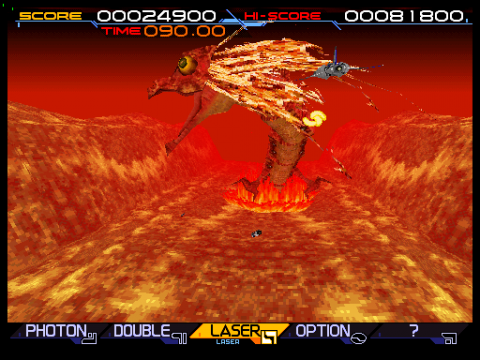