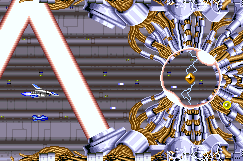 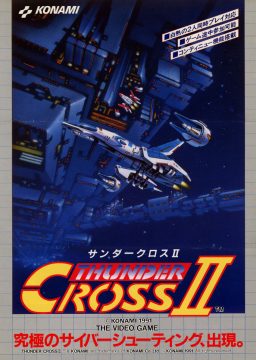 The sequel to Thunder Cross is pretty much more of the same, with another seven levels of action. It runs on the same hardware, though the graphics are enhanced slightly and the sound has better percussion. There are some minor modifications to the weapons, as the Flamethrower has been toned down, so instead of constant flame streams it shoots out phoenixes. Still cool, but not as cool. The only aggravating part is that the normal blaster is in the orb power-up cycling, making it possible to downgrade your current weapon if you’re not paying attention. 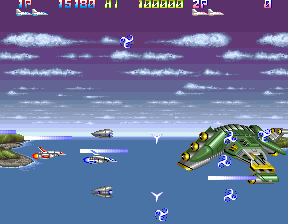 The game does have some pretty cool bosses, like what appears to be a robotic version of Medusa, complete with a shoulder-mounted bazooka, as well as a robotic chameleon. The ending reveals some of their goofy names, including “Ragamuffin” for that Medusa robot, along with such Engrish-y nonsense as “Brookrans, Works”, “Laze, Zoguylum”, and “Sproutes, Layber”.

The penultimate foe almost resembles a Gradius final boss, in that it’s a big bubble that sits in the middle of the room, but this one actually fights back with reflecting lasers and bouncing bullets. It has a cool design too, with a mountain of wires that pulse almost like veins. Another stage is an asteroid field – pretty typical for shooters – except the off-screen boss at the end of the stage is firing huge laser blasts, half the size of the screen, and the only real way to avoid them is by using the gigantic rocks as cover. This concept was borrowed from Space Manbow.

The composer, Metal Yuuki (AKA Mikio Saiyou), was once employed by Tecmo. Two of the songs in Thunder Cross II – “Dog Fight III” and “Kartas Part 2” – are actually “sequels” to tracks from two shooters he previously worked on, Super Star Force and Strato Fighter (AKA Raiga). Other games of his include Ninja Gaiden (Arcade) and Akumajou Dracula X (PC Engine). He likes to make the FM synth sound as close as possible to electric guitars, giving it a heavy metal feel similar to Technosoft’s Thunder Force. In the soundtrack CD liner notes, he had the analogy that Gradius is like a heavy tank, and Thunder Cross is like a sports car. He used that imagery to create the rocking boss themes. 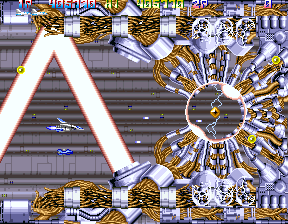 Like its predecessor, Thunder Cross II is very solid, but hardly the best in Konami’s library. It was released in 1991, the same year as Xexex, which blows it away both from a technical and a design standpoint. It was also the year that Street Fighter II was released, when most arcade shooters began to fall out of favor. Sadly, that also meant that the game was never ported outside of the arcades.