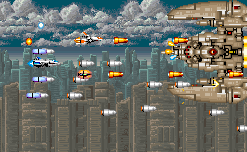 Salamander / Life Force is often considered the sister series of Gradius, mostly because it uses the same ships and Nintendo’s 8-bit conversion used the same power-up system. However, Thunder Cross is actually a bit closer to Gradius, at least in design. Story-wise, it even takes place in the same universe, although the enemy this time is the evil Black Impulse as opposed to the Bacterian Empire. It also offers two-player simultaneous play, through rather than the Vic Viper and the Lord British, you pilot the Blue Thunder T-45 and Red Thunder M-24. Basically, Konami took the enemy designs and patterns of Gradius, changed up the graphical style a bit, altered the power-up system, and created Thunder Cross. 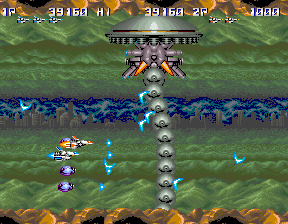 You’ll recognize a lot of same bad guys, who fly in the same waves, and leave behind power-ups if all of them are killed. Most of these orbs default to S for “Speed Up”, of course, but if you wait a few seconds, it’ll cycle to different letters, including a powerful Vulcan cannon, bouncing Boomerangs, and a Twin Laser, which fires both forward and behind. Some will also drop Option orbs, which create a little invincible pod to double, triple, or quadruple your firepower. Once you get four Options, there are also three “special” weapons that appear, which includes a Flamethrower, a Macro Laser, and Napalm bombs.  Once equipped, these are only available for a limited amount of time, since they’re so overwhelmingly powerful. The Flamethrower is particularly fun, since it creates four steady streams of fire that flow upwards and downwards slightly with movement.

Unlike the original Gradius games, the Options fly in a vertical formation, and can be positioned closer or farther from your ship by holding down the secondary button. This type of Option clustering was later reintroduced into the Gradius series in Gradius III, which was released a year later. Although the Blue Thunder T-45 doesn’t technically show up in any other Konami shooters, Hikaru and Akane from Gokujou Parodius have similar weapons, and the Option / Multiple ship in Sexy Parodius can morph into it, sharing some of its arsenal. Emon-5 from Otomedius and Arnval from Otomedius Gorgeous also use this weapon set. 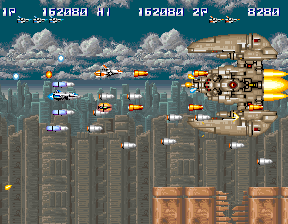 Of course, there are some pretty significant differences from Gradius too. The game does not utilize checkpoints, instead resurrecting you right where you died, and there are no bomb / missile weapons either. The background designs, while occasionally utilizing similar styles – especially apparent in the final stage — are often drastically different, taking place above other typical shooter landscapes like cities. Most levels also includes several layers of multiplane background scrolling, which was an impressive effect for the time.

The music is composed by Seiichi Fukami and Junichiro Kaneda, both of whom also contributed to the Gradius III soundtrack. In the soundtrack liner notes, Kaneda stated that “In the Wind”, the first level theme of Gradius III, is the twin of “Skywalker”, the second level theme of Thunder Cross.

Even though it’s a pretty high quality game, Thunder Cross has largely been forgotten, probably because Konami neglected to port it to any console at the time. Its only true home port was for the PlayStation 2 by Hamster, as part of its Oretachi Geesen budget line-up, released in 2007. It includes a mini CD with the soundtrack, as well as a mini DVD with a quick video. The port itself is just a version of MAME ported to the PS2, along with graphical glitches. 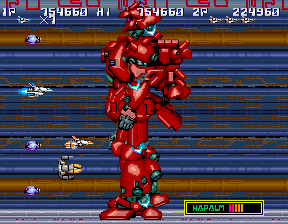 There are several different versions of the game. The North American release is heavily dumbed down, as it removes all power-ups except for the Vulcan weapon. Your ship has two Options at all times, but you can’t reposition them. Instead, it’s equipped with a limited quantity of bombs, dubbed “Lil’ Baby”, which are really just the same as the Napalm explosions. The level order is also different. Further, some enemies explode in an extra barrage of bullets or homing missiles, so it’s more difficult overall. There is also another English version, which is basically identical the original Japanese release. Finally, there was also a secondary Japanese version that increased the difficulty, due to complaints from arcade operators that the game was too easy.