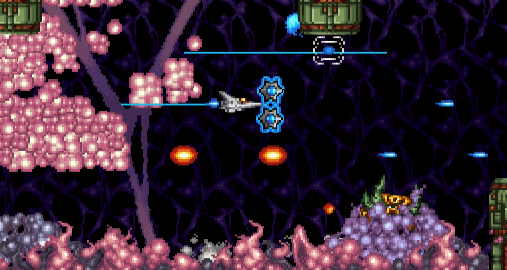 Gradius Rebirth, released as a WiiWare title in 2008, is somewhat of an inappropriate name. One might be tempted to call it “Gradius Rehash”, since much of it is based off of recycled elements from previous games, even moreso than usual for the Rebirth line. Plus, Gradius IV was already subtitled “Fukkatsu”, which basically means the same thing. 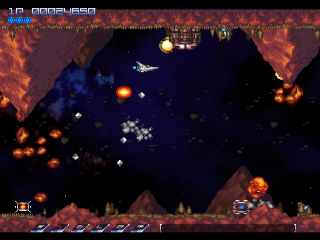 At least that had the updated graphics going for it. Gradius Rebirth is designed to look and sound like a late ‘80s or early ‘90s Konami arcade title, circa Gradius II. There are some additional effects that weren’t present in games of the era, like sprite rotation. This sort of retro styled design worked for Mega Man 9, since most classic fans agree the series peaked around the second or third NES game. On the other hand, most people consider Gradius Gaiden the pinnacle of that series, at least in the classical sense, not considering the direction that Gradius V took. The opportunity to make an “old” game might come off as a bit cheap, and a step backwards.

And yes, on some levels it feels a bit uninspired, although it occasionally puts some twists on them. There’s another replica of the first level of Gradius, except you can destroy a control panel which either turns the scenery snow white or sets it ablaze with fire. It’s not nearly as cool as the black hole from Gradius Gaiden, but it’s still a pretty neat concept. There’s another biological level a la Life Force, a Moai stage, a desert level (with black platforms seemingly ripped from the HR Giger-inspired level of Gradius II), and the requisite final mechanical base stage. These are all loosely based on the levels from the first Game Boy game. Its biggest issue is that it’s only five stages long – the game ends right as it’s picking up its groove, although perhaps one can’t expect too much for a low-priced downloadable game. At least there are a handful of brief, hidden stages, as well as multiple endings, and the levels actually change after each loop. 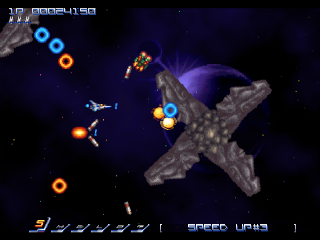 But for all of the complaints regarding its lack of innovation, Gradius Rebirth is still an extremely well-designed game. It manages to provide a better difficulty balance than any of the original arcade games, especially on the lower settings, where extra power orbs are provided after respawning. In the regular arcade mode, you’re allowed infinite credits and can restart the game any time at any checkpoint, much like the PS2 ports of Gradius III and IV and Gradius Galaxies. There’s also a Score Attack mode which challenges you to beat the whole game in one sitting.

There are a few clever areas too, particularly the area before the second level boss. You need to shoot your way through some vines, but at the same time, you’re chased by little pink blobs. If you weave through the vines properly, they’ll get stuck, protecting you from harm. The kicker is, each one of these blobs will give you a power orb – and you’re being chased by over a dozen of them. If you’re fast enough to dive through the vines, wait until they catch the orbs, then double back to destroy them, you can get yourself powered up in no time. 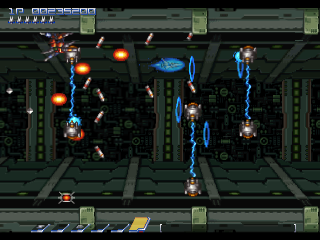 But perhaps best of all, Gradius Rebirth is a huge love letter to fans of the MSX games. The game takes in Space Year 6664, making it a prequel to Gradius 2. It stars James Burton and features Dr. Venom as his commander, before he turned evil. The Vic Viper’s AI computer is named GAUDI, the same as the ship in Gofer no Yabou Episode II, which in turn was reused as the name of the computer database in Snatcher. It was renamed JORDAN for the English Sega CD release, but used again under its original name in later Metal Gear Solid titles. The computer itself looks like a Wii with the head of Metal Gear Mk. 2 from Snatcher. The introduction newscast features shots from other Konami games, including Antarctic Adventure and Shalom.

Nearly all of the music is taken from the MSX games, rearranged to use the same instrumentation as Gradius II and III. A few other songs are taken from the Famicom version of Gradius II, and even the second Game Boy game. All of the music is composed by Manabu Namiki, the composer of many Cave games and essential go-to guy for old school-style shooter music. Although there are only three weapon configurations in the beginning, you can unlock more as you beat the game, including the return of long forgotten weapons like the Up Laser. A free DLC patch also tweaked some levels and added some extra music. 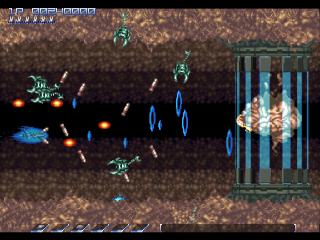 Gradius Rebirth was not designed in-house, but was instead handled by M2, the same company who handles much of the Wii Virtual Console emulation, and also developed Fantasy Zone II DX for the Sega Ages PS2 collection. Due to its short length, it feels a bit incomplete, but they’ve still done a fine job of replicating Gradius and providing treats for longtime fans.