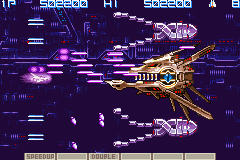 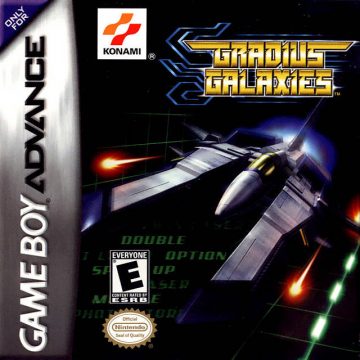 Gradius Galaxies was developed by Mobile 21, a joint venture between Nintendo and Konami which focused on portable games. It’s not exactly innovative, but as a miniature version of Gradius, it’s quite good.

For starters, it’s obviously not nearly as compromised as the previous Game Boy titles, so despite the low resolution, it’s still quite playable. The graphics are better than Gradius III but not quite up to the level of Gradius Gaiden. Some of backgrounds, like the bright red moon in the cavern stage and the comet in the warp level look pretty impressive. There’s also some occasional use of rotation and scaling effects, like huge, slowly rotating asteroids with narrow openings in the middle. 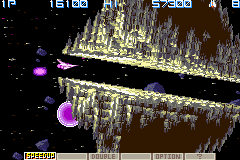 In many previous Gradius games, there’s an invincible boss that will slowly make its way back and forth across the screen, forcing you to hide in small nooks to avoid getting crushed. Here it’s a buzzsaw-like machine that inflates to take up a huge portion of the screen – it’s similar to the one in Gradius Gaiden, but much, much more menacing.

While the graphics are decent, the same can’t be said about the music. Much like Castlevania: Harmony of Dissonance, the music quality is severely compromised, featuring obnoxiously shrieking bleeps and bloops that sound significantly worse than your average NES game. 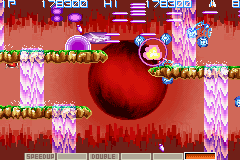 The levels aren’t too interesting, with only a few cool innovations here and there. The second level is reminiscent of one of the stages in Gradius 2 on MSX – it consists of glass platforms, which can be shattered by shooting at them. If you’re not careful, you can destroy the foundations of these platforms, causing the ceilings to collapse down on you. The underground level contains waterfalls that hover in mid-air, which is similar to a stage in Xexex. There’s an outer space level, an underground level, a fire level, a Moai level (featuring a cybernetic Moai boss), and a mechanical base level. The final boss is essentially just a huge brain in a tank. For some reason, the famous Gradius cores look more like eyeballs than orbs, and actually shudder when you hit them. There are only four weapon configurations, all similar to Gradius III, though each gives the Vic Viper a different color.

Gradius Galaxies is a solid game, even though it doesn’t bring anything new to the table. It’s not nearly as frustrating as its arcade counterparts, and the ability to restart at any checkpoint make it an easy pick up and play game. But it also lacks any real identity, and so it feels a bit unfulfilling.  Strangely, Gradius Galaxies was released in America and Europe before it came to Japan. The Japanese version has some extra bonus challenge missions added in.