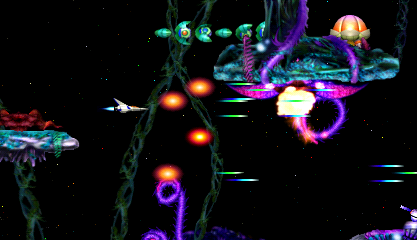 The subtitle of Gradius IV, Fukkatsu, means “resurrection”. It signaled the return of Gradius to the arcades, seeing that ten years had passed since Gradius III. With the enhanced game technology came higher resolution graphics and polygonal environments, but unfortunately, not much else. Gradius IV is barely a new game, to the point where it feels like a “best of” remake of earlier Gradius episodes, just with more technically advanced graphics. Gradius III suffered from the same issue to an extent, but it’s even worse here. 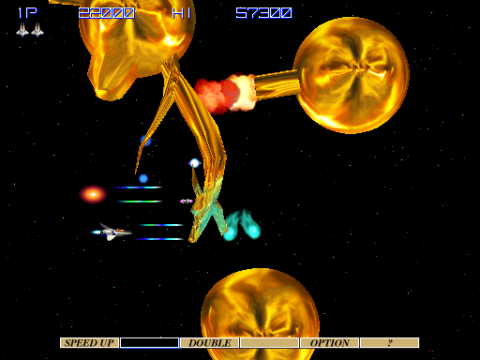 The first stage is like the fire sphere level from Gradius II, except the suns and dragons are made of a shiny, metallic substance – it looks pretty cool, but from a gameplay standpoint, it’s a bit too familiar. The second stage is a plant level, like those in in Gradius III and Gaiden. The third stage is a combination of the crystal stage from Gradius II and the bubble stage from Gradius III. The fourth stage is another volcano zone, and one of the few areas where it actually uses the extra horsepower to do something interesting – the lava flows in waves, with small islands bobbing up and down fiercely, creating the kind of claustrophobic terror that Gradius is known for. 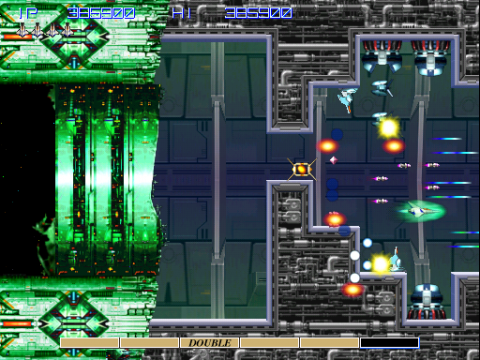 The fifth level is yet another Moai stage, the sixth is yet another biological stage, and the seventh is yet another speed up zone. The only real catch of the final stage is that, at one point, the whole level rotates ninety degrees, and then scroll vertically while the Vic Viper is still oriented horizontally. The only real area where Gradius IV shows any innovation are the boss battles, which are just as inventive as the brilliant ones in Gradius Gaiden. However, since this was designed for the arcades, it also heralds the return of the high difficulty of the earlier Gradius games. It sits slightly below the madness that is Gradius III, but it’s about the same level as Gradius II. 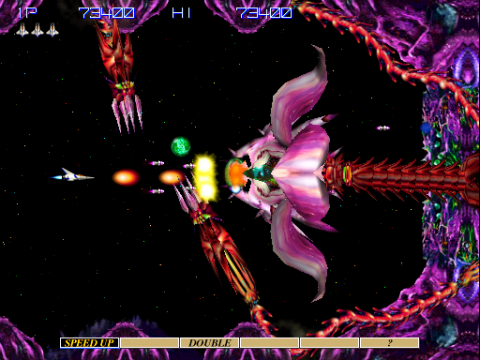 The two-player mode from Gradius Gaiden is gone. So, too, are any of the weapon edit modes, and most of the configurations from the previous games. There are a few new weapons, like the Armor Piercing Gun and the Flying Torpedo, but overall the arsenal selection is severely lacking. And even though the graphics are technically better, they still lack a lot of the beautiful detail that made Gradius Gaiden so gorgeous. They’re clean and shiny, but characterless. 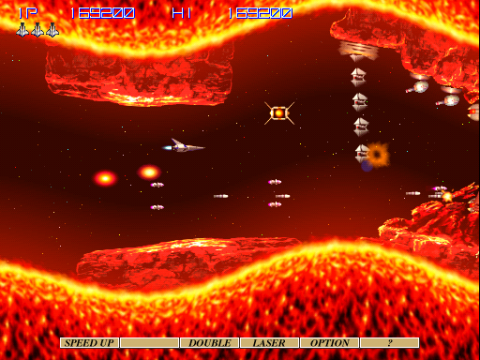 The music is a throwback to the peppy synth from the earlier games, and the result is mixed. There are some good tracks, but compared to the instrumentation of Gaiden, it sounds uninspired. The soundtrack was composed by Atsuki Watanabe, who contributed to many Guitar Freaks and Drummania titles. 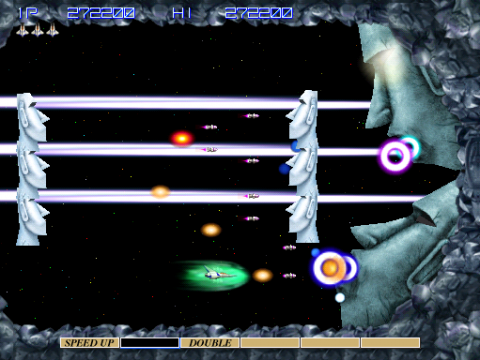 Since it feels like such a redux, with very little added to the formula and almost nothing carried over from Gaiden, Gradius IV just seems redundant. It’s not terrible, but it’s really only worth investigating for hardcore fans and completionists. 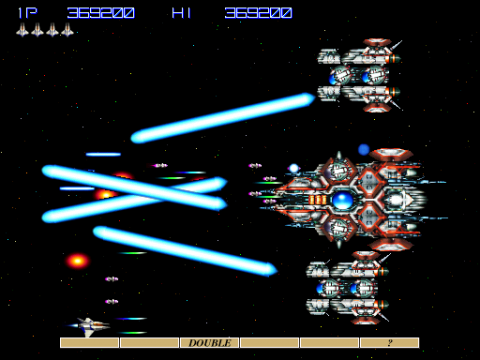 Gradius IV was initially released in Japanese arcades, and eventually made it onto the PlayStation 2 with the Gradius III & IV compilation. It lacks the cool checkpoint system from the PS2 Gradius III, which allowed you to restart at any point in any level you had already cleared, although a Boss Rush and Level Select is opened when you beat the game. The version on the PSP Gradius Collection allows you to save the game at any time to restart at the last checkpoint. 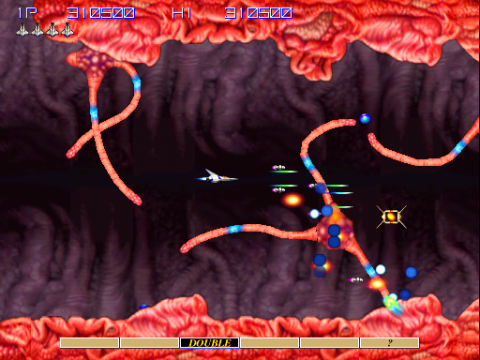